“In the Light of a Shadow” (2021), installation view. Photo by Tony Luong. All images courtesy of MASS MoCA, shared with permission

Rocky debris, vintage photographs, and a wooden ship colliding with its own hull are suspended above a 100-yard gallery at MASS MoCA for “In the Light of a Shadow.” The work of Los Angeles-born artist Glenn Kaino (previously), the monumental installation generates a sprawling environment filled with thousands of floating elements that speak to the vast impact of protest and collective movements.

Lined with an aisle of light and constantly moving shadows, the hovering artworks fuse memories of past injustices and a brighter, hopeful path forward in an immersive experience. Specifically, Kaino uses “In the Light of a Shadow” as a response to the horrific events of Bloody Sunday in both Selma, Alabama, and Derry, Northern Ireland. He models the wrecked ship after the Shadow V, a modest boat Lord Mountbatten often used for fishing, that the Irish Republican Army bombed in 1979 to assassinate the member of the royal family.

The towering display is also paired with a metal sculpture comprised of tuned bars that emit the melody from U2’s protest anthem “Sunday Bloody Sunday” when pinged in succession. A collaborative video with singer and activist Deon Jones, who police nearly blinded after shooting with a rubber bullet for protesting George Floyd’s murder, plays nearby, drawing together the historic tragedies with those happening today.

“In the Light of a Shadow” is on view through September 5. Find more of Kaino’s works, which span installation and sculpture to film, on his site. “In the Light of a Shadow” (2021), installation view. Photo by Will McLaughlin 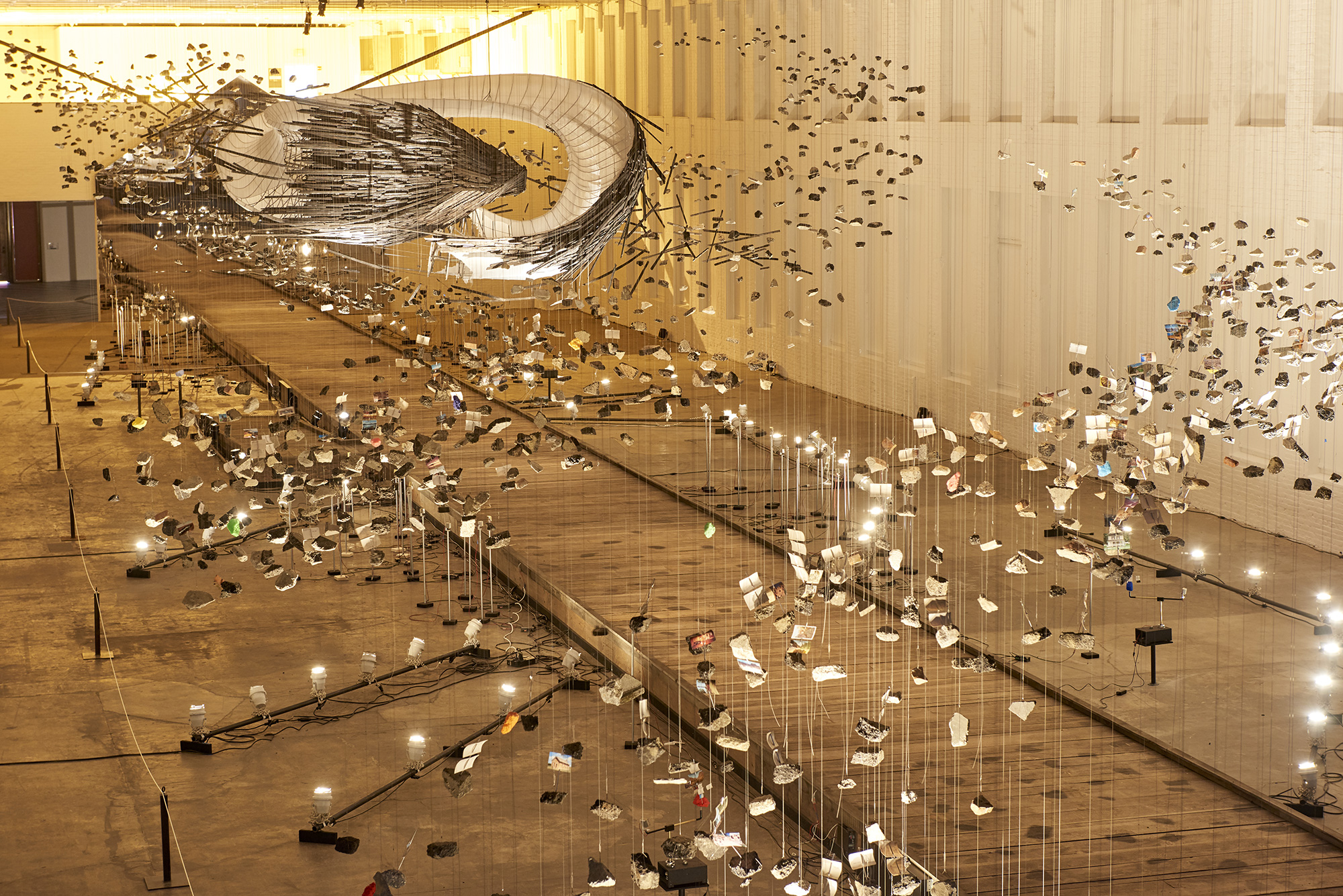 Starting in 2013, Los Angeles-based conceptual artist Glenn Kaino has had the opportunity to meet and collaborate with a man whose act of protest had long inspired him. “Bridge” is Kaino’s 100-foot long construction featuring two hundred casts of former American track and field runner and Olympic gold medalist Tommie Smith’s arm, which he raised as a human rights salute during the National Anthem after taking gold at the 1968 Summer Olympics. Kaino’s work will be installed as a part of a larger exhibition at the High Museum in Atlanta in fall 2018. We spoke with the artist to learn more about how his collaboration with Smith came to be.

On the podium of the 1968 Summer Olympics in Mexico, African American medalists Tommie Smith and John Carlos went from being top-performing athletes representing the United States to legendary activists with a simple yet powerful gesture. The photograph of Smith and Carlos with their heads lowered and their leather-clad fists raised is one of the most iconic images of the 20th century, and Kaino tells Colossal that it is one that he used to have taped to the side of his iMac.

A friend of Kaino’s noticed the picture and referred to Tommie as “Coach Smith,” revealing that he knew the former athlete from his days as track coach. The friend set up the meeting, and Kaino soon found himself at Coach Smith’s home in Atlanta, watching tape of the race in slow motion as Tommie broke it down almost frame by frame. “I didn’t have a pitch,” Kaino said of the way he finally approached the topic of collaboration with the gold medalist and his wife, “but I did have an observation.” He noticed that Tommie Smith’s home was like a “time bubble,” with memorabilia and references to his career and to his most famous moment. Kaino says that as someone who was born after the salute, the image has always been symbolic, but for the Smiths it was personal. “You shook my hand with that arm, you brush your teeth with that arm,” he said to Tommie.

Through the conversation, Kaino convinced Tommie to collaborate on a project that would remove the icon (the arm) from his body and help him see the salute the way that others do. Back in Los Angeles, after experimenting with what Kaino believes to have been the arm of an Aquaman figure, they got to work casting Smith’s arm and clenched fist. He used the cast to create hundreds of fiberglass arms, which he then painted gold and hung from wires to form, according to the artist’s website, “a golden path leading forward from the present but connected to the past, a spectacular reconciliation of a historic record, an individual memory, and a public symbol all renegotiated in an infrastructure of time to creates stories of the now.”

As for connecting the past and present, it is interesting to consider Kaino’s work and Smith’s salute as it relates to Black athletes today, like Colin Kaepernick, who are criticized for publicly protesting similar issues 50 years later. Kaino tells Colossal that he is working on a documentary to tell Smith’s story that goes deeper than the one image that everyone knows. For those who want to see “Bridge” in person, the exhibition, titled With Drawn Arms: Glenn Kaino and Tommie Smith, opens in Atlanta, Georgia at the High Museum on September 29, 2018. (via Artnet)