“My soul ain’t for sale” by Nicole Rafiki

The team at Puzzles with Purpose launched a multi-pronged initiative last fall that directly supports artists and charities around the globe while giving the rest of us a much-needed distraction. Art X Puzzles tasked more than 80 creatives—the list includes Louise Lawler, Nicole Rafiki, Spencer Tunick (previously), and Pixy Liao—with producing a unique work for a limited-edition jigsaw and choosing a social-justice or COVID-relief organization to share proceeds with. The paper, wood, or magnetic puzzles vary in size and difficulty and are accompanied by an engraved USB drive with a certificate of authentication, the original image, and information about the artist. We’ve gathered some of our favorite works below, but you can shop the entire collection on Puzzles with Purpose’s site.

“WHATS COOLER THAN BEING COOL?” by Mario Moore “Things We Talk About” by Pixy Liao “Woman with Goat and Surgical Mask” by Kharis Kennedy As interest in analog entertainment for children grows, a new collection from ESNAF Toys prompts kids to piece together giraffes, foxes, and T-rexes from simple, wooden blocks. Each geometric shape is handcrafted and color-coded. To create an anatomically accurate animal or dinosaur, simply match and connect the magnetic joints.

Helmed by architects Bistra and Anastas, ESNAF Toys was born out of the duo’s desire to provide their son with higher-quality entertainment. “Our home became cluttered with baby toys, and we didn’t like it. Looking at all those toys, we realized that very few of them were made with natural materials that would last for decades. Few were what we would call ‘smart’ toys, objects whose use could evolve together with our child,” Bistra says. This dissatisfaction inspired Anastas to utilize old floorboards to create the prototype for the minimal toys that the company offers today.

Check out the video below to dive into ESNAF Toys’ history and see more of its new dinosaur collection, which recently surpassed its fundraising goal on Kickstarter. Until that prehistoric line is released, you can pick up some of the mammalian designs from Etsy or its shop. 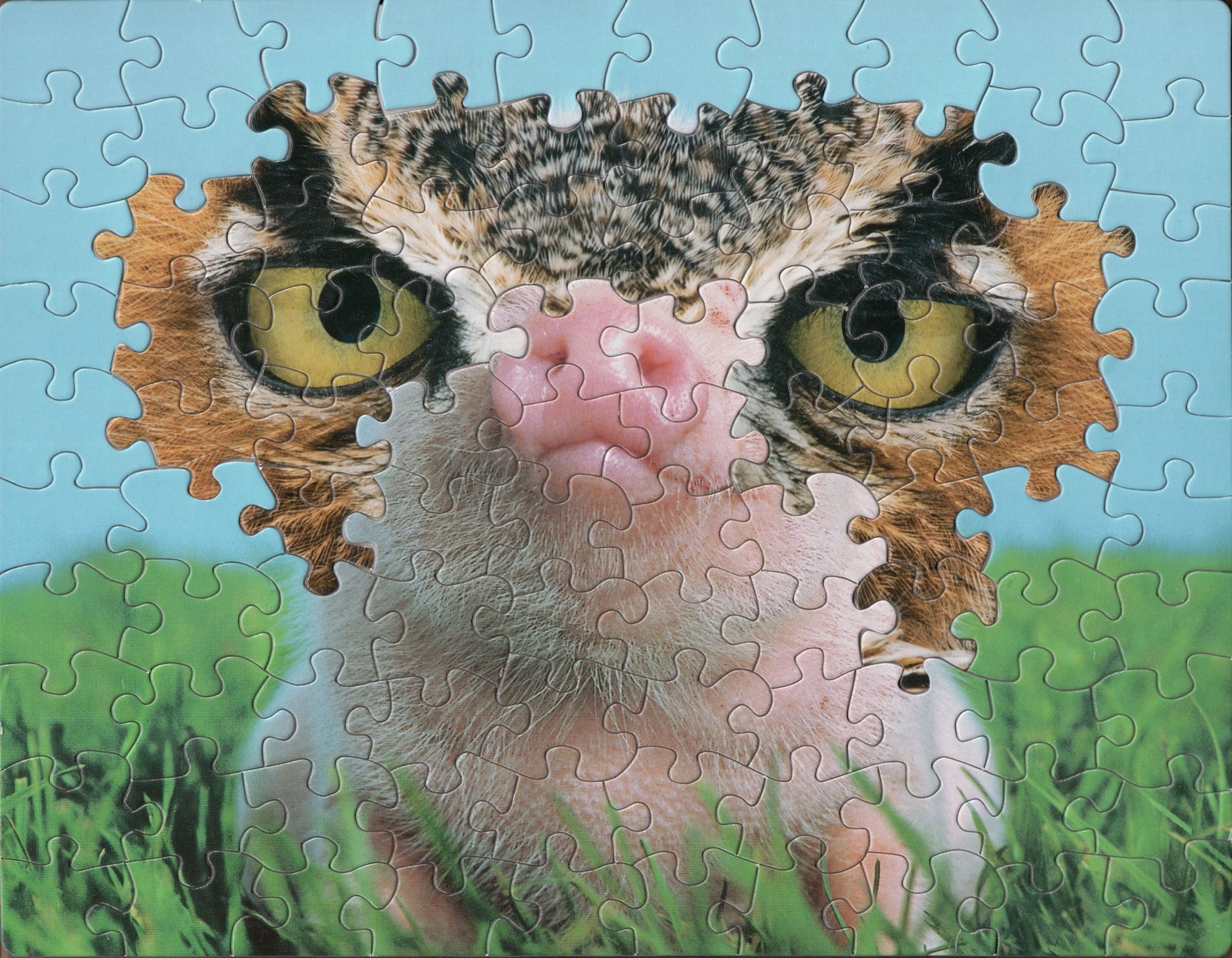 Although there’s seemingly only one way to assemble a jigsaw puzzle, Tim Klein (previously) has diverged from the traditional method of following the photo on the box to assemble unusual arrangements of hybrid animals and everyday objects. The Vancouver, Washington-based artist combines two vintage puzzles that are similar in composition, creating bizarre amalgamations that position a hedgehog on top of a muffin and mask George Washington’s face with verdant greenery and a waterfall.

In a statement, Klein said he often utilizes die-cut pieces from the same manufacturer, which allows him to plug in portions from two different sets. “I take great pleasure in discovering such strange images lying shattered, sometimes for decades, within the cardboard boxes of ordinary mass-produced puzzles,” the artist said.

Although many of Klein’s puzzles are sold out—he notes that he needs more source material to create more—you can follow the humorous combinations on Facebook. 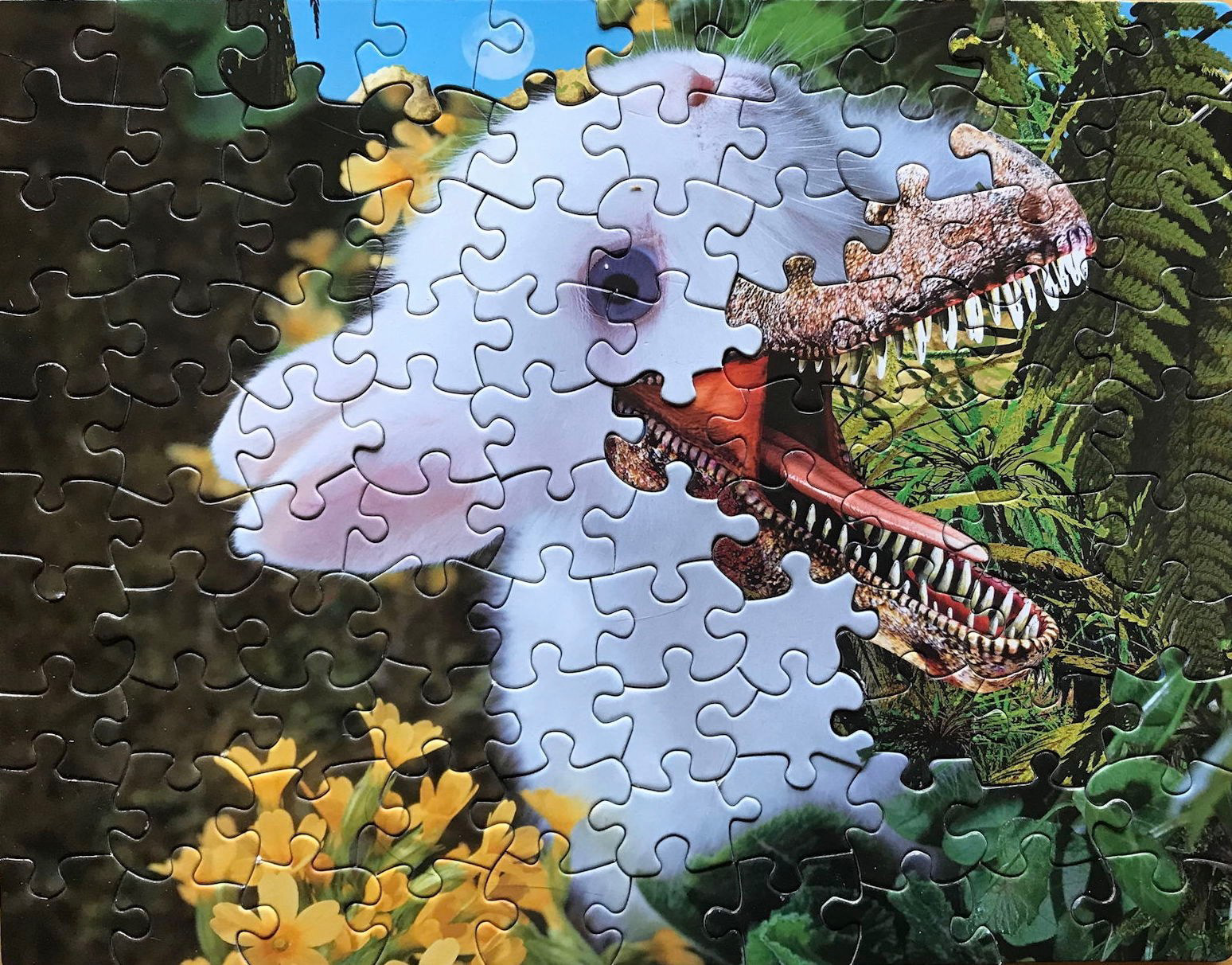 While most shattered glass heads straight to the trash, Yelldesign’s panes actually can be reassembled into a single sheet, turning a groan-inducing mistake into a delightfully tedious activity. Comically titled “The Accident,” the acrylic puzzle is comprised of 215 jagged and cracked pieces resembling a broken window. Yelldesign warns, though, that although you don’t have to worry about getting cut or scratched by the pointed edges, assembly isn’t an easy feat.

An animation studio venturing into design, the company also released two other clear puzzles: “The Fish Tank” surrounds an orange guppy in the form of a single piece, while “The Virus” contains a green contagion at its center. These jigsaws come amid an ongoing boom in puzzle sales as people around the world are looking to occupy themselves in quarantine.

To pick up your own humorous puzzle, head to Yelldesign’s site (a heads up that all prices are in AUD). Follow the company on Instagram and Vimeo, too.