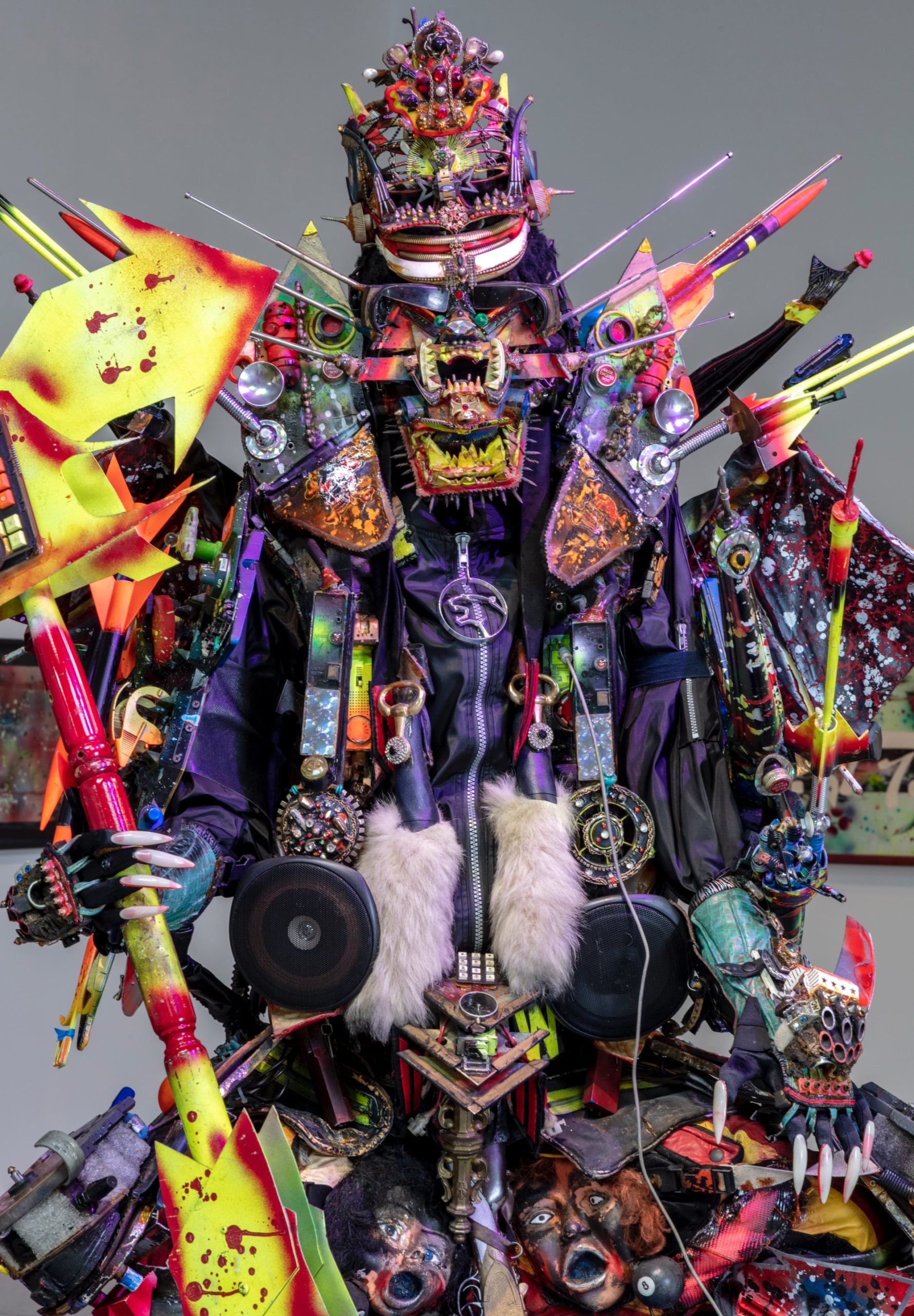 At Jeffrey Deitch in Los Angeles, dozens of spacecraft constructed from skateboards, salvaged plastics, and scrap materials descend from the ceiling in a seeming rescue mission. Awash in blue light, the vehicles hover above the galleries filled with assemblages in a similar vein, from small otherworldly troopers to life-sized characters elaborately outfitted with headdresses of fur and spray-painted crowns.

The immersive, post-apocalyptic collection unveils the idiosyncratic workings of the late artist Rammellzee, whose fantastic creations rose to cult status in the 1980s alongside Jean-Michel Basquiat (previously) and Keith Haring (previously). Rammellzee started tagging along the route of New York City’s A train and continually espoused the subversive powers of graffiti and writing as his career ventured into fine art, music, performance, and philosophy. “The letter is armed to stop all the phony formations, lies, and tricknowlegies placed upon its structure,” the artist once wrote. “You think war is always shooting and beating everybody, but no, we had the letters fight for us.” These ideas found Rammellzee’s philosophy of Gothic Futurism—author David Tompkins describes this as a manifesto “in which the alphabet revolts against being institutionalized, locked into the system that is magnetized to our fridge doors”—and the exhibition draws its title from this ideology. Spanning decades of the artist’s work, the show is broad and enveloping, transporting viewers into an esoteric, linguistically grounded world with references to metaphysics, medieval history, and philology.

Surrounded by dozens of paintings, Rammellzee’s hefty, extravagant suits, which he often wore when in public and termed Garbage Gods, loom over the space. Some of the intergalactic costumes weigh upwards of 100 pounds, and all reflect the artist’s impulse for armor and fighting against convention. The racers appear to culminate at the elaborate “Gasholeer” piece, for example, which is even complete with a flamethrower.

If you’re in Los Angeles, you can see Gothic Futurism at Jeffrey Deitch through January 14.