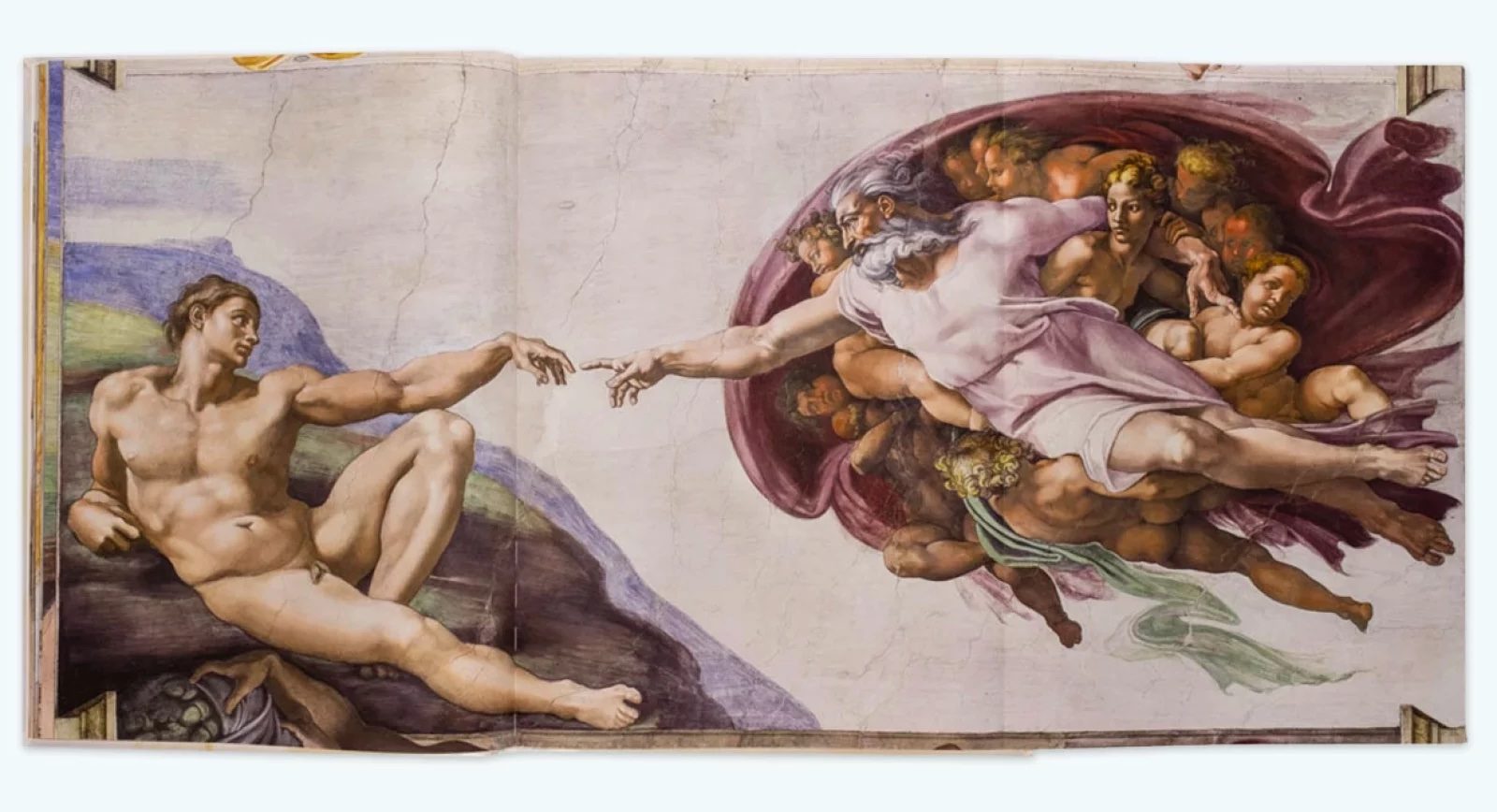 All images courtesy of Callaway Arts and Entertainment and Scripta Maneant

Millions of tourists stream through the hallowed halls of Vatican City to see one of Western art history’s most treasured artworks: Michelangelo’s Sistine Chapel. Gazing up 44 feet from the floor, visitors witness dramatic biblical scenes unfold throughout the monumental painting as it sprawls across the expansive architecture. The only drawback of looking up at such a height is that it’s difficult to discern smaller features and subtleties. The Sistine Chapel, a massive three-volume tome published by Callaway Arts and Entertainment and Italy’s Scripta Maneant, is dedicated to the details and presents up-close 1:1 scale images of the artist’s seminal painting in a limited-edition book.

Reminiscent of the way Michelangelo erected scaffolding to paint the scenes over 500 years ago, over the course of 65 nights, two photographers ascended a 33-foot scaffolding to access close views of the ceiling. The structure was assembled and disassembled every evening to allow tourists to visit during the day. Approximately 270,000 high-resolution images captured the incredible characteristics of movement, contrast, and expression that cannot be seen from ground level.

Printed in Italian and English and limited to 1999 copies by the Vatican—which also stipulated there will be no reprints—only a few English language copies remain, although the price tag is an eye-watering $22,000. The 20-pound set includes additional masterpieces by Michelangelo, Botticelli, and other Renaissance artists. (via Kottke) In the 1500’s self-taught artist and nun Plautilla Nelli created a life-size mural of Jesus and the twelve apostles at the Last Supper. Spanning 21 feet feet, the vibrantly colored painting includes carefully rendered details including wine chalices, salt cellars, wood panelling, and a rhythmically creased tablecloth. In addition to the inanimate objects depicted, Nelli demonstrated impressive facility with human anatomy in her renderings of the religious figures—at the time, women were barred from studying the field of anatomy.

Nelli’s masterpiece stayed for two centuries at her convent, Santa Caterina, and then changed locations a few times before being unstretched, rolled, and put in storage about a hundred years ago. After an initial restoration and then additional damage due to flooding in the 1960’s, The Last Supper has been undergoing restoration for the past four years. Brought back to life by an all-female team of curators, restorers, and scientists at Advancing Women Artists, it is now on permanent display at the Santa Maria Novella Museum in Florence, Italy. (via artnet, Smithsonian Magazine) Interdisciplinary artist Suzanne Jongmans uses her skills as a sculptor and costume designer to create recycled garments from packing materials such as Styrofoam, plastic sheets, and segments of thick bubble wrap. The costumes take the form of elaborate bonnets and high collared dresses which are then photographed on subjects in poses reminiscent of portrait styles from the 15th, 16th, and 17th centuries. Specifically the Dutch artist references paintings created by artists such as Rembrandt, Holbein the Younger, and Rogier van der Weyden in her styled photographs.

Jongmans draws connections between contemporary disposable materials and the aesthetics of fine silks or lace, presenting creative takes on centuries-old clothing. “The idea of making something out of nothing changes our look on reality,” she explains. “…Most people throw that [foam] away. I make clothing out of it; foam is my textile.” You can see more of her portraits and garments sculpted from recycled materials on her website and Facebook. Notation Knives: Listen to Cutting Edge Music From the Renaissance

It’s not exactly musical chairs, but this Renaissance-era cutlery can carry a tune at any table setting. Dating back to the 16th century, these extremely rare knives are engraved with musical scores complete with lyrics. On one side is a benediction that may have been sung before a meal, and then a grace on the reverse side that was sung after eating. For instance the knife below reads: “The blessing of the table. May the three-in-one bless that which we are about to eat.” And the other side reads: “The saying of grace. We give thanks to you God for your generosity.”

Left & right views of an etched, engraved and gilded steel knife with ivory, brass and silver handle, by an unknown maker, Italy, 1500–50.

What isn’t clear to historians is how this may have all played out in actuality. It would be uncommon for a wealthy Italian family who might have possessed such opulent knives to cut their own meat, the task instead performed by a squire. But perhaps they were reserved only for special ceremonies or holidays. Kristen Kalber, a curator at the Victoria and Albert Museum where some of these knives are kept, lays out a few theories in the video below.

Luckily for us the V&A’s Medieval & Renaissance Galleries approached the Royal College of Music to create recordings of what the music on the notation knives sounds like when performed by a choir. Here are examples of a benediction and grace from one knife, but you can hear additional recordings on the V&A website. (via My Modern Met, Open Culture, WQXR) Chicago-based photographer Freddy Fabris has worked for years on commercial projets for clients like Leo Burnett, Saatchi & Saatchi, and Ogilvy & Mather, but it was a recent decision to focus on a personal project exploded into a bevy of awards and accolades. Fabris, who has a background in painting, had long been ruminating about how to pay tribute to the works of classic painters like Rembrandt and Da Vinci using his camera. While accompanying a friend to a cluttered auto repair shop, inspiration suddenly struck. Fabris would pose the mechanics in the style of classical portraits, and in tableaus reminiscent of Philippe de Champaigne’s The Last Supper and Michelangelo’s The Creation of Adam. As he shared the idea with colleagues and collaborators, everyone quickly jumped on board and the Renaissance series was born.

While the photos are admittedly absurd, the staggering amount of craft and skill present in each shot is undeniable. From the careful composition of bodies to the striking use of light to illuminate the face of each subject, the portraits in particular are strangely dignifying. The photos have since won the 1st Place International Color Award, the One Eyeland Silver Award, and an APA Conceptual Award. You can explore more of Fabris’ work on his website.