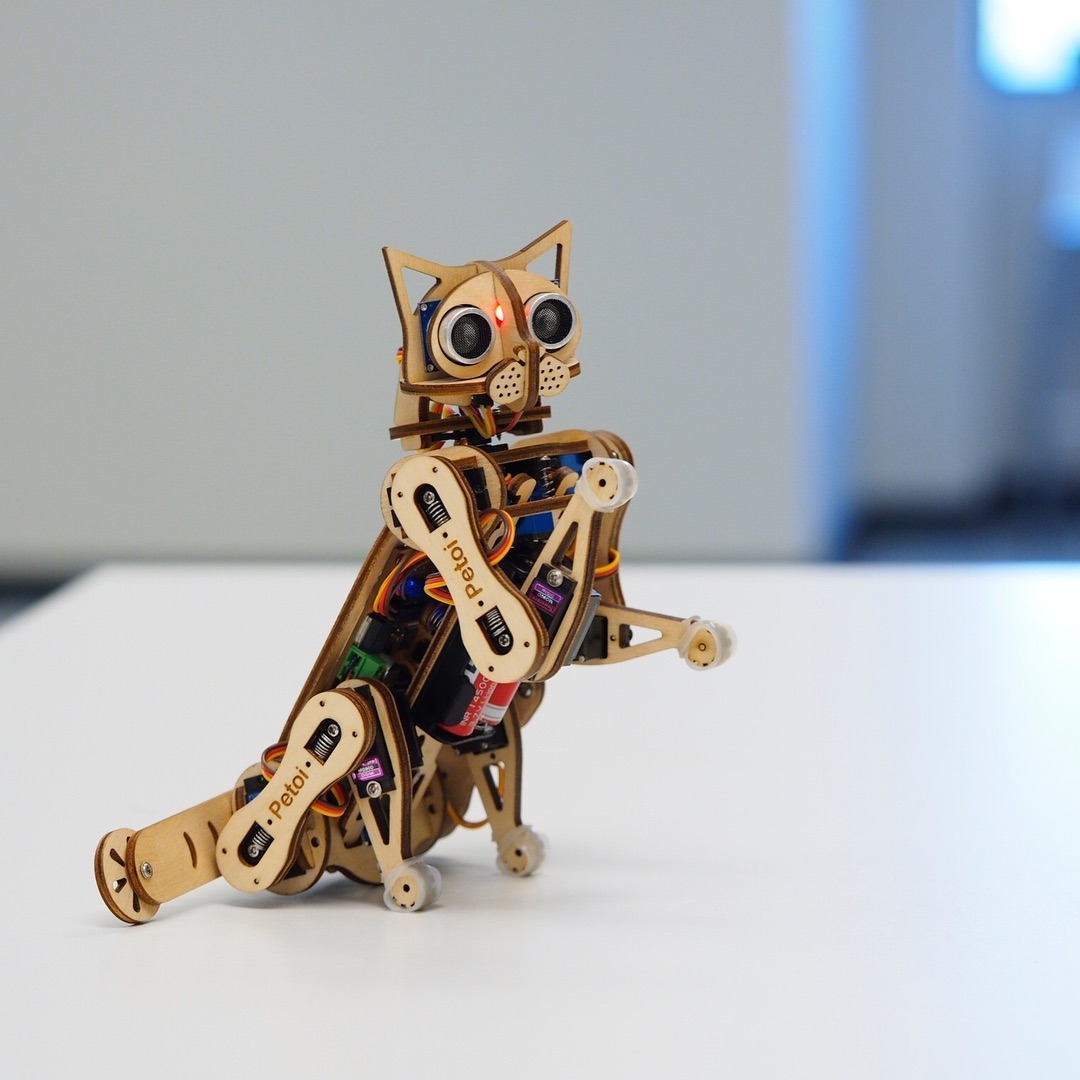 Try your hand at robotics with Nybble, a programmable cat that walks, bats its paws, and even regains its balance after a jump from a tall surface. The cat is the brainchild of RongzhongLi of Petoi, who built the feline robot on an open source platform that runs on an Arduino micro-controller, and funded the project on Indiegogo. A wooden puzzle forms the cat’s basic frame, while a small computer imbedded in its torso directs its movements. Instructional videos for how to put the kit together can be found on Petoi’s website, and an overview of the robotic animal’s tricks and abilities can be found in the video below. (via Laughing Squid) The JSK Lab at the University of Tokyo has designed a modular flying robot that propels itself through the air with several small fans. The entire device is built to autonomously alter its shape during flight, allowing the robot to maneuver its way through obstacles that might obscure its path. The robot is named DRAGON, which is a simplified way of saying “Dual-rotor embedded multilink Robot with the Ability of multi-deGree-of-freedom aerial transformatiON.

The project’s researchers imagine the robot to eventually act as a flying arm, moving its way through the air as it picks up and moves objects with a two-fingered grip. The linked modules that compose DRAGON’s body are connected via hinged joints and the entire structure is driven by an Intel Euclid which allows for a 3 minute run time. The above video shows the robot shape-shifting from a circular configuration to a snake-like object in order to pass through a small hole in the grid that lies above.

DRAGON was presented as a part of the paper “Design, Modeling and Control of Aerial Robot DRAGON: Dual-Rotor Embedded Multilink Robot with the Ability of Multi-Degree-of-Freedom Aerial Transformation,” by researchers Moju Zhao, Tomoki Anzai, Fan Shi, Xiangyu Chen, Kei Okada, and Masayuki Inaba at the International Conference on Robotics and Automation 2018 in Brisbane, Australia in May. (via The Kid Should See This) Scribit: the Programmable Robot that Draws on Walls (on Purpose)

Invented by MIT Professor Carlo Ratti, the Scribit is a new robot drawing machine that creates text and images using erasable inks. The project’s creators bill it as a useful tool in work environments as well as an easy and interchangeable way to decorate one’s home. The robot draws its imagery either from an app or from files that users upload themselves. Scribit is currently funding on Kickstarter, where it reached its goal within two hours. Scientists at MIT have pulled up a very tiny curtain on their newest invention: a 1.7cm square robot capable of assembling itself like a piece of origami. The Untethered Miniature Origami Robot is powered by a small neodymium magnet and four electromagnetic coils underneath the robot’s surface that create magnet fields necessary for it to operate. The small robot can walk on different surfaces, climb, carry objects twice its own weight, swim in shallow water, burrow, and it even completely dissolves in an acetone solution leaving behind just the magnet.

So what can we do with super tiny self-folding robots? Researchers hope to develop even smaller autonomous robots with additional sensors that can dissolve in water. Such tiny devices could have a variety of medical uses when introduced inside of a human body, maybe zapping cancer cells or cleaning clogged arteries. You can read more about it over at IEEE and in this research paper. (via Laughing Squid)

The Cubli: A Gravity-Defying Cube that Can Jump, Balance, and Walk Designed by a team at the Institute for Dynamic Systems and Control, ETH Zurich, Switzerland, the Cubeli is a small cube capable of balancing, walking, and jumping on its own. The device contains a trio of reaction wheels that rotate extremely fast and can be controlled in speed and combination to create gravity-defying tricks shown here. The video above suggests potential uses such as planetary exploration or self-assembling robots (perhaps similar to MIT’s self-assembling M-Blocks), but I suggest we could use these for the purpose of being under my Christmas tree.