The fate of riders on roller coasters and ferris wheels takes an unexpected turn in “Beautiful Chaos”, a new short from Fernando Livschitz of Black Sheep Films (previously). We won’t give too much away, but the minute-long animation uses digital editing to make amusement park rides perform stomach-churning tricks. Let’s just say… don’t try this at home.  Watch more of Livschitz’s animations on Vimeo and Instagram.

In this video by YouTube user Jeb Corliss, the adventurer takes his Go Pro camera to Six Flags Magic Mountain to film his front row ride through one of the park’s many roller coasters. As Corliss flies through the ride’s twists and turns, the camera creates one mind-bending distortion after another. By putting the footage through stabilization during the stitching process, he and the other passengers loop alongside the rollercoaster with a blown out perspective similar to a fisheye lens. 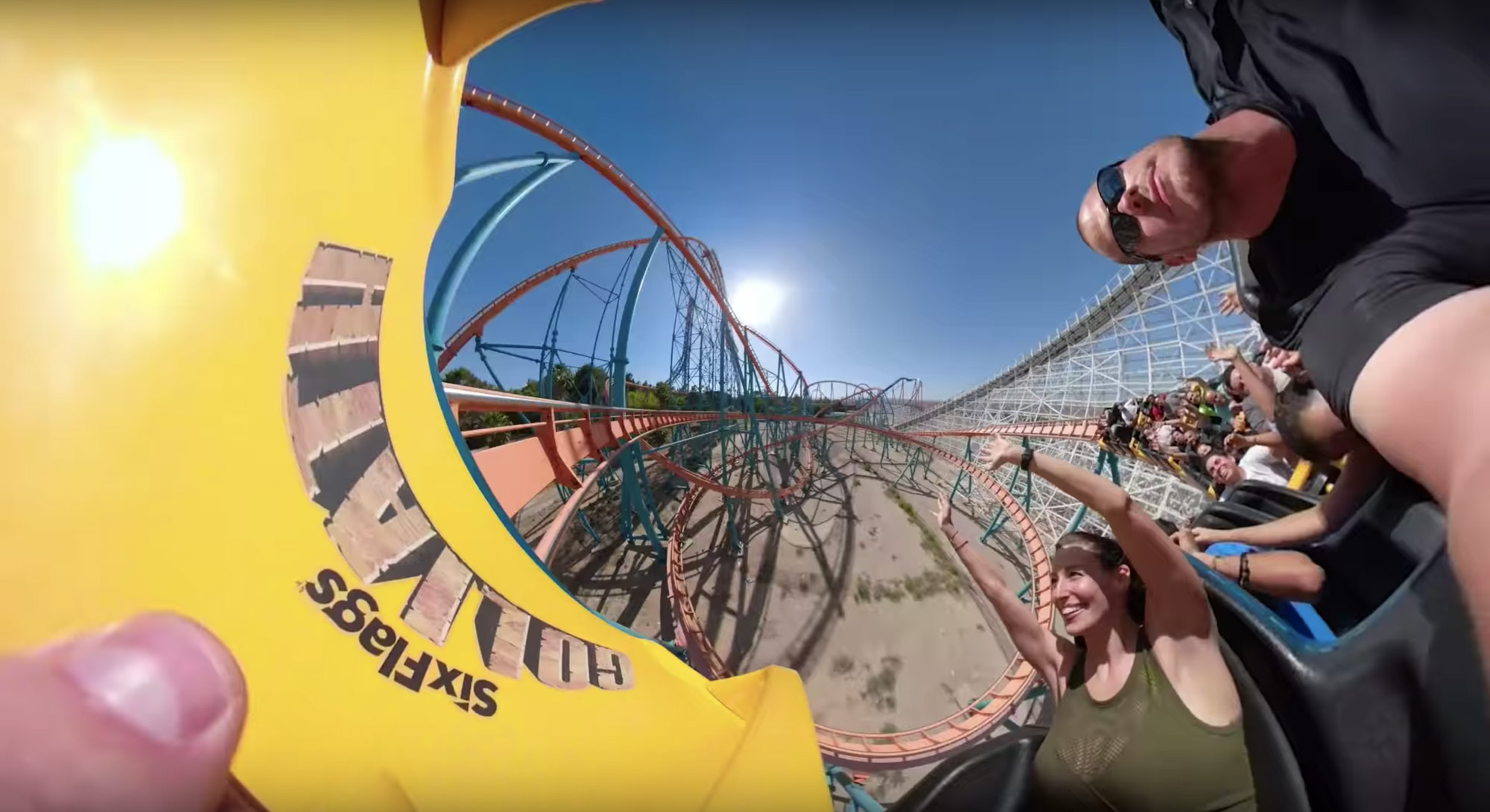 Early last year, artist Bovey Lee (previously) made the move from Pittsburgh to Los Angeles, experiencing the overwhelming emotions and turmoil one faces when moving across the country. As a way to reconcile the differences between the two cities, Bovey began working on a new body of cut rice paper artworks that display the features and landscapes of her old and new lives as if twisted together on the spiraling tracks of rollercoasters.

Cut by hand from Chinese xuan paper, the pieces depict collisions of skyscrapers and flower bouquets, buffalos carrying mountainous stacks of suitcases, and in a piece titled Eternity – The Rescuer tumbling wedding cakes are surrounded by storm clouds. She shares with us about the new work:

Speaking to the motivation of my relocation, the works also feature imagery associated with romantic relationships, and wedding bouquets, engagement rings, cakes, and eternity symbols populate the pieces. In these works, I draw parallels between one’s romantic relationship and our relationship with nature. While seeking balance, eternity, stability, and harmony in both relationships, the journey we take on are often complex, dramatic, changing, and lopsided. But there is also incredible beauty, energy, richness, and even whimsy in chaos and imperfections through the ups and downs, and trial and error.

Many of these pieces will be on view starting next week at Gavlak Gallery for her show titled Divertical (a name taken from the world’s tallest water rollercoaster) starting January 9th. What you see here is just a fraction of her latest art, see plenty more in her 2015 gallery. All images via Baptiste Debombourg Baptiste Debombourg (previously here and here) has transformed a public square using the very objects that typically occupy it—taking 1,200 café chairs and forming them into an elaborate roller coaster. Although the installation is static, Debombourg created movement within the sculpture by incorporating six bright colors and four sky-high loops that twist and turn far from the ground.

The installation, titled Stellar, was built as a part of Le Voyage à Nantes, and will be located within the Place du Bouffay in Nantes, France until August 20th. Its inspiration stems from addressing the great presence of outdoor cafés and restaurants within the city center, as well as an artwork Robert Delaunay produced for the Paris World’s Fair in 1937. (via Junk Culture) Could this be the most meta thing on the entire internet? Just so we’re clear, the title isn’t a typo. This really is a GIF of a Vine of a video of a flipbook of a GIF of a video of a roller coaster. Created yesterday by Televandalist using a handy Flipbookit.