Inventor Simone Giertz Converted Her Tesla Into... a Truckla

Famed inventor Simone Giertz (previously) is most well-known for her devices that attempt to complete basic tasks in a comically dysfunctional manner. However, after Giertz purchased a Tesla sedan she set out to make the vehicle more functional. Because she uses lots of large supplies and tools to construct her quirky robotic machines, Giertz found that the open design of a truck bed and racks would be better suited to her lifestyle than a segmented sedan. Instead of buying a different vehicle, she transformed her Tesla into a custom truck that she has dubbed the “Truckla”.

You can watch the behind-the-scenes process video above, as well as Giertz’s parody ad for her invented vehicle (below), the tagline for which is “available nowhere”. See more of the San Francisco-based inventor’s videos, including one where she turned a piece of her radiation treatment into a lamp, on YouTube and Twitter. The Kei Truck, or kei-tora for short, is a tiny but practical vehicle that originated in Japan. Although these days it’s widely used throughout Asia and other parts of the world, in Japan you’ll often see them used in the construction and agriculture industries as they can maneuver through small side streets and easily park. And in a more recent turn of events, apparently they’re also used as a canvas for gardening contests.

The Kei Truck Garden Contest is an annual event sponsored by the Japan Federation of Landscape Contractors. Numerous landscaping contractors from around Japan participate by arriving on site with their mini trucks and then spending several hours transforming the cargo bed into a garden.

Other than using the kei truck there are very few limitations and landscapers have incorporated everything from benches and aquariums to elements of lighting into their designs. Judges then rank the entries based on planning, expression, design, execution and environment.

We’ve included a few of our favorite entries here but you can see more on the website of the Osaka branch, as well as this PDF from the Hanshin branch. (Syndicated from Spoon & Tamago) Thanks to French artist Benedetto Bufalino, you can now dance the night away at a construction site turned night club with the help of his new Diso Ball Cement Mixer. The truck was parked from December 8-10 in Lyon, France where bright spotlights pointed at the truck turned the streets and building facades into swirling dance party. The spectacle apparently grabbed the attention of quite a few passersby who stopped to take photos and film the otherwise mundane work site that was transformed for a few hours each night.

Bufalino is known for his unconventional approach to urban interventions, frequently installing active aquariums into phone booths and creating a variety of public art pieces in unexpected places. (via Designboom) 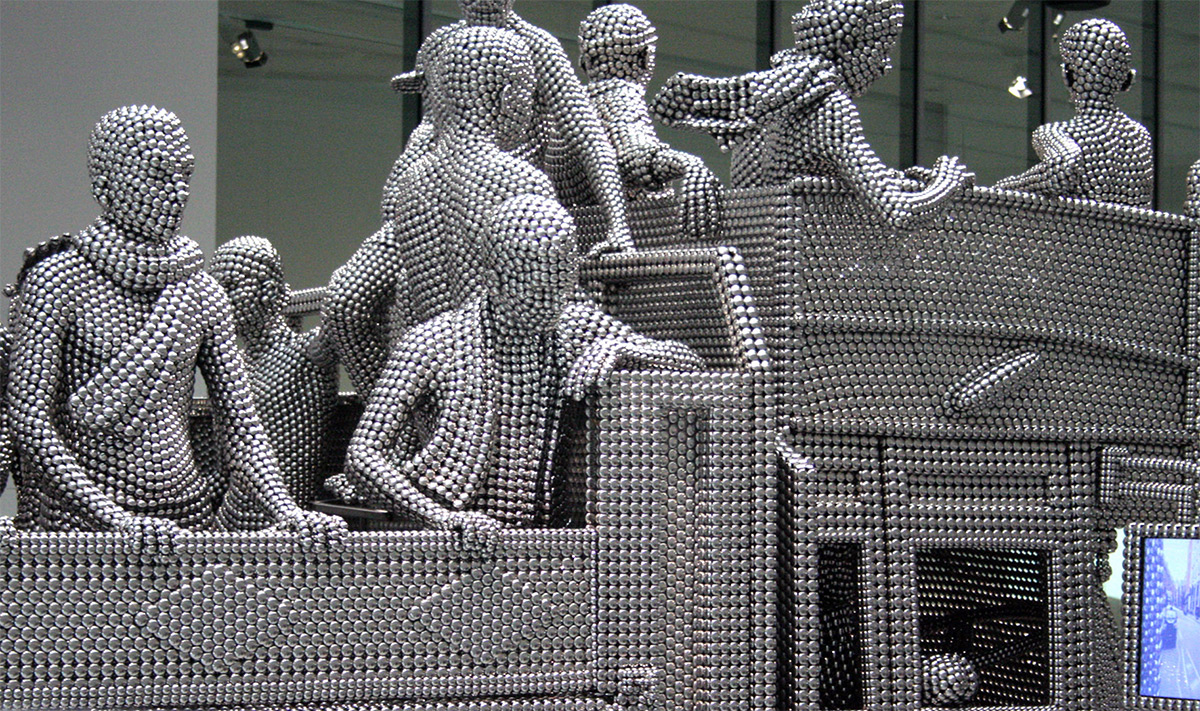 Transit is a 2010 sculpture by Mumbai-based artist Valay Shende depicting a life-size work truck that carries figures of 22 people. Created over a period of 18 months, the piece was constructed from thousands of reflective stainless steel disks that have been individually spot welded together. Shende conceived of Transit as commentary on a dramatic rash of farmer sucides in India over the last decade. The truck’s rearview mirrors display video footage of roadways in London, Mumbai and Dubai, as if the vehicle is moving from the perspective of the driver’s seat but in reality it remains stationary. Transit is currently on view at the Mumbai City Museum, and you can read more about it on Indian Express. Images courtesy Sakshi Gallery. (via Jeremy Mayer)