Entomologist and adventurer Phil Torres hosts a popular YouTube Channel, The Jungle Diaries, where he shares insights and observations from his travels to remote areas around the world. Recently, a trip to the Peruvian Amazon afforded footage of eight different butterfly species alighting on turtles to drink their tears. The phenomenon occurs because the sodium in the tears is a vital part of the butterflies’ diet that’s not readily available in the foods they consume. The search for sodium is actually quite common in the wild, and is also sourced from jaguar feces and river mud, as Torres notes.

You can follow along with more of Torres’s discovery-filled travels on Instagram and Twitter. Also check out photographer Mark Cowan’s amazing snapshot of a caiman sporting a crown of tear-drinking butterflies from 2016. (via Lustik) New work from Lisa Ericson (previously) continues the Portland-based artist’s hyperrealistic compositions of animals. Set on deep black backgrounds, her paintings showcase unusual combinations of peacefully co-existing fauna. Pelicans support rabbits, snakes, and ocelots, while tree frogs and songbirds find homes on the shells of turtles. Her most recent paintings are on view through May 25 at Antler Gallery in Portland, in a show titled Invisible Promise, alongside work from Scottish artist Lindsey Carr. You can see more from Ericson on Instagram. 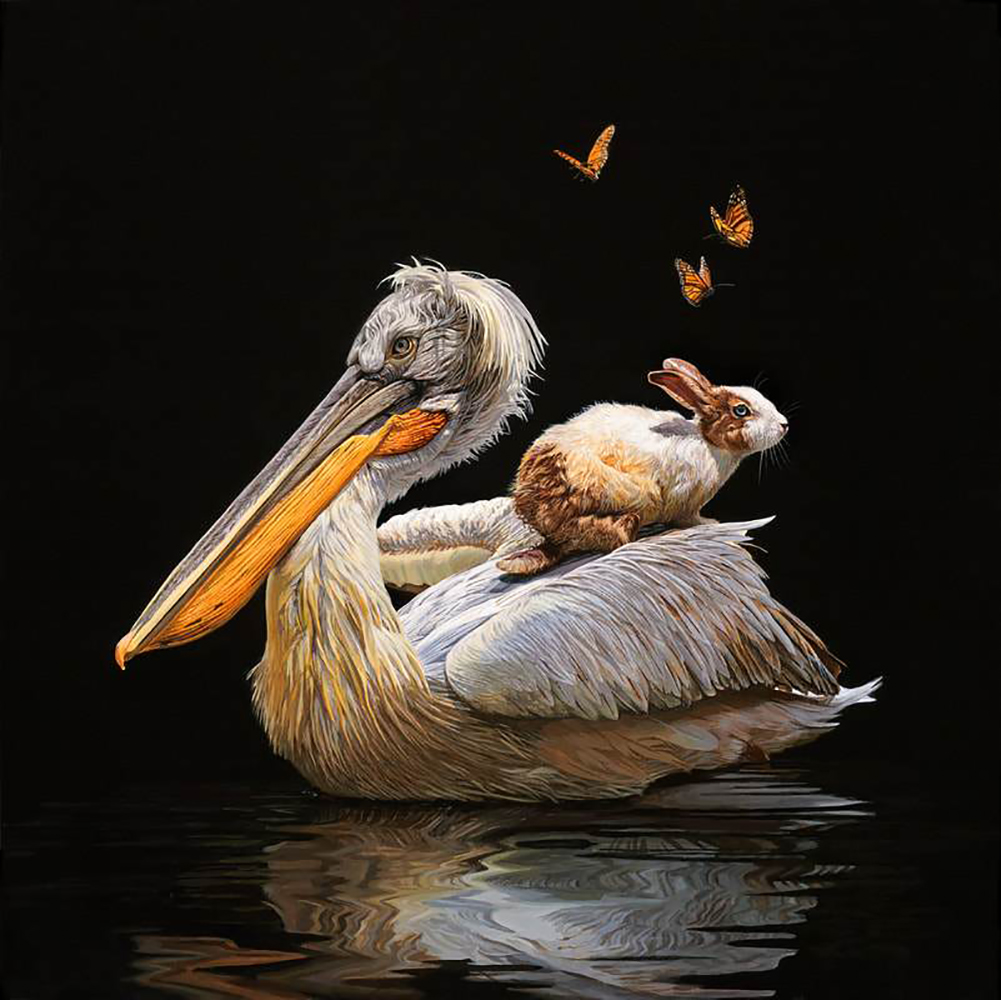 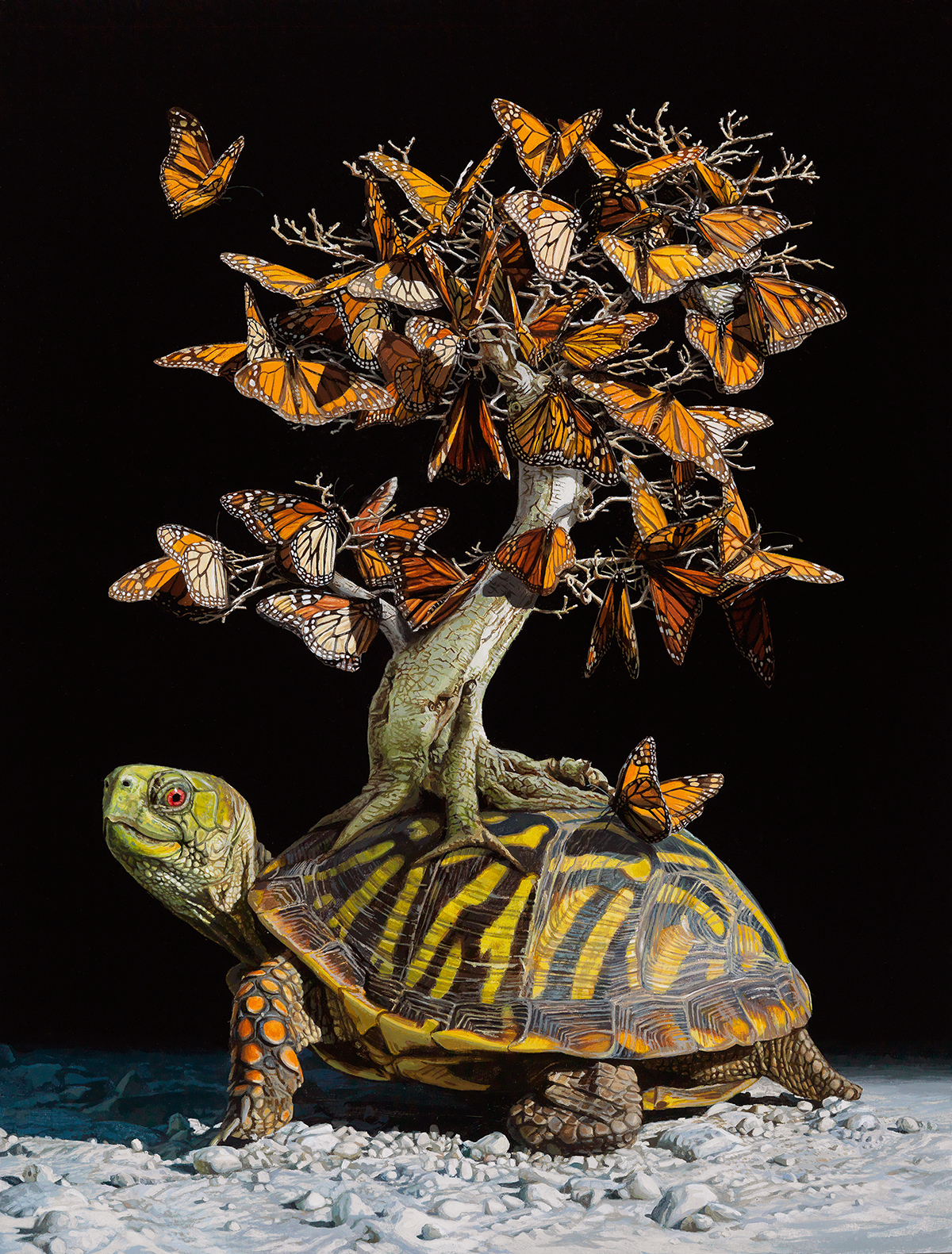 Portland, Oregon-based artist Lisa Ericson blends her hyperreallist painting style with a vivid imagination, resulting in fantastical combinations of plants and animals. Ericson tends to focus on one specific flora/fauna combination at a time, like hybrid mouserflies or coral fish. Her most recent series, Mobile Habitats, highlights turtles that support small ecosystems on their shells. From mossy knolls surrounded by fireflies to gnarled trees leafed with monarchs, each turtle-world evokes a specific time and place.

Ericson chronicles her work on Instagram, where she shares, “these pieces are all about turtles and what they can carry on those amazing half-a-globe shells, and about things that need saving.”

The acrylic-on-panel paintings are featured in her solo show, currently on view at Antler Gallery. All of the originals have already sold, but the gallery is offering a limited edition of 50 full-sized, signed and numbered prints. 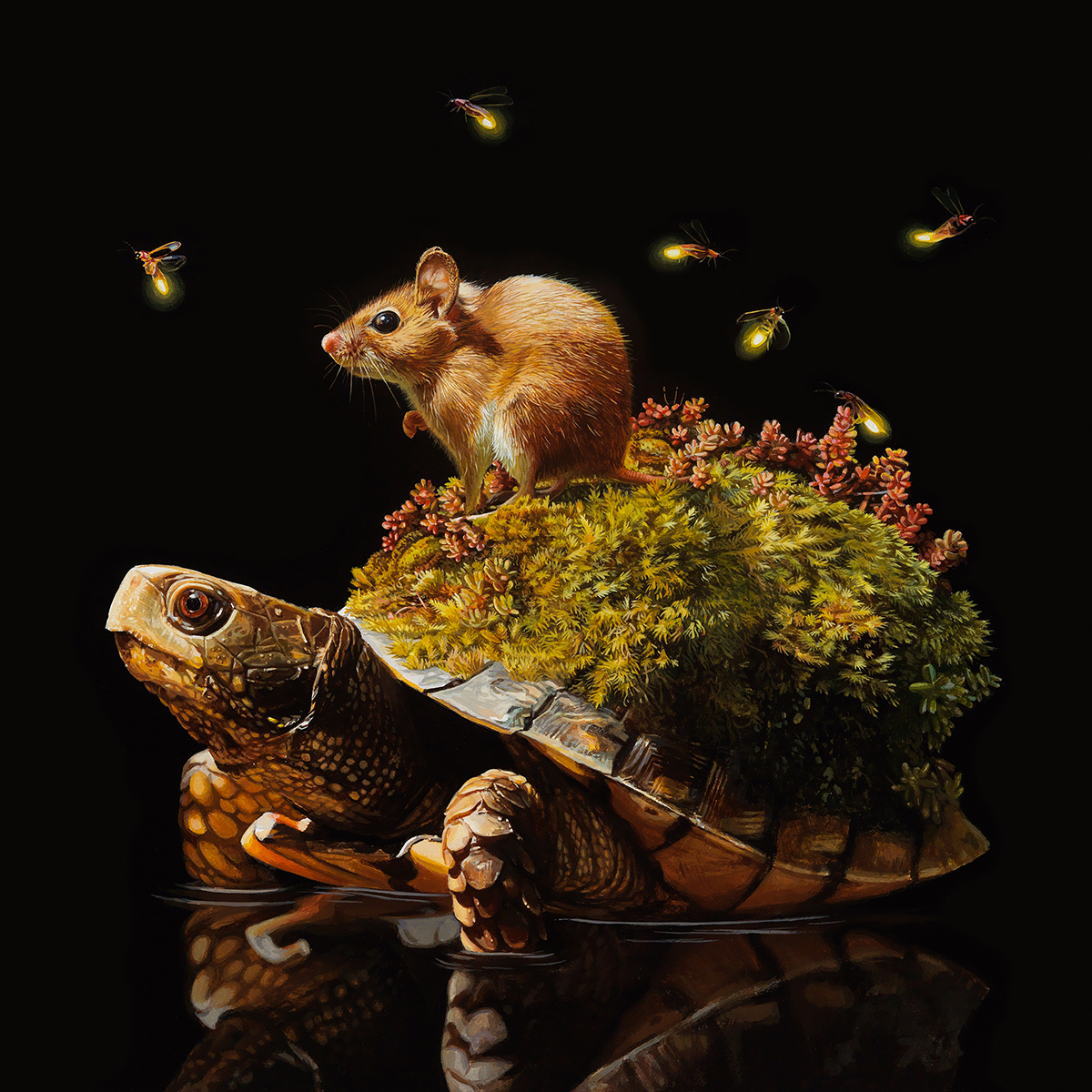 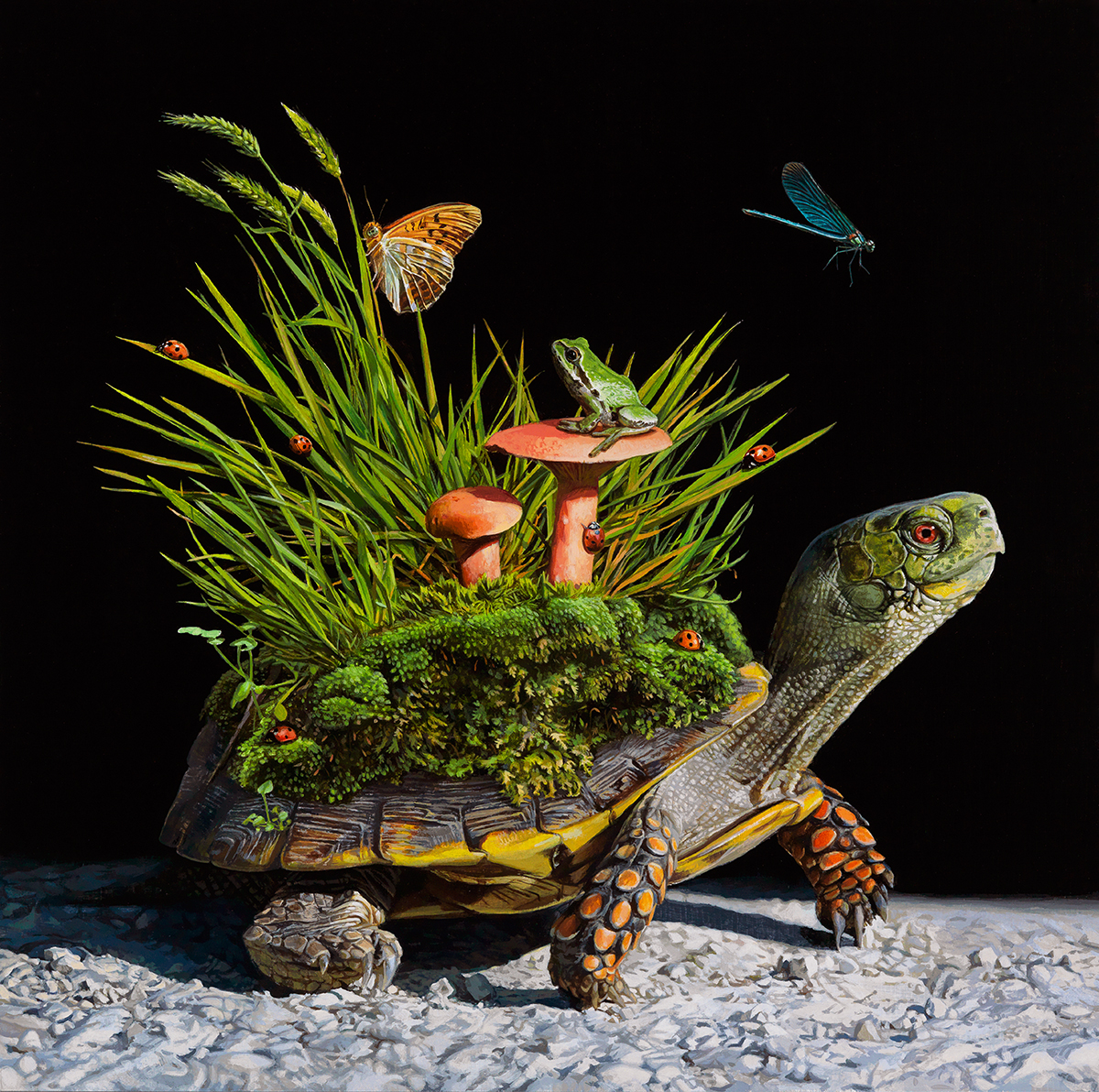 No, this isn’t a clip from the latest Miyazaki anime, this is the first sighting of a real fluorescent turtle.

Marine biologist David Gruber of City University of New York, was recently in the Solomon Islands to film a variety of biofluorescent fish and coral, when suddenly a completely unexpected sight burst into the frame: a glowing yellow and red sea turtle. The creature is a critically endangered hawksbill sea turtle, and until this sighting last July, the phenomenon had never been documented in turtles, let alone any other reptile.

Biofluorescence is the ability for an organism to reflect blue light and re-emit it as a different color, not to be confused with bioluminescence, where organisms produce their own light.

Many undersea creatures like coral, sharks, and some shrimp have shown the ability to show single green, red, or orange colors under the right lighting conditions, but according to National Geographic, no organisms have shown the ability to emit two distinct colors like the hawksbill. As seen in the video, the coloring appears not only in mottled patterns on the turtle’s shell, but even extends within the cracks of its head and feet. Gruber mentions this could be a mixture of both glowing red glowing algae attached to the turtle, but the yellow fluorescence is undoubtedly part of the animal.

Watch the video above to see the moment of discovery and learn more on Nat Geo. Apparently if you’re a thirsty butterfly, one option available to you is a refreshing sip of turtle tears. No, this isn’t a staged photo masquerading as science, it’s an unusual behavior known as lachryphagy (tear drinking), and is one of several ways butterflies obtain moisture and nutrients. Captured here by Ama la Vida TV, this photo shows two Dryas iulia drinking tears from the eyes of a few turtles. The photo won the 2014 Wikimedia Picture of the Year. (via Laughing Squid, Twisted Sifter)