In this brief video, artist Garip Ay creates an interpretation of Van Gogh’s ‘Starry Night’ painting using a paper marbling technique—or more specifically the Turkish method called ebru. Marbling involves the careful process of floating colors on the surface of water or a slightly more viscous solution called size, before transferring the design or pattern to a special sheet of paper in a dramatic flourish. If you liked this, here’s another video from the 1970s that demonstrates even more elaborate marbling techniques. (via Metafilter) Moving the art viewing experience from a linear surface to a three-dimensional environment, the Art Institute of Chicago is launching an interactive experience alongside their latest exhibition—entry to a full-size replica of Van Gogh’s painting The Bedroom. The room, available on AirBnB starting today, includes all the details of the original painting, arranged in haphazard alignment to imitate the original room.

The installation was built to celebrate the exhibition “Van Gogh’s Bedrooms,” a show which centers around three paintings of his domestic space he created from 1888 to 1889. The exhibition also serves as the first time the paintings will exist within the same space in North America. The first of the three paintings was produced shortly after moving into his “Yellow House” in Arles, France, yet suffered water damage soon after its completion. Van Gogh painted two other versions of the paintings to preserve the composition, one while at an asylum in Saint-Rémy in 1889 and the other as a present for his mother and sister.

Visitors will experience an immersive journey back to Van Gogh’s Yellow House, which is located outside of the museum’s campus in Chicago’s neighborhood of River North. The bedroom runs for just $10 a night and is part of a larger apartment. Dates will be released through the posting monthly and fill up quickly.

“Van Gogh’s Bedrooms” features approximately 36 works by the artist and will run through May 10, 2016. Make sure to keep updated on new listings for Van Gogh’s bedroom on the Art Institute of Chicago’s Facebook and Instagram page here. Self-taught embroidery artist Lauren Spark was asked by her mother to create an embroidery of Van Gogh’s Starry Night. Over the next month, Spark spent almost 60 hours working on the piece, using the Google Cultural Institute’s website to explore extremely high resolution views of the iconic painting to better mimic the strokes of paint, stitch by stitch (double-click the painting on Google’s site, the level of detail is incredible). The final piece is a surprisingly faithful interpretation, full of motion and color much like the original. 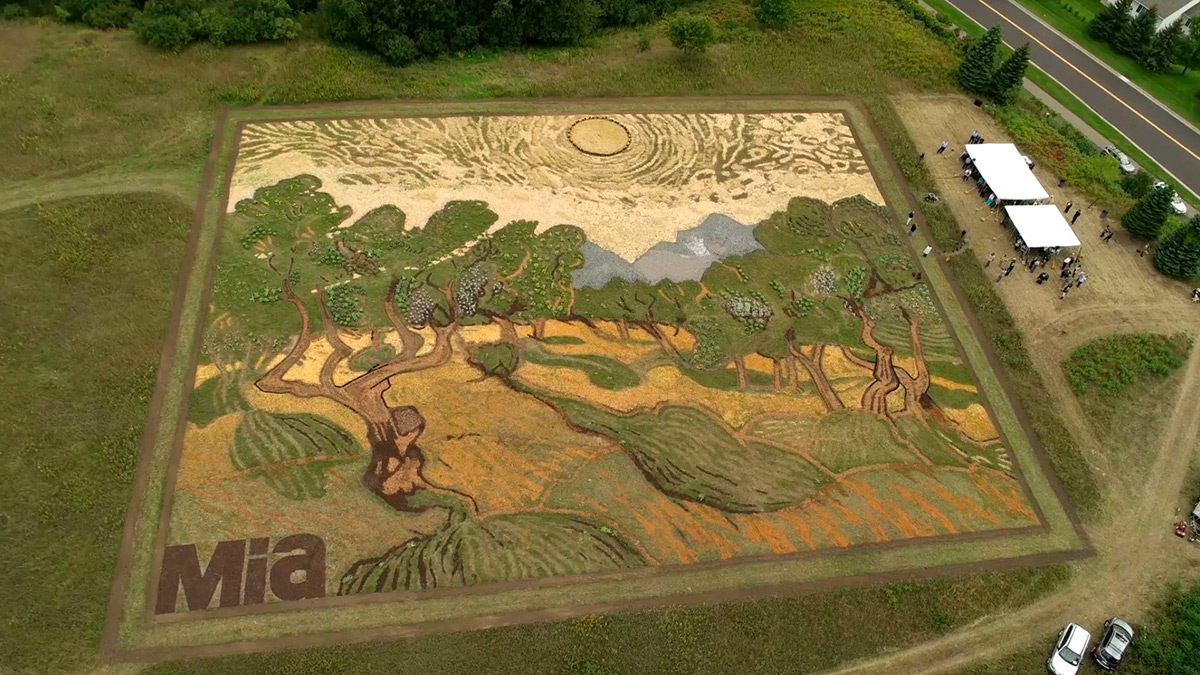 We’ve seen a number of interesting projects lately that attempt to bring art from inside museums into the outdoors. Artist Stan Herd has been doing just that for years by using fields as his canvas for both original compositions and interpretations of historical art. His latest work is a monumental 1.2-acre interpretation of Van Gogh’s 1889 Painting “Olive Trees” planted in Minneapolis. The piece was commissioned by the Minneapolis Institute of Art and involved weeks of mowing, digging, planting, and earthscaping to create the piece viewable from the air near the Minneapolis airport. If you happen to see the piece when flying into the city, you can head to the museum to see the real thing.

Herd’s first outdoor land art piece (he refers to them as “earthworks”) was an ambitions 160-acre portrait of Kiowa Indian chief Satanta, that he physically carved into a Kansas prairie in 1981. He’s since created dozens of works around the world, and notably inspired Japanese artists in Inakadate province north of Tokyo to plant a series of incredible rice paddy artworks.

The Van Gogh field will be on view through the fall in Minneapolis, after which Herd plans to mow it down in concentric circles similar to the Dutch artists’s iconic painting style. You can read more about the piece in the StarTribune. (thnx, Randy!) Another year, another Corso Zundert (previously), the legendary parade of giant floats adored with thousands of dahlia flowers that twist through the narrow streets of Zundert, Netherlands. This year 19 teams took inspiration from the work of Vincent van Gogh who was born in Zundert 162 years ago. The towering floats borrow colors, motifs, and imagery from van Gogh’s painting including several interpretations of the artist’s self-portraits.

Started in 1936, the parade celebrates the region’s reputation as a global supplier of dahlia flowers, an area now covering 33 hectares (81 acres) of 600,000 dahlia bulbs in fifty different species. The first Corso Zundert parades were modest in size featuring horse-drawn carts or bicycles covered in flowers, but the event has since grown dramatically. The floats now merge more ambitious aspects of contemporary/urban art with traditional parade floats as part of a friendly annual competition. You can see plenty more photos over on BN DeStem. Photos by Photo by Werner Pellis