Cultivated for centuries in Japan, bonsai originated in China at least 4,000 years ago, treasured as symbols of balance and harmony and admired for their aesthetic beauty. Vitor Schietti’s ongoing project Impermanent Sculptures continues to tap into the strength of the trees in a photographic series of illuminated specimens.

Long-exposure shots capture bright streams from sparklers that contrast against deep, dark backgrounds and speak to the relationship between the immediacy of light, the ephemerality of the photograph, and the enduring nature of the lifeforms. “The small-scale representation of their grown, natural counterparts allow my strokes of sparkles to reach further through the trees’ shapes,” Schietti explains. Bonsai provide an opportunity to illuminate what he describes as the “soul, the source of life,” of these living forms, sharing that the process of creating and tending to one of the miniature botanical specimens reveals a unique human connection to nature. 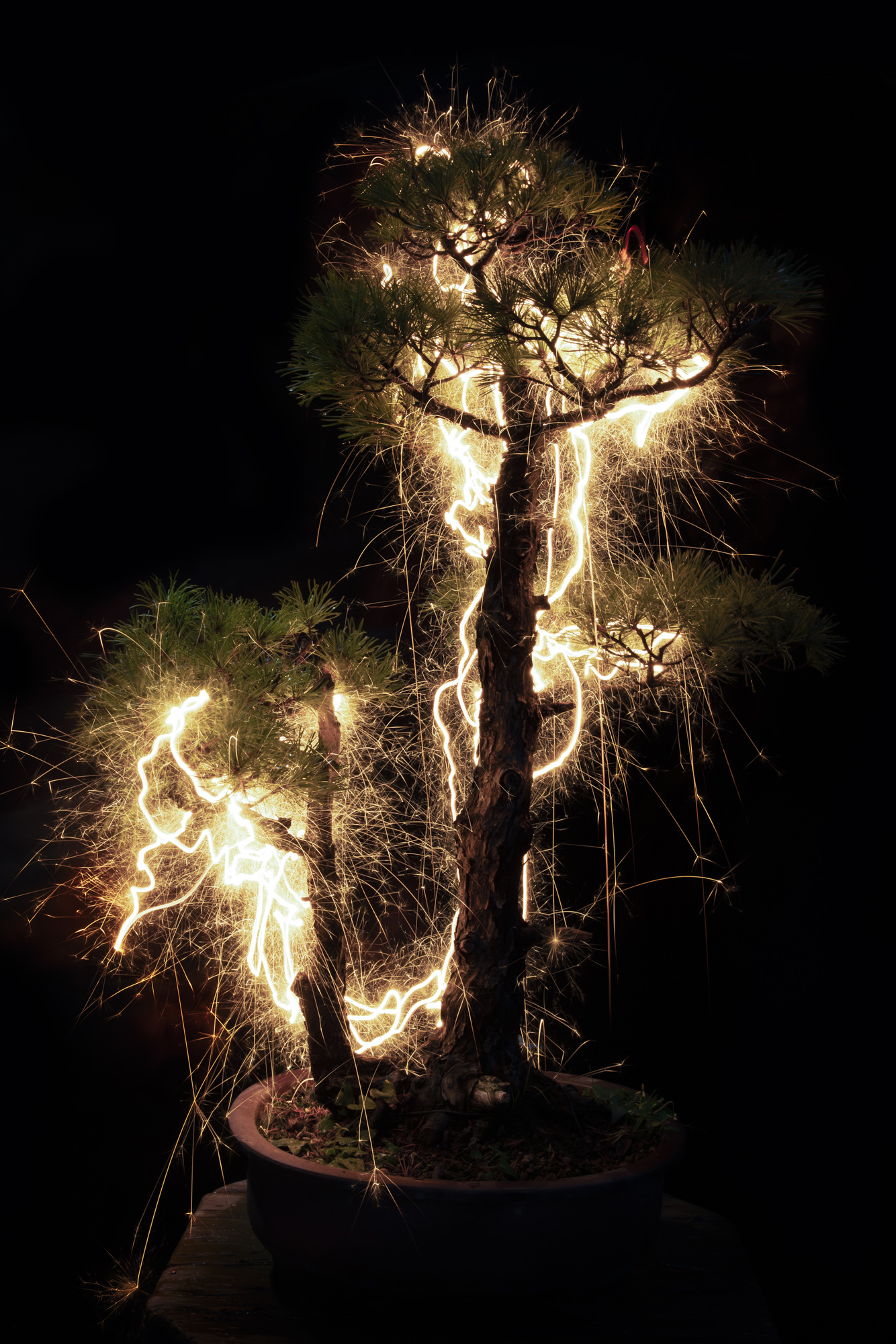 In Vitor Schietti’s Impermanent Sculptures, thick treetops and branches are swollen with light that appears to drip down in incandescent rays. Each photograph frames the nighttime scenes in a dreamy, energetic manner as the glowing beams both outline and obscure the existing landscapes. Schietti shot the pieces shown here in February and March of 2021 around his hometown, Brasília, but the ongoing series first was developed in 2015.

Although some of the long-exposure photographs are taken in a single shot, many are composites created from various light paintings. He explains:

Apart from this process and color and contrast adjustments, the result is conceived entirely from real action with fireworks, a performance that shifts between spontaneity and control… To paint with light in a three-dimensional space is to bring one’s thoughts from unconscious realms into existence, only visible as presented through long-exposure photography.

Schietti sees the luminous series as a celebration of the Brazilian city, which he describes as a tree-filled oasis of birds and cicadas that’s “often integrated with the genius architecture of Oscar Niemeyer…Appreciating their hidden expressions, or imagining the life force that pulsates and emanates from them maybe a little less ordinary, so here (the) images play an important role: inspire and foster imagination.”

Check out the catalog of available prints on Schietti’s site, and head to Instagram for more of his photographs featuring Brazil’s lush landscapes and natural life. 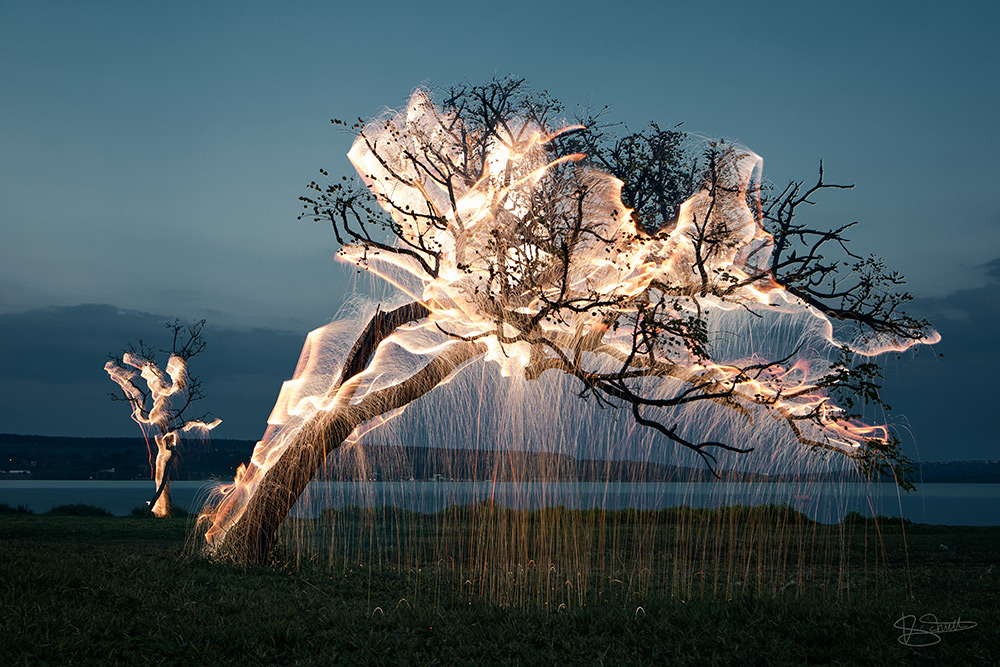 For his series of experimental photography titled Impermanent Sculptures, photographer Vitor Schietti worked with fireworks and long-exposure photography to illuminate the branches and stems of trees in his native Brazil. The photos are a mixture of in-camera light painting, and a bit of post-processing that can combine up to 12 shots into a final image. He shares with us about the project:

The series is the result of several years of research on long exposure photography, and the usage of ND filters was vital to find a perfect balance between the fading twilight and the brightness of the fireworks. Only a few attempts were allowed per day, since the time frame during which this balance is possible is very narrow (30 to 50 minutes). The Brazilian central plateau, in a kind of savanna called “Cerrado” was the scenery for most of these experimentations. The margins of the lake Paranoa, the streets and some iconic monuments from Brasilia were also locations for some of the light paintings. It’s important to say the series is an ongoing process, and more will follow in the coming year or so.

You can see much more of Schietti’s photography on Flickr. (via This Isn’t Happiness) 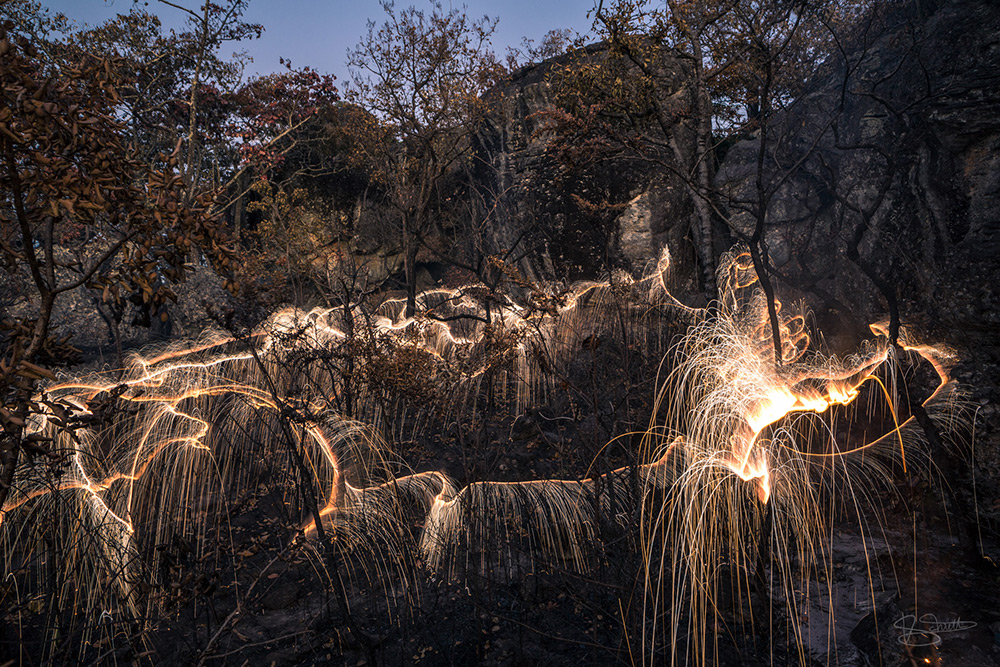 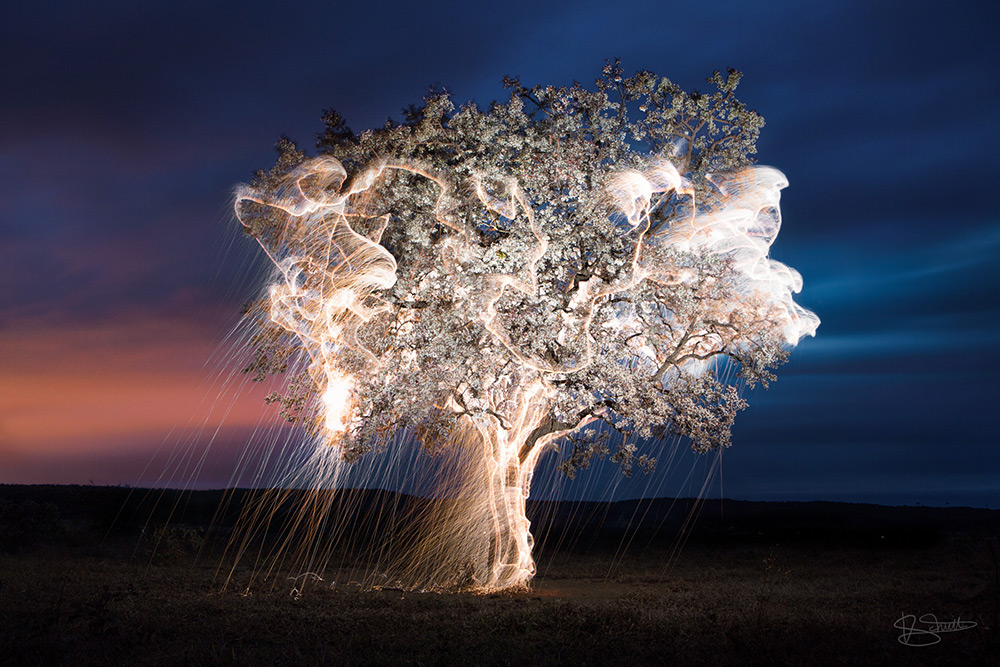