Speckled with Light, Glowing Glass Sculptures React to Viewers with Shifts in Brightness 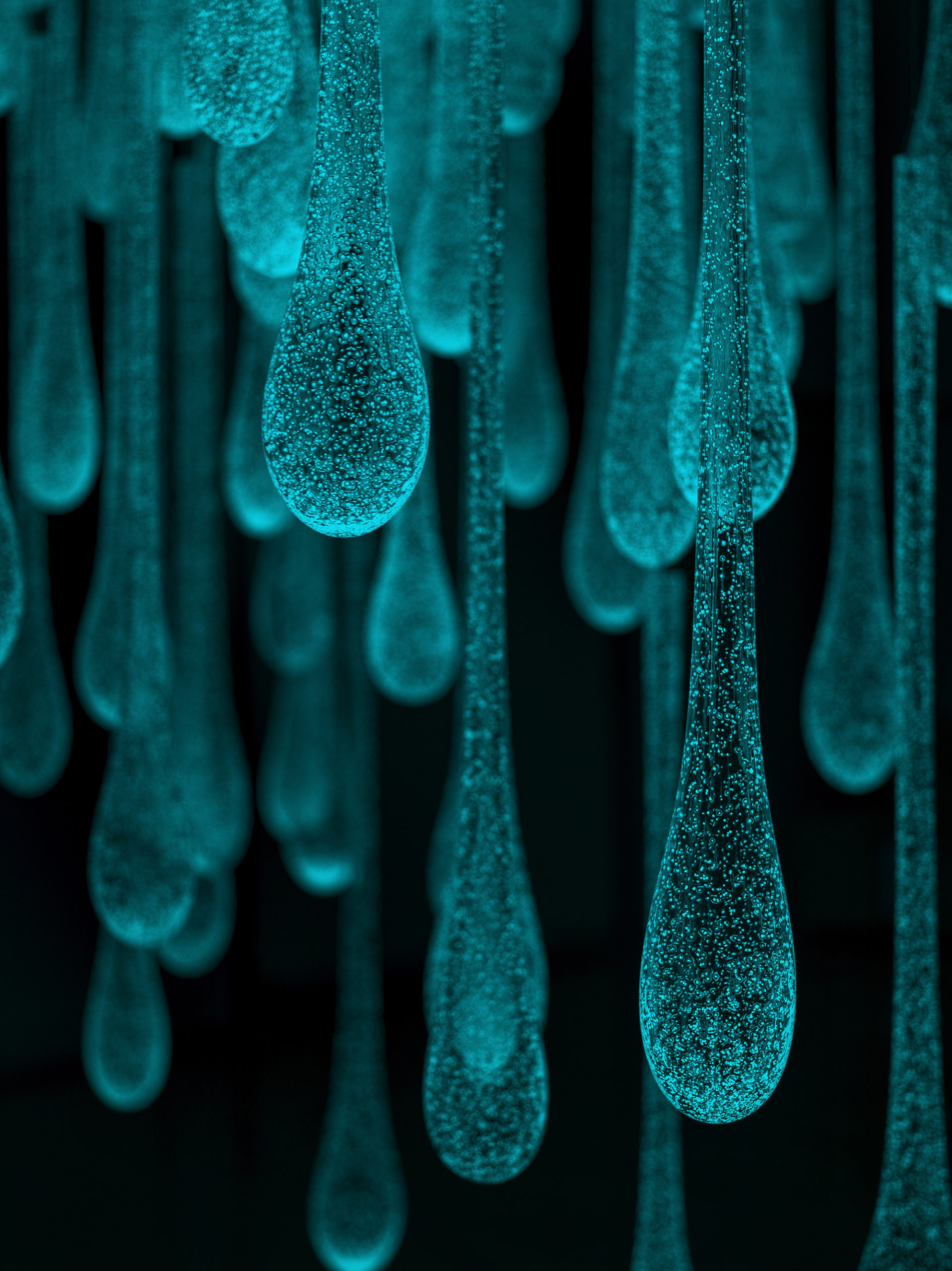 Approach the delicate glass artworks by Rui Sasaki, and witness the unpredictable patterns of the weather through a subtle glow of blue light. The Japanese artist’s experiential body of work translates varying forecasts into speckled sculptures that radiate once encountered, an intimate process that Sasaki describes as a way to “visualize subtle sunshine, record today’s weather, and transfer it from here to there/from there to here.”

At their brightest, the phosphorescent crystals are tinged green before fading to blue. “Visitors will doubtless be surprised to find that even if they cannot see anything on first entering the gallery, stay long enough and their eyes will become accustomed to the dark, and the elements of the work will gradually become visible,” Sasaki writes. Because each encounter sparks a unique reaction in the embedded lights, no two experiences will be the same. She explains:

The phosphorescent glass used stores light of a wavelength close to that of sunlight, with this stored light then glowing in the dark. That is to say, one is now seeing light accumulated in the past. If a viewer remains in the gallery for an extended period, the next viewer will see the work glowing weakly in the darkness. With longer viewing time, the light of the phosphorescent glass fades, moment by moment, until finally the gallery is plunged into darkness. This might occur a minute later, or a day later, depending on viewer movements.

Many of the sculptures evoke organic elements in material, concept, and sometimes form, whether shaped into swollen raindrops or a sun-like orb. Others, though, are depicted through domestic scenes with dinnerware or a suspended chandelier, a juxtaposition that relates to Sasaki’s feeling she had lost her sense of home after moving to the U.S. for a few years. Now living in Kanazawa, the artist is using the weather and surrounding environment as a way “to recover from the reverse culture shock and rediscover my intimacy towards my home Japan little-by-little and day-by-day.”

Sasaki’s sculptures are part of multiple group shows, including one at Toyama Prefectural Museum of Art & Design through April 4, another at Art Museum Riga Bourse that will re-open April 6, and an upcoming spring exhibition at Tainan Art Museum in Taiwan. She also has a solo exhibition at Tokyo’s Gallery DiEGO Omotesando slated for May. Watch this interview and studio visit for a glimpse into her process, and follow where her work is headed next on Instagram. Mike Olbinski (previously) not only chases storms, he also brings his camera equipment with him. The Phoenix, Arizona-based photographer—who shoots weddings between storms—compiled two seasons of wild weather footage from around the U.S. The result isVorticity 2, a time-lapse of Olbinski’s top finds from spring 2018 and 2019. For seven and a half minutes massive clouds tear through open skies across plains and mountain ranges, rainbows brighten the calm after the storms, and sheets of rain obliterate horizon lines.

Olbinski incorporated music by Luke Atencio for Vorticity 2’s soundtrack. Enjoy the wild ride of Olbinski’s chases from the safe vantage point of your laptop on YouTube, and peruse fine art prints on his website.  (via Twisted Sifter) Photographer Camille Seaman travels the world capturing fleeting moments of power in diverse landscapes. From melting icebergs at both poles to stormy states across America, Seaman showcases the beauty, terror, and fragility of nature in her digital and film images. Seaman began storm-chasing after her daughter, eight years old at the time, suggested it might be of interest while the two were watching the Storm Chasers TV show. Her newest book,The Big Cloud, focuses on supercell storms around the U.S. It includes a forward by New Yorker science writer Alan Burdick, and includes behind-the-scenes shots and written reflections from Seaman about the experience of being a storm chaser.

“Sometimes as we pulled into a local fuel station, we would be met with superstitious folks who were not glad to see us; some of those people had lost their homes or loved ones in storms,” Seaman writes in the preface. “It was important to remember that these people lived here year after year, never knowing if this would be the day when a tornado might come through their town. It taught me great empathy and compassion. It was important that our chasing storms not become some sort of disaster tourism… I always wanted my images to speak to the duality of all things—to speak to the essential truth that there can be beauty in something terrible and vice versa, that there is no creation without destruction.”

In addition to authoring three books, Seaman is also a TED Senior Fellow, and has published works in National Geographic, The New York Times, and Outside Magazine. You can find The Big Cloud, published by Princeton Architectural Press, on Amazon. Follow the photographer’s travels on Instagram and Twitter.