Moscow-based artist Nastasya Shuljak transforms packs of wool into sculptures of small animals and other whimsical creatures. Plants sprout from the heads of smiling trees and other natural spirits. Polar bears, foxes, hares, and other critters stare through inquisitive eyes applied to their tiny woolen faces. Shuljak’s toys are an exercise in the flexibility of the material and also a way to bring joy to all who meet them.

Shuljak, a former theater artist and art teacher, tells Colossal that the practice of making creatures began when friends gifted her some wool. With that first bag she made a bear and a hare, and the menagerie has been growing ever since. “I saw children’s sonorous happiness in an adult man holding in his hands what I did,” says Shuljak. “Until now, it touches me, causes surprise and peace.” Commenting on the purpose of the figures, she added that her animals “do not aspire to the exhibition hall, do not claim to be art. These are just small lumps of joy, carefree second smiles.”

Shuljak teaches classes in Moscow on how to create the toys and also sells them via social media. For more information on upcoming workshops and to meet more of these adorable wool creatures, follow Shuljak on Instagram. A new stop-motion film chronicles the excitement, messiness, and tragedy of love. Directed by BAFTA-winning animation director Anushka Naanayakkara, “A Love Story” depicts two characters who are made of wool, lace, and other fabric remnants as they navigate an entangled relationship. At the beginning, small pieces of string from each face weave into the other, altering their compositions with every interaction to demonstrate the relationship’s effects. Soon the two become so entwined that their faces exhibit completely different patterns and colors. Lastly, an ambiguous dark force appears to envelope the pair and ultimately severs their tangled bonds.

Although the film features love’s tribulations, the director said she wanted to “bring comfort to audiences who have been through a similar experience” in an interview with Short of the Week. The short film was produced by the National Film and Television School in the UK. More of Naanayakkara’s heartfelt projects can be found on Vimeo. (via Short of the Week)

We’ve all heard that we should incorporate more fiber into our diets. But did our doctors mean… wool? Andrea Love is on the front lines of nutritionally dense animation with her fiber-based short films centered around breakfast foods. Minuscule pots of coffee pour into green mugs, spirals of yarn turn from black to red as stove-top heating elements, and succulent lemons squirt out felted juice when squeezed. The Washington-based artist works from her basement studio crafting both client-commissioned and personal work. Watch more of Love’s felt-fueled animations on Instagram, where she generously shares behind-the-scenes knowledge in responses to questions from her 100,000+ followers. (via Laughing Squid) We don’t recommend getting near Kate Jenkins’s breakfast spread before you’ve had your morning coffee, or you might find yourself biting down on a bagel full of yarn. The British crochet artist (previously) creates fiber-based foods that bear a striking resemblance to their edible inspirations. Jenkins has a particular affinity for baked goods: her recent spreads include bagels and lox, whole grain bread loaves, and individual fruit tarts. The artist creates every last detail down to tiny caper berries, thinly sliced red onions, and kiwi and poppy seeds made from black beads.

Jenkins learned to knit and crochet as a child in Wales, and shares in an artist statement that she has always been fascinated and inspired by everyday objects and experiences. In addition to her culinary crochets, Jenkins trained and worked for many years as a knitwear designer in the fashion world. Keep up with Jenkins’s freshest bakes on Instagram, and purchase artwork in her online store.

For those in NYC who love textile-based delectables, we also recommend Lucy Sparrow’s felt food “deli” pop-up at Rockefeller Center, open through October 20, 2019. 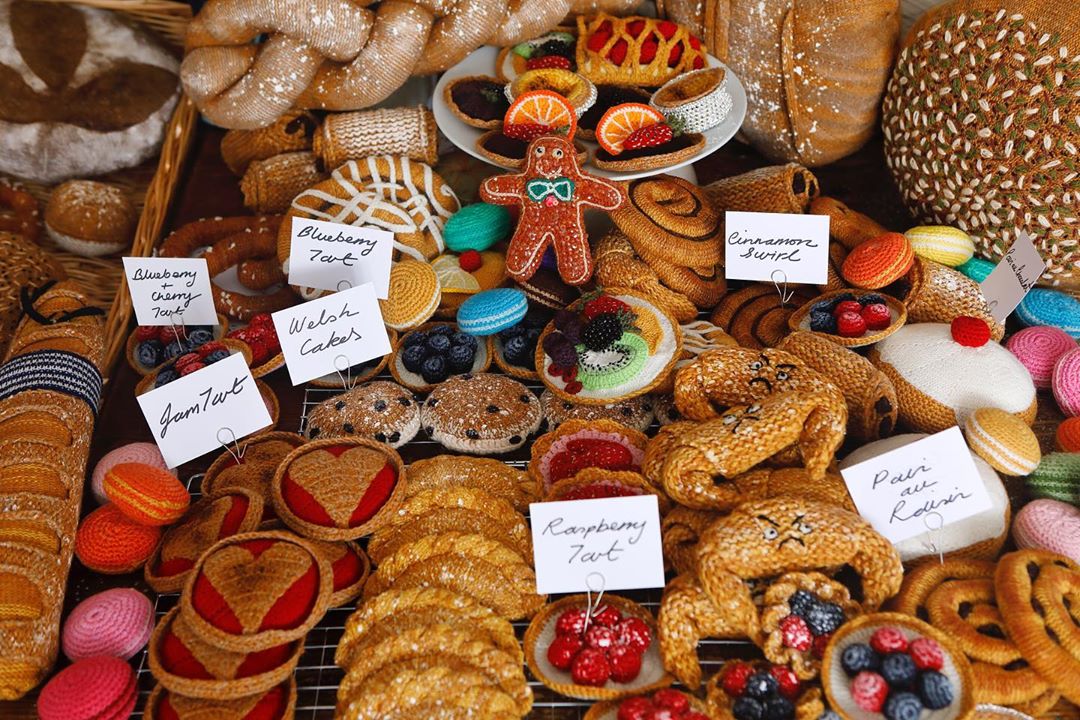 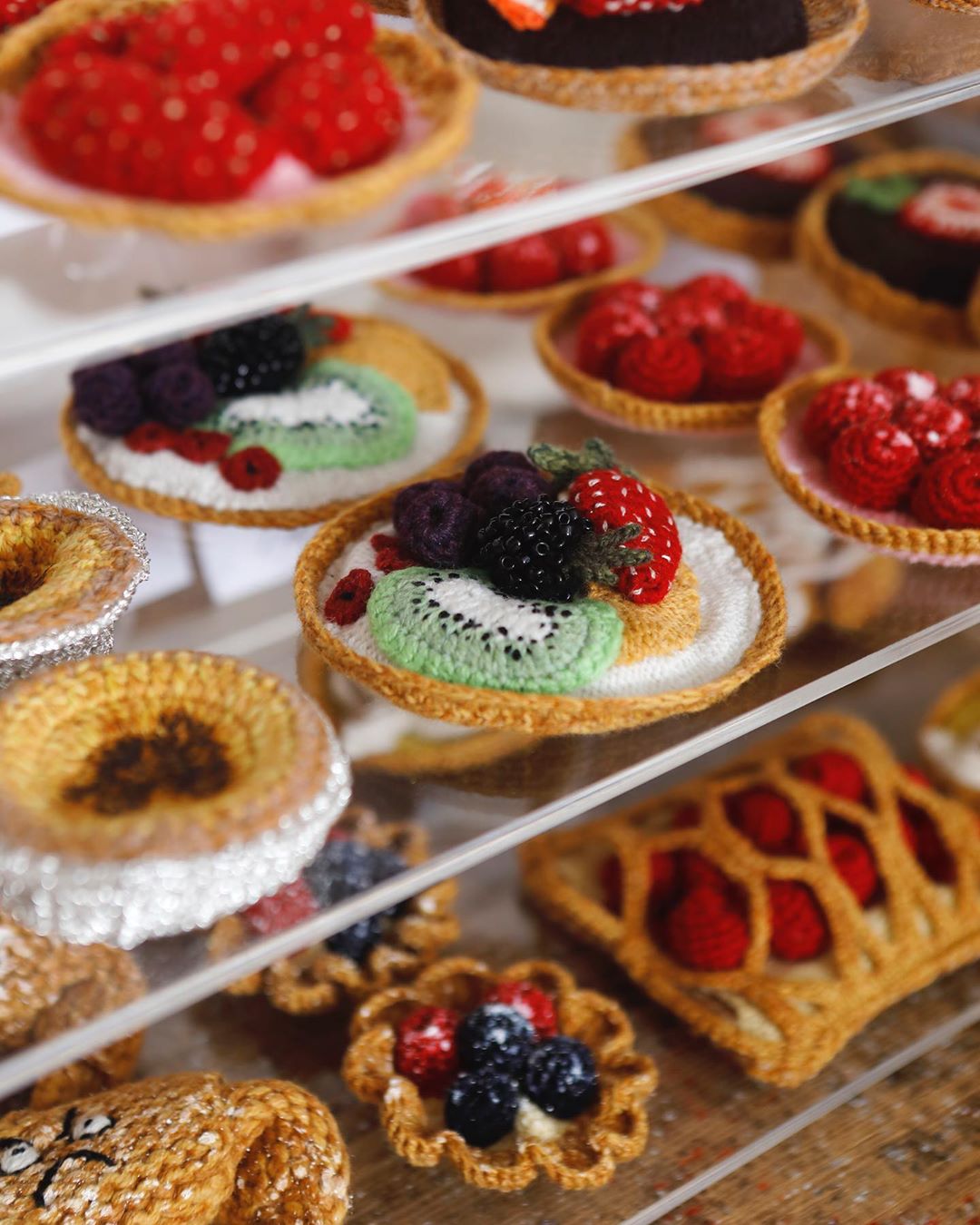 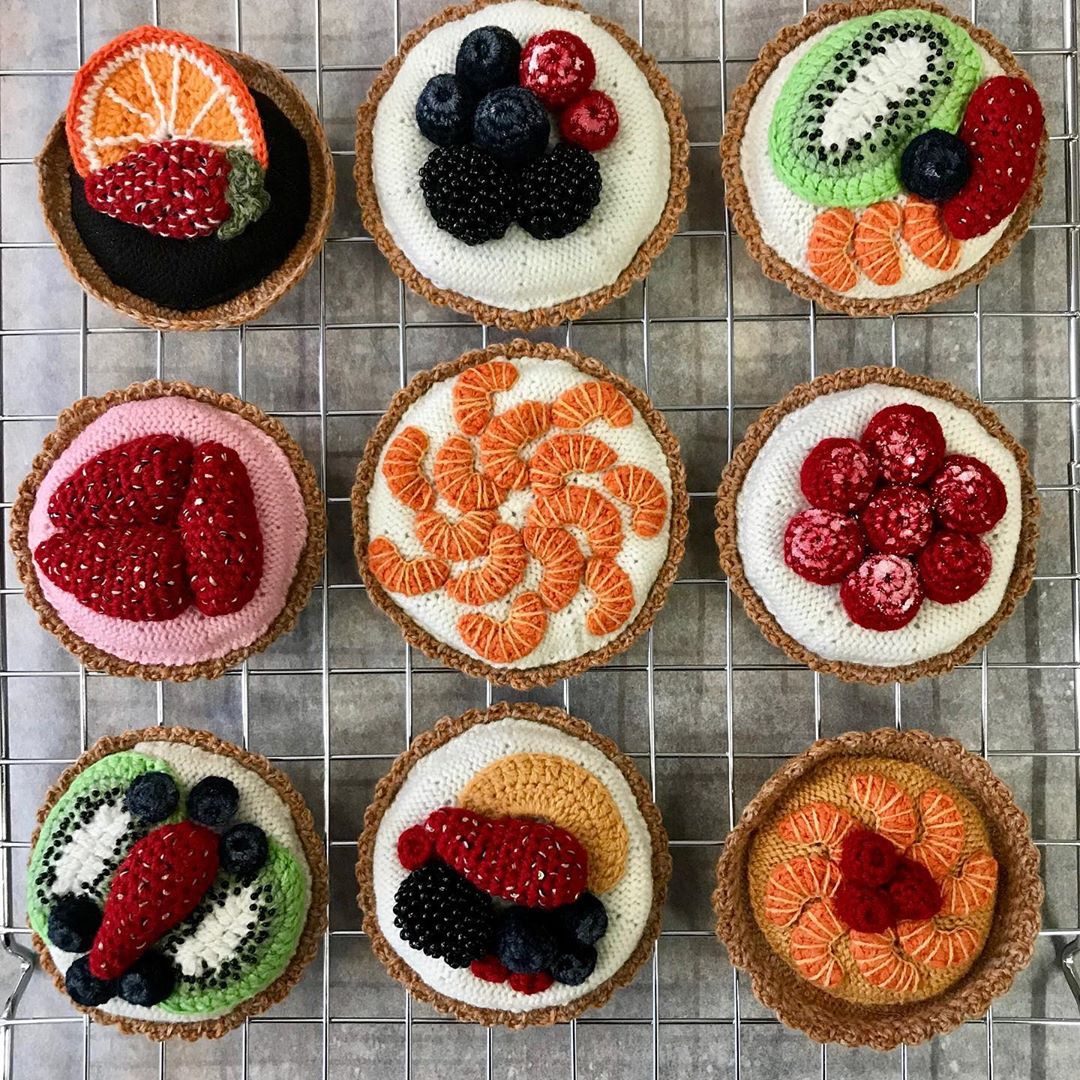 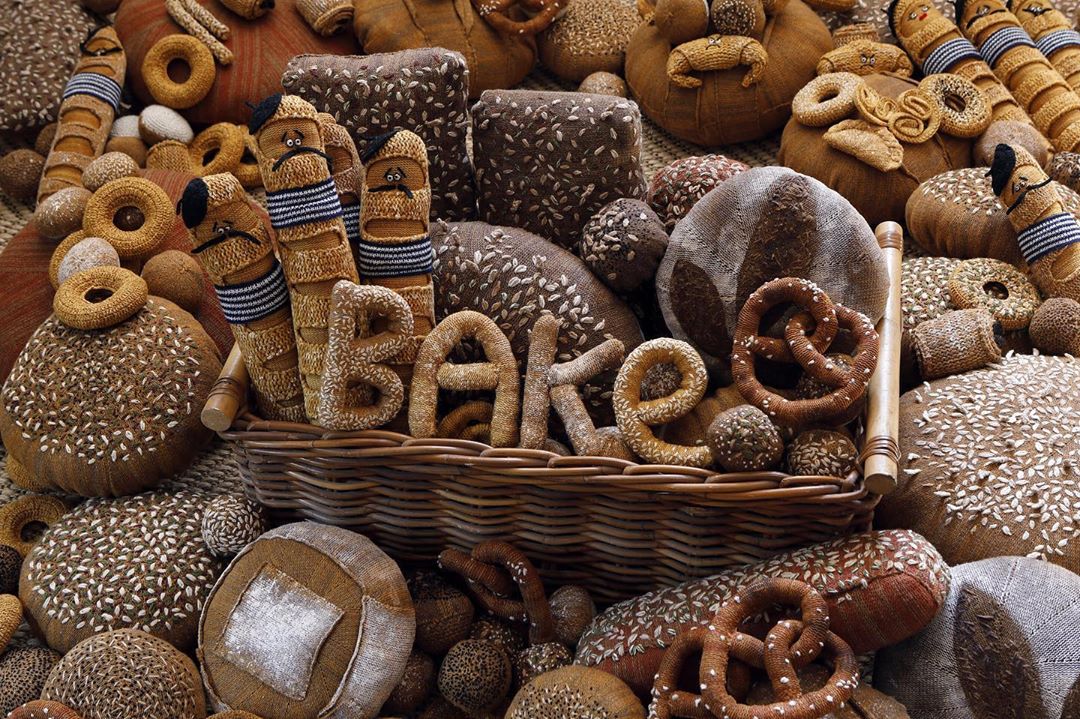 Li Ziqi (previously) presents pastoral glimpses into daily life on her farm in the countryside of China through her Youtube channel. She records common projects and necessities with precision and care, often focusing on the tasks needed to created a multi-course traditional meal or demonstrating the ways she prepares for the region’s harsh winters. In a video from earlier this year, Li walks her audience through the steps of knitting and dying a floor-length purple cloak with wool sourced from a neighboring farm. The five-minute film follows her journey across the snow-strewn mountains, watches as she inspects and brushes out the gathered wool, and features cameos by a few puppies and a very tiny lamb. You can view more snippets from her life on Facebook and Youtube. (via swissmiss) By day, Trevor Smith is a local council worker in Victoria, Australia. After hours, Smith creates replicas of elaborate meals and household appliances in crocheted wool. Cheese platters, baked hams, toasters, and hair dryers are carefully constructed using foam armatures underneath the woolen exteriors. Smith has had a lifelong interest in crafts, and shared with The Design Files, “my mother was a talented craftswoman and I was always shadowing her, wanting to be doing what she was doing.” Smith earned a degree in Visual Arts as a sculpture major and also has been a curator of public art collections for the last 30 years. His crocheted artwork is available through Michael Reid gallery, and Smith shares updates on Facebook. If you enjoy the artist’s work, also check out Lucy Sparrow and Kate Jenkins for more fiber interpretations of food. (via The Design Files)