One of the most ubiquitous sights in any city around the world is the humble park bench: a meeting spot for friends, a place to grab lunch or perhaps a smoke, and maybe a quick snooze. Usually such mundane activities fade easily into the background of our busy lives and we would hardly stop to notice the goings on around a small public meeting spot, but for Ukrainian photographer Yevgeniy Kotenko, one such bench has turned into rich body of photography spanning over a decade titled On the Bench. Starting in 2007, Kotenko began to shoot a local park bench outside the window of his parent’s fourth-floor kitchen window in Kiev. Sandwiched between a children’s playground and a walking path, the area proved to be a hotspot of colorful characters. Alcoholics, families, and lovers all congregate on the exact same bench during different times of the day, and when observed with Kotenko’s patient eye an almost Shakespearean drama begins to emerge over a decade of photos.

“I wasn’t thinking of making a series or a project,” shares Kotenko with Colossal through a translator. “I didn’t select any particular time frame or set of situations to capture. Not until 2012 did my friends tell me that I should put together an exhibition of these photos.”

The stark contrast in situations—from a picnic table to an impromtu emergency room—results in a fascinating documentary in the lives of local residents and passersby. “I never invested the photos with any particular intention or idea of what I wanted my audience to see,” Kotenko adds. “They will see what they want to see. These photographs are more like a documentary.”

You can see dozens more photos from the On the Bench series on Facebook, and you can follow Kotenko on Instagram. Thank you to Jen Carroll for contributing to this piece. (via Radio Free Europe/Radio Liberty) 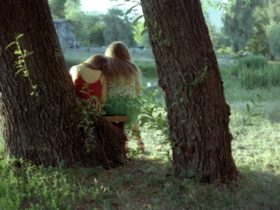