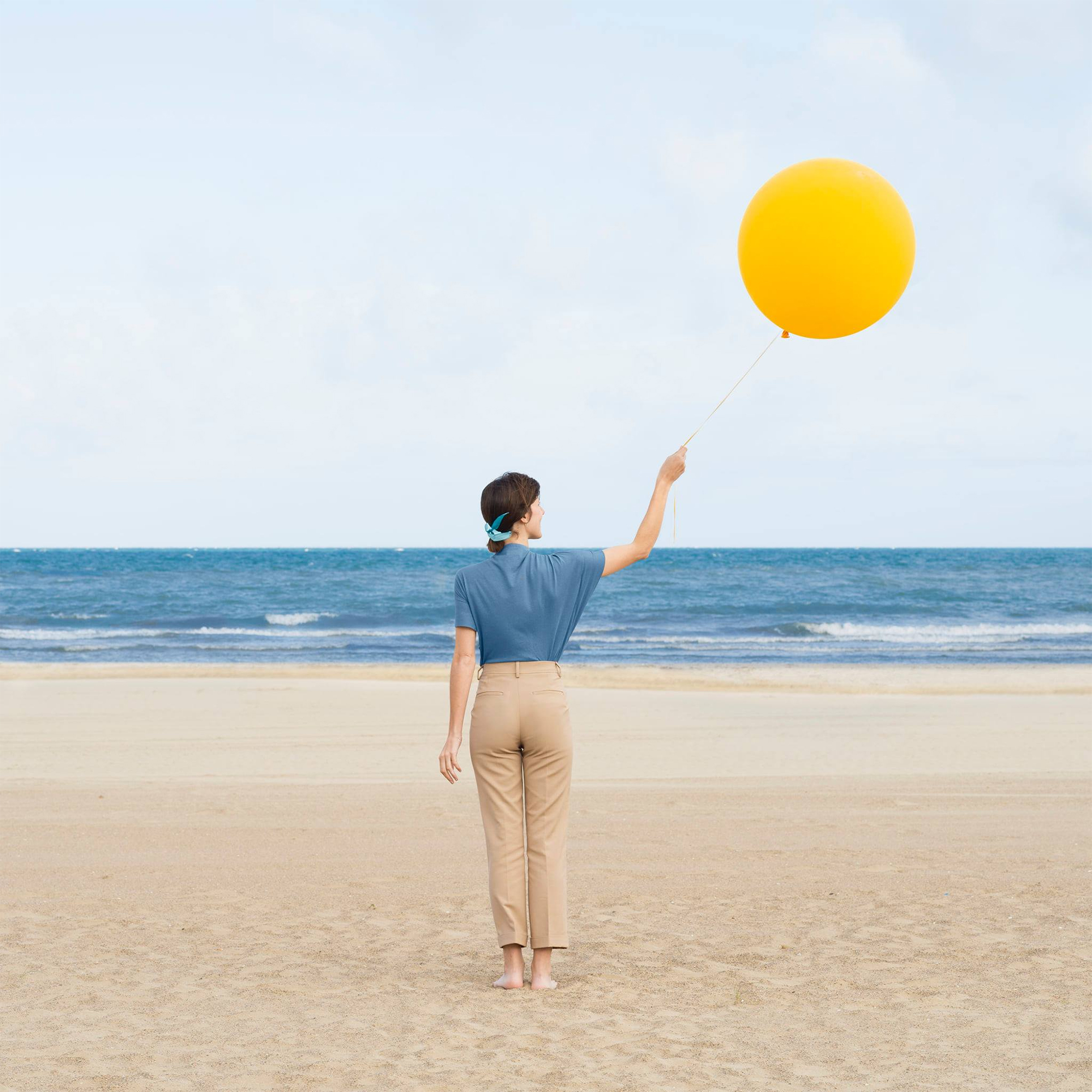 All images © Daniel Rueda and Anna Devís, shared with permission

Valencia-based duo Anna Devís and Daniel Rueda (previously) add a playful twist to mundane settings and architectural backdrops. Whether flaring a skirt into a wide, cheesy grin, posing to prop up a facade’s stripes, or gripping the tail of a balloon that looks like a tethered sun, their minimal compositions turn geometric elements and open spaces into theatrical sets ripe with humor and joy.

Devís tells Colossal that each narrative-driven image is the result of extensive planning that begins with an initial sketch, involves pairing a concept and location, and later constructing the props. They don’t use any photo-editing software, meaning that every shot is precisely composed on-site with natural lighting, a process she explains:

We carefully set the stage in real life using all sorts of everyday objects, colorful papers, matching outfits, and tons of natural light. At first glance, one would probably think that most of our images are not very difficult to capture because of their modest appearance. But, with the passing years, we’ve learned that achieving this level of simplicity is really, really complicated.

In the coming months, the duo plans to travel to various locales for photoshoots— “there are a lot of beautiful spaces where we’d love to tell a story, but we haven’t figured it out yet,” Devís says—and are in the process of working on a forthcoming book and a few exhibitions. You can find an extensive archive on both Devís’s and Rueda’s Instagrams, and buy prints on their site. Ben Denzer cultivates what could be the next trend in sustainable fashion with a green redesign of the classic Hermés Birkin bag. The artist and designer whipped up these vegetable versions of the iconic, high-end accessory by arranging asparagus stalks, cucumber slices, and cabbage leaves into a trio you’d be more likely to find in the produce aisle than a luxury shop.

Denzer is known for his playful food pairings, including books bound with cheese slices and condiment packets and an entire account dedicated to matching his favorite reads with ice cream. Find more of his quirky designs on his site, and check out his Instagram for the apple and banana bags that didn’t make the cut. You also might enjoy Nicole McLaughlin’s edible attire. (via The Morning News) A cowgirl named Rose and her eccentric pals embark on a mission to find the man damaging their local environment in the clever and fervent short film “Spell of the West.” Created by Los Angeles-based Sam Lane during her third year at CalArts, the animation follows the group’s wayward journey through the roving hills and sentient forests as they search for the ax-wielding tyrant who’s chopping down trees and demolishing their cactus farm.

Simultaneously witty and sincere, “Spell of the West” is imbued with magical undertones and a message that there’s more to environmental destruction than the loss of ecosystems. Lane explains to Short of the Week:

Most scientific work falls short of capturing the emotional aspect of human/nature relationships. In order to protect our natural surroundings, it’s important to know the dry facts, but it’s also important to establish an emotional human connection. Narrative is a prime rhetorical tool, and I was interested in re-framing the environmental conversation with a deep respect and poetic appreciation for the natural world.

To watch more of Lane’s 2D animations, many of which she creates entirely on her own with the exception of voiceovers and sound design, check out her Vimeo and Instagram.