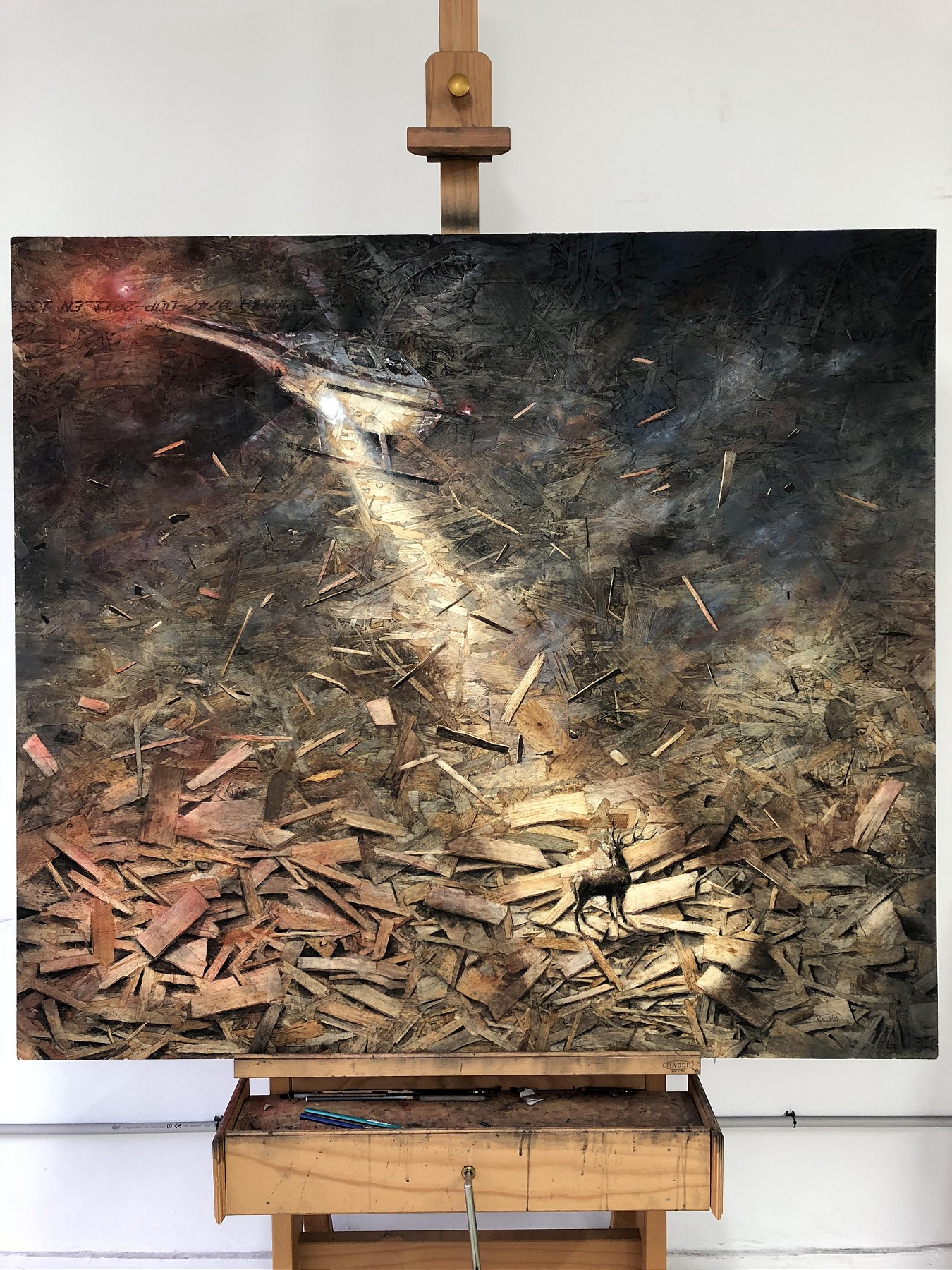 After taking a much-needed break over the summer following his successful presentation in Paris in June, Pejac is now back in his studio, developing new works for his U.S. debut in New York City and preparing a special limited edition that will be released toward the end of the year. Mixing his most recognizable techniques and mediums, he’s been sharing some of the alluring new pieces via his Instagram, including most recent drawings and works on pressed wood panels. The Spanish artist first introduced the captivating works on wooden chipboard from the Redemption series back in January 2017, and eventually had an entire showcase focused on these pieces back in September 2017 in Venice. Known for revisiting his ideas and concepts, he recently finished this poignant new piece titled Safari. Mixing some of the previously seen imagery, such as patrolling helicopters with a spotlight, or a lonely stag, Pejac combines these visuals into a dynamic image that depicts a wild animal caught in the open by an unknown authority. Using fastidious shading and light effects, he uses the unorthodox composite wood medium to create a powerful effect of objects flying around the animal as its surrounding crumble around it. Once again putting a focus on the careless and ignorant bearing of humans towards nature, the artist constructed a gripping image utilizing an original technique he developed. With similar thematic content, Pejac’s most recent solo exhibition on an old waterway barge on the Seine in Paris included three masterful large-scale drawings, along with other works on paper. Portraying a post-apocalyptic, surreal future, these meticulously rendered drawings mounted on thick frames were matched the quality of his paintings while depicting the hefty subject with a direct and delicate technique. Showing a lone character diving deep to retrieve a sinking lifebuoy ring in between plastic waste, or a helicopter removing a lighthouse over a desert, these images showcase Pejac’s poetic vision and his ability to pass a sharp and weighty message in the most poetic way. A great example of such narrative is his canvas Le Bateau Ivre (The drunken boat) from 2015, titled after a poem written by Arthur Rimbaud, describing the drifting and sinking of a boat lost at sea in a fragmented first-person narrative saturated with vivid imagery and symbolism. Making an analogy with poem’s verbal saturation, the image shows two boys finishing from a small boat drifting through a sea densely polluted with garbage. Originally exhibited at his 2016 London solo show “Law of the Weakest,” this troubling vision from only three years ago is repeatedly becoming an alarming reality around the globe. You can see Pejac’s works in progress and stay up to date on show and print release announcements by following him on Instagram.