Japanese artist Yasuhiro Suzuki long has wondered about what lies beneath the surface of Tokyo’s Sumida River, a question he’s symbolically remedied with a sleek vessel that unzips the middle of the waterway. Suzuki’s “Zip-Fastener Ship” mimics the ubiquitous closures as it separates the central river with a wake that splays out just like the teeth-lined tape.

Completed in 2004, the silver vessel grew out of an idea Suzuki had in 2002 after he watched a ship glide down the waterway while flying overhead. “The undertow of the boat, which travels back and forth between Azuma-bashi Bridge and Sakura-bashi Bridge, opened up the water like a zipper to connect the other side of the river,” he says. “(I hoped) that it would change the way we look at the city landscape.”

Suzuki began an annual launch on the Sumida in 2018 and plans to shift his focus to the water’s molecules in a future iteration, which you can follow on Instagram. (via Laughing Squid) 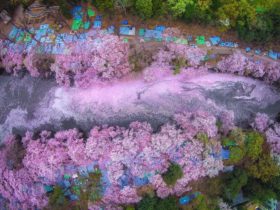