A recent University of Tampa graduate, activist artist Nneka Jones masterfully blends embroidery thread to stitch stunning portraits of young girls, women, and the occasional celebrity. Sometimes donning a fringed shirt that cascades from the canvas, the subjects wear somber faces and stare forward through the gaps of a bullseye or scope, symbols that serve a larger purpose.

By obscuring and literally marking the faces with targets, the Trinidadian artist focuses on “the social and political issues affecting Caribbean society.” Jones visualizes the ways young girls of color, in particular, frequently experience the destructive effects of human trafficking and sexual abuse. “Through each series and their captivating imagery and symbolism, I hope that this is a call to action for everyone to become aware of sex trafficking and stand up against it,” she writes. “I believe that contemporary artists, particularly those that consider themselves ‘activist artists,’ are important today for starting a conversation without using any words.”

Jones shares much of her activism-inspired work on Instagram and has prints available in her shop. (via The Jealous Curator) Pedro Reyes is showing how an object used for harm can be molded into one that promotes life in a project titled “Palas por Pistolas.” Reyes, who originally is from Mexico City, collected 1,527 guns from the Culiacán area in Mexico. The project offered those who gave up their weapons, which were steamrolled publicly and melted, an exchange for a coupon that allowed them to buy electronics and appliances. Reyes used materials from the weapons to create shovels that were then used for planting trees. Since its completion, public schools and art institutions—from the Vancouver Art Gallery to the San Francisco Art Institute to the Maison Rouge in Paris—have received the shovels for community members to use. We have previously marveled at Reyes’ projects involving guns turned into instruments. Find more of Reyes’s work here. (via Intelligent Living) 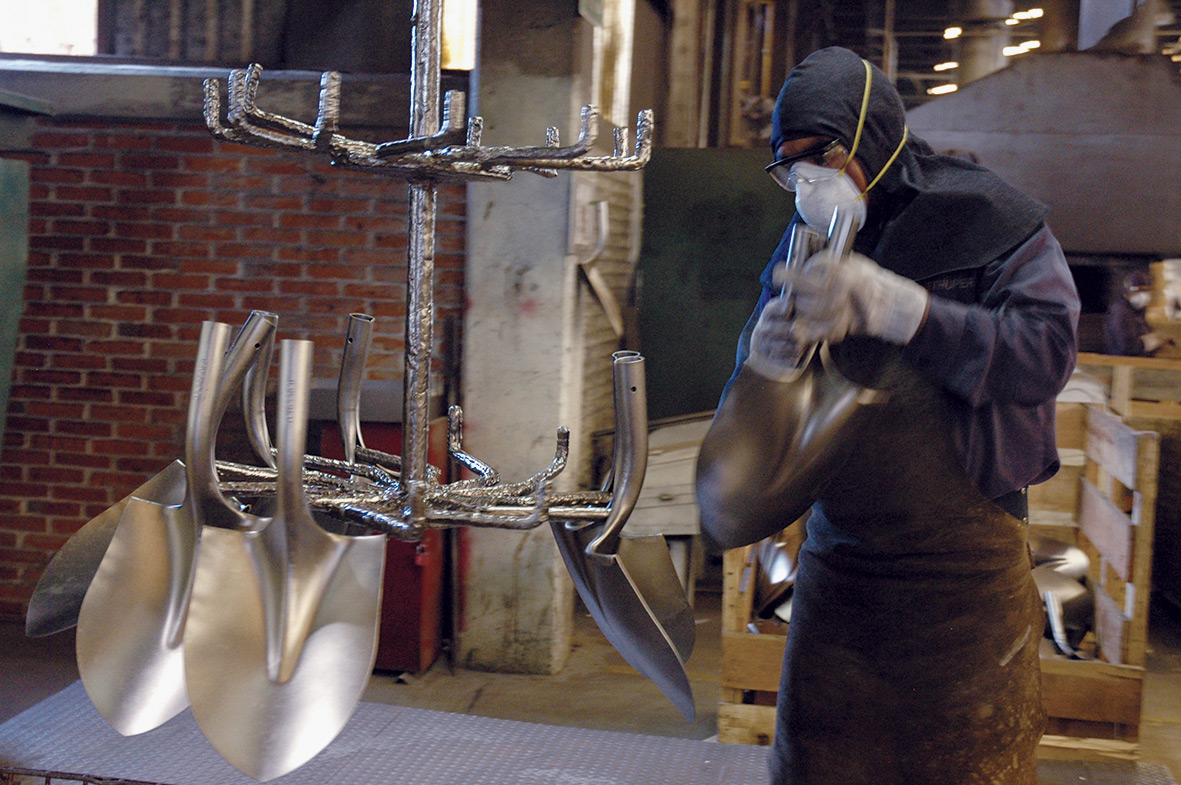 “Dwell: Aso Ebi” by Njideka Akunyili Crosby (2017), at The Baltimore Museum of Art. Purchased as the gift of Nancy L. Dorman and Stanley Mazaroff, Baltimore, in Honor of Kristen Hileman

2020, with its pleasing, almost futuristic symmetry, marks a timeframe to which many visioning plans drafted in the past 20 years were tied. This coming year will show whether the cultural, sustainability, and diversity plans from cities, companies, and organizations around the world will be achieved on schedule. One institution has recently declared a 2020 plan that’s a bold step toward equity and inclusion in the canon-making field of art museum collecting.

According to a statement from the Museum, the BMA is “working to shift the scales within its collections, acknowledging that women artists are still underrepresented in the museum field and within museum collections. We hope this will serve as a model and a first step towards better representation within our field.”

“No Apartheid Anywhere” by Valerie Maynard (1995)

Of the 95,000 works in the BMA’s permanent collection of 19th-century, modern, and contemporary art, only 3,800 were created by women. Accounting for multiple pieces by the same artist, the number of female artists represented tallies 1,500.

“You don’t just purchase one painting by a female artist of color and hang it on the wall next to a painting by Mark Rothko. To rectify centuries of imbalance, you have to do something radical,” Museum director Christopher Bedford said in an interview with the Baltimore Sun. “…we lost…for those who bear/bare witness” by Ebony G. Patterson (2018), at The Baltimore Museum of Art. Purchase with exchange funds from the Pearlstone Family Fund and partial gift of The Andy Warhol Foundation for the Visual Arts, Inc. Photograph: courtesy the artist and Monique Meloche Gallery, Chicago “Planes, rockets, and the spaces in between” by Amy Sherald (2018), at The Baltimore Museum of Art. Purchase with exchange funds from the Pearlstone Family Fund and partial gift of The Andy Warhol Foundation for the Visual Arts, Inc. A set of six figurines made from wood and silicone are designed to help children process difficult memories and emotions. Created Israeli designer Yaara Nusboim, the “Alma” dolls correlate to different feelings: fear, pain, emptiness, love, anger and safety. The unique textures and colors of fuschia spikes, turquoise shards, and pink petals prompt children to engage with the dolls in different ways.

Nusboim envisions the dolls being used as part of play therapy, wherein a therapist can observe their young patient’s behaviors and choices with the toys to help unpack underlying psychological or emotional concerns. “Playing with a toy provides a safe psychological distance from the child’s private problems and allows them to experience thoughts and emotions in a way that’s suitable for their development,” the designer explained to Dezeen.

Take a peek into the design process in the video below, and explore more of Nusboim’s socially conscious designs on her website. (via Dezeen) Over the weekend of November 10, activist group Extinction Rebellion launched a dramatic installation in London’s River Thames. “Our House is Flooding” was comprised of a life-size brick house, complete with flood lights, a security camera, and a satellite dish, sunken into the British capital’s major waterway.

“Sadly, climate-change is something that affects every one of us. We want to respectfully raise awareness of the severity of the impending human-made disaster,” said Katey Burak and Rob Higgs, who co-built the house. “We wanted to make something that people can visually connect to, whilst leaning on the government and the experts to make the changes that need to be made. Until they make the big legal and financial changes, it’s very hard for people like me or you to make significant changes to protect ourselves and the world around us.”

The impact of climate change on the oceans is inextricably linked to the safety and health of land-bound humans and animals as well. In another chilling example of the immediate effects of climate change and rising sea levels, the world’s foremost art event, the Venice Biennale, was shut down just a few days after “Our House is Flooding”, due to damaging sea surges and floods in the fragile Italian city.

Keep up with Extinction Rebellion’s actions that fight for ecological and social justice on Instagram and Twitter, and find ways to get involved on the organization’s global website. (via Hyperallergic)