Over the past month, the art world’s attention has been focused on the Venice Biennale, one of the most notable international shows on the planet. Many artists who are not in the invitation-only exhibition come to Venice to share their work in unaffiliated gallery shows and take advantage of the Biennale-boosted foot traffic. One such artist chose a more unorthodox setup for his Venice sideshow. Banksy (previously) joined the hordes of street vendors selling paintings to pedestrian tourists with a salon-style setup that merged several paintings together. Titled “Venice in Oil,” the multi-panel work depicts a gas-guzzling cruise ship towering over the ancient city as gondoliers in traditional dress row by.

Last week, many media outlets speculated that a stenciled artwork on a canal wall, depicting a migrant child holding up an S.O.S. flare was created by Banksy. But the British artist verifies his own work by sharing it on Instagram and his website, where the piece has yet to appear. The video below offers an on-the-ground view of the artist’s guerrilla street stall.

Update: The morning of May 24, 2019, Banksy claimed the rumored migrant child stencil in addition to his streetside setup.

Yesterday, Banksy (previously) left his mark in the South Wales town of Port Talbot, his first in the UK nation. The area drew attention earlier this year when a World Health Organization report named it the most polluted community in the UK (the designation was later revoked). The street artist seemed to be referencing this undesirable ranking in his piece, which is placed on two adjacent sides of a cement brick garage. A young boy clad in winter gear and with a small sled appears with arms outstretched, his pink tongue catching what appears to be snowflakes. But the nostalgic scene takes on a different meaning when both walls are viewed together, as the “snow” is revealed to be flakes of ash from a dumpster fire. Banksy has declared the work to be his in a video posted earlier today on Instagram, where you can join 5 million others in keeping up with his latest hijinks. (via Juxtapoz)

Banksy Painting Spontaneously Shreds Itself Moments After Selling for $1.4 Million at Sotheby's It was 2003 when Banksy (previously), following a record-breaking auction result for one of his canvases, created a harsh critique of the art market widely known as the Morons image. The photograph was taken from the legendary 1987 Christie’s auction where Van Gogh’s Sunflowers (originally titled Tournesols) broke the record for the most expensive painting at auction when it sold for $39.9 million. In Banksy’s interpretation, the elusive artist replaced the painting by the Dutch master with a text saying “I can’t believe you morons actually buy this s***.” A few years later the image was released as an unsigned edition at the Banksy’s 2006 Barely Legal show in LA, and it resurfaced every time a copy of the Morons print sold at auction.

Banksy has now become a household name, and that his work achieves strong prices at major auctions is no longer a curiosity or exception. When Sotheby’s announced that a final lot of their Contemporary Art Evening Auction on the Friday night of 2018 Frieze week in London would be a previously unseen version of Banksy’s arguably most iconic image, Girl With Balloon, the art world was ready for another exceptional result. The painting on canvas was presented in an exceptionally thick and ornate frame, and sold for 1,042,000 GBP (1,357,726 USD including premiums) which matched the artist’s previous auction record from 2008. The real sensation, however, came moments after.

. “The urge to destroy is also a creative urge” – Picasso As the auctioneer was rounding up the evening and saying thank you and goodbye, an alarm went off and the canvas began to slide out of the bottom of the frame in strips. It seems that the artist built a shredder inside the thick frame that would allow the painting to self-destruct when triggered. At this point, it is unclear how the auction house could have allowed such a stunt, or what legal repercussions this act might have. Once again Banksy has managed to deliver quite the statement to the art market, and all inside the heart of one of it’s strongest and most established bastions. To quote his Instagram post on the surprising incident, “Going, going, gone…” 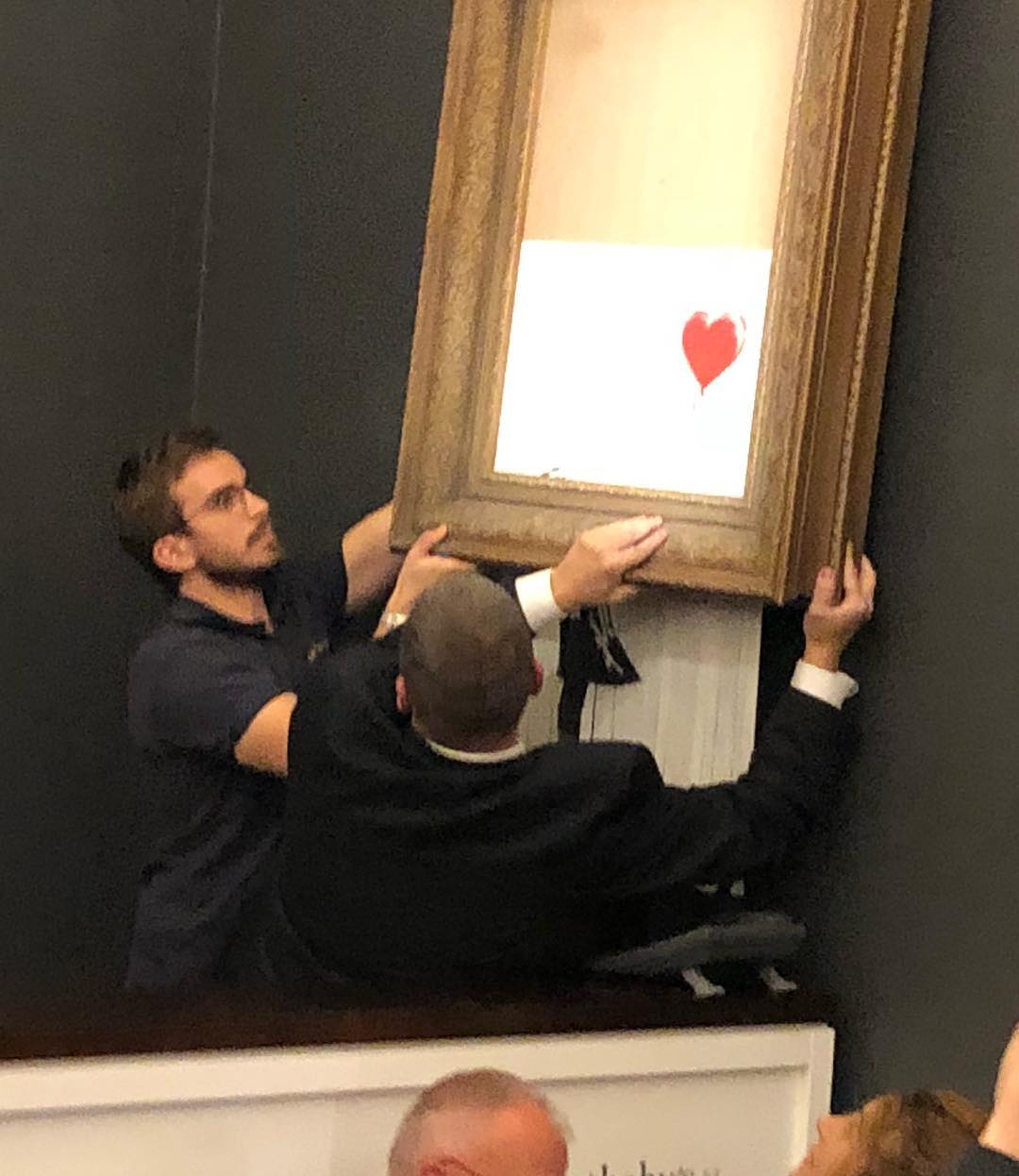