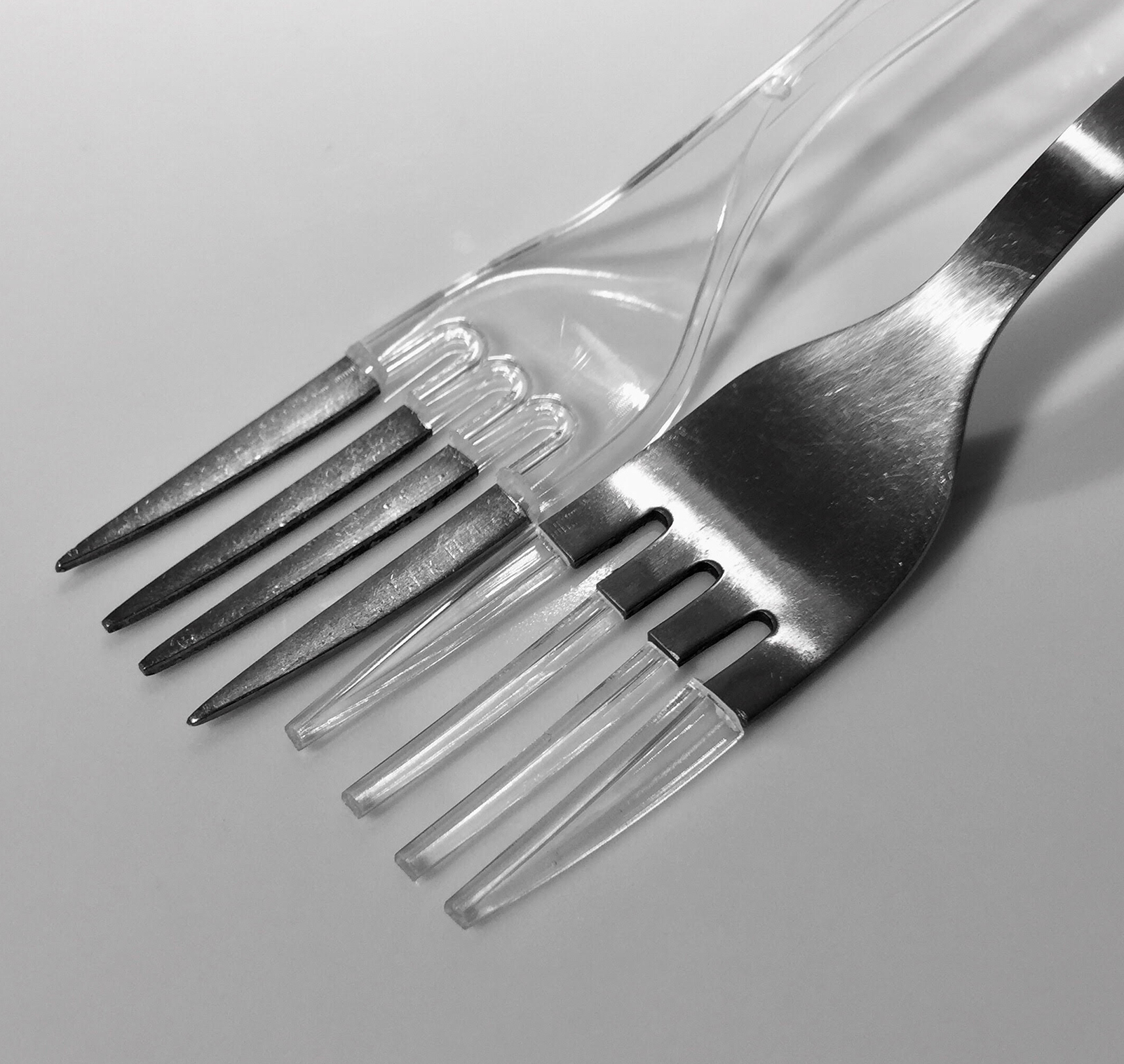 Stefan Visan fashions surreal interventions out of mundane objects: a silver safety pin pierces verdant leaves, a burning candle is sliced and positioned at a tilt, and limp spaghetti lengthens fork prongs. The artist spends hours tinkering in his studio each day, constructing bizarre combinations with no prior intention for what he’ll create. Often sharing his unusual projects on Instagram, Visan doesn’t limit his artistic process to one medium. “I’m always exploring different things, from painting to collage, video collage, photography, illustration… For example, collage is a break from painting and reverse. Everything that I create is hand-made, nothing digital,” he tells Colossal. The result is a series of interventions that merge the ephemeral aspects of nature with enduring, manufactured objects. 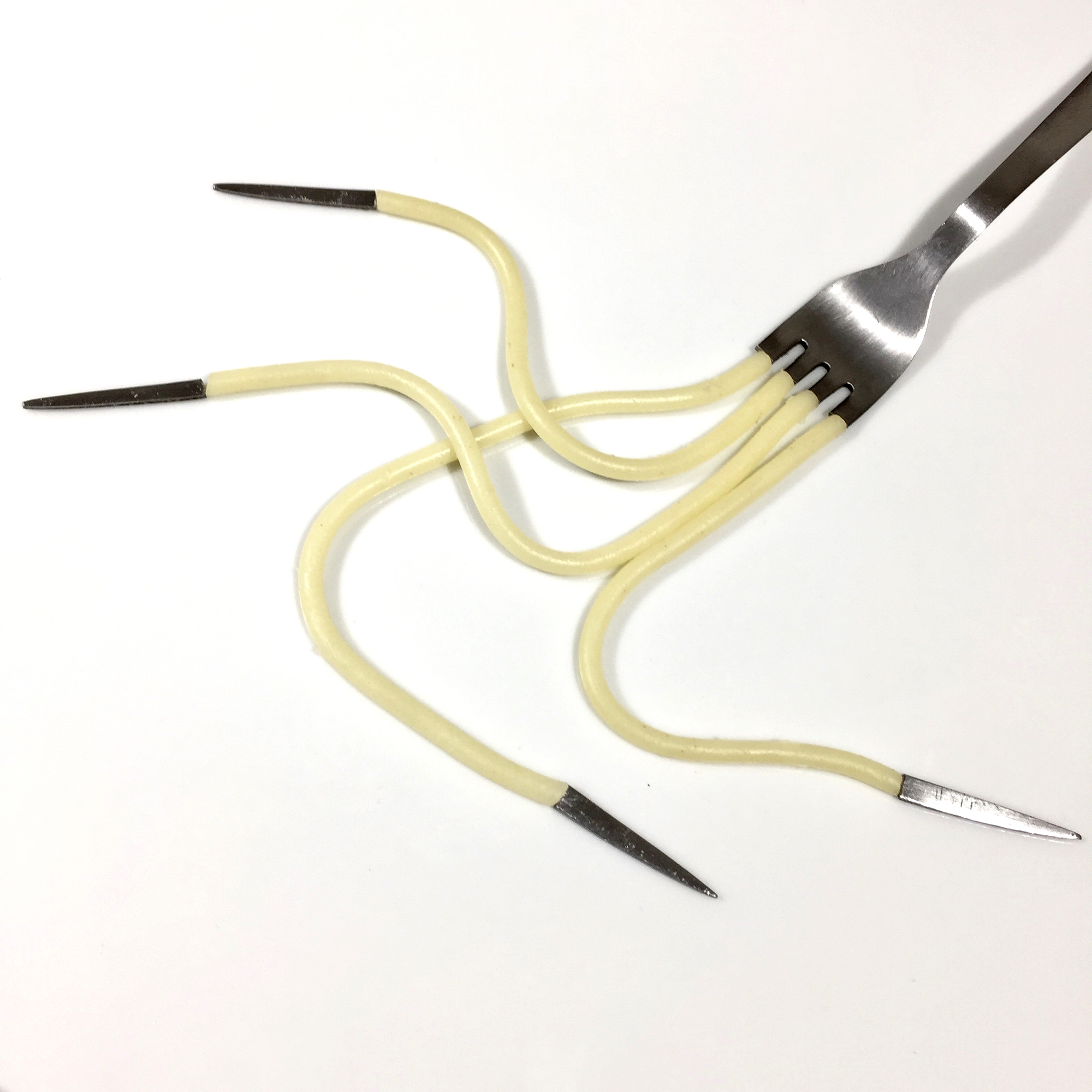 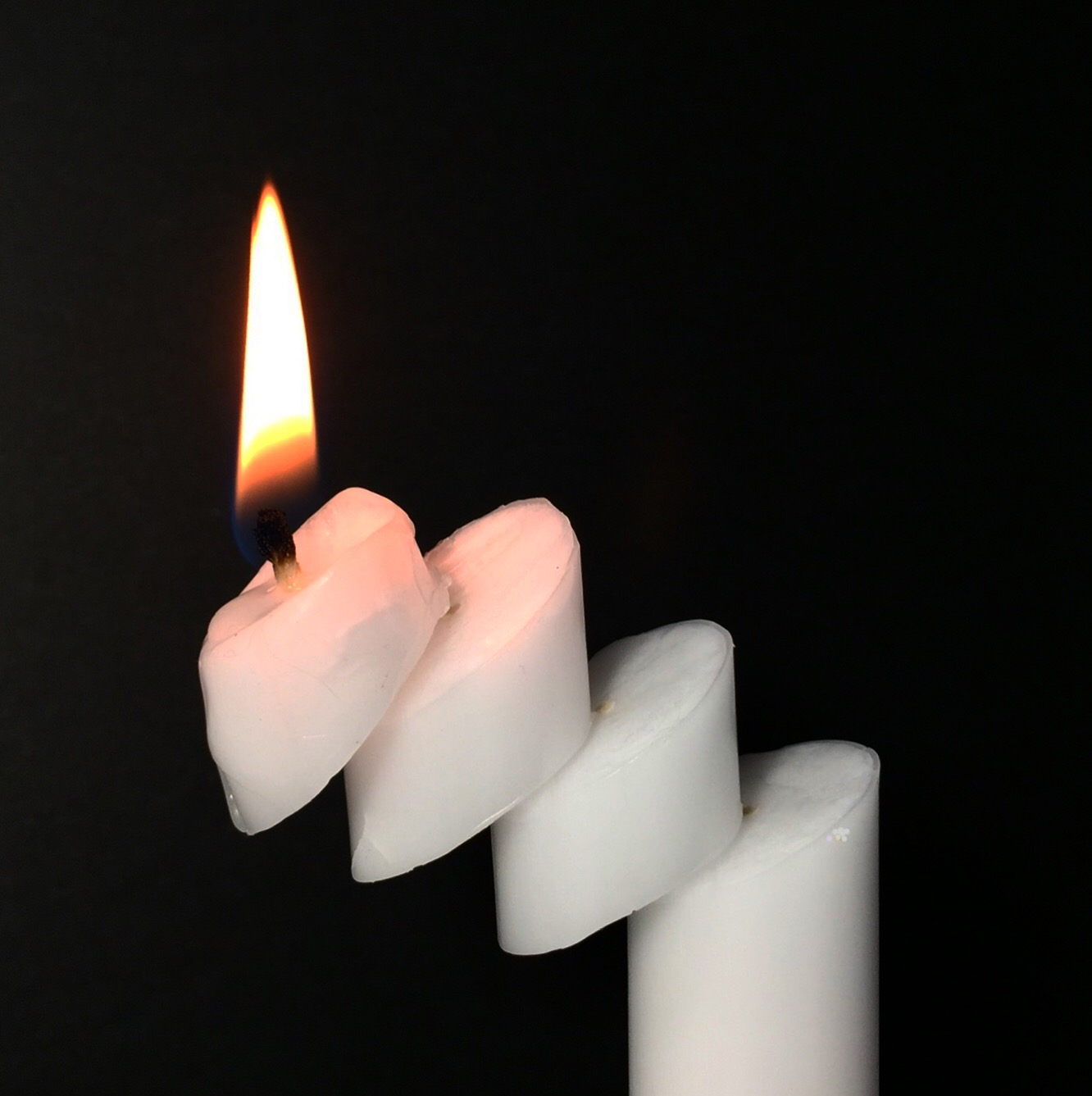 Artist Glenda León affixes objects such as matchsticks, melted candles, and acrylic nails to typewriters she sources from antique dealers in Havana, Cuba. Each item replaces the machine’s rubber stamps or keys, and is presented with a different meaning, such as her piece The Insatiable Writer which contains a variety of collected teeth. “The pieces of human teeth establish an analogy between the act of speaking, chewing, consuming and writing,” León explains in an artist statement about the piece. “In the absence of something to swallow, or imagining only a blank sheet as possible food, writing becomes then a devourer of voids, blank sheets.”

The Cuban artist currently splits her time between Havana and Madrid. Her work is currently included in the group exhibition Relational Undercurrents: Contemporary Art of the Caribbean Archipelago at the Portland Museum of Art through May 5, 2019 and Never Real / Always True at the Azkuna Zentroa in Bilbao, Spain through September 22, 2019. You can see more of León’s interventions, like her cubed piano key sculpture, on her website and Instagram. All photos by Akihiro Yoshida.

Japanese design studio Nendo (previously) just announced their first product designs for 2016 including the Sunset Candle. On the outside the candle appears completely white, but the inside contains a hidden core of colored wax evoking the hues of a sunset that gradually appears as it burns. Not only does the candle change color, but each stage is scented differently, emitting fragrances of bergamot, lemongrass, sweet marjoram, lavender, and geranium. As most of their products are designed in collaboration with clients, with retailers in Japan, or as concepts, these might not readily be available for sale. However you can see more on their site. (via Designboom) 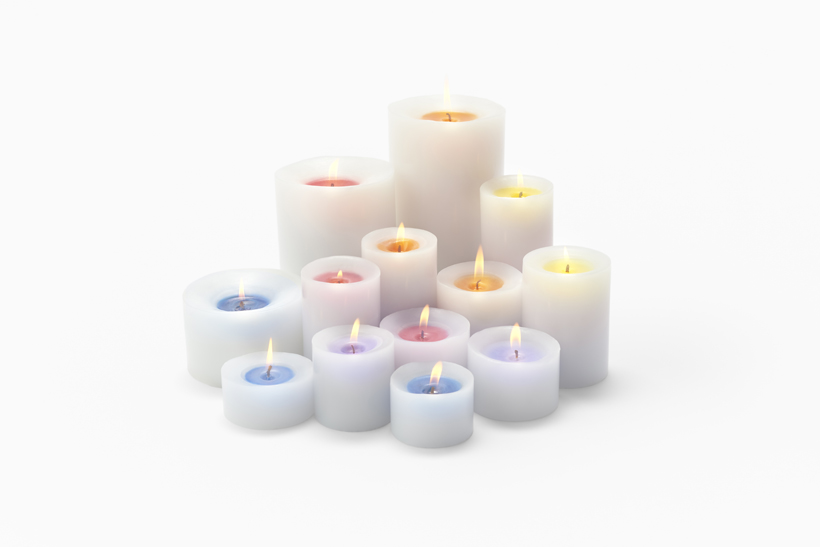 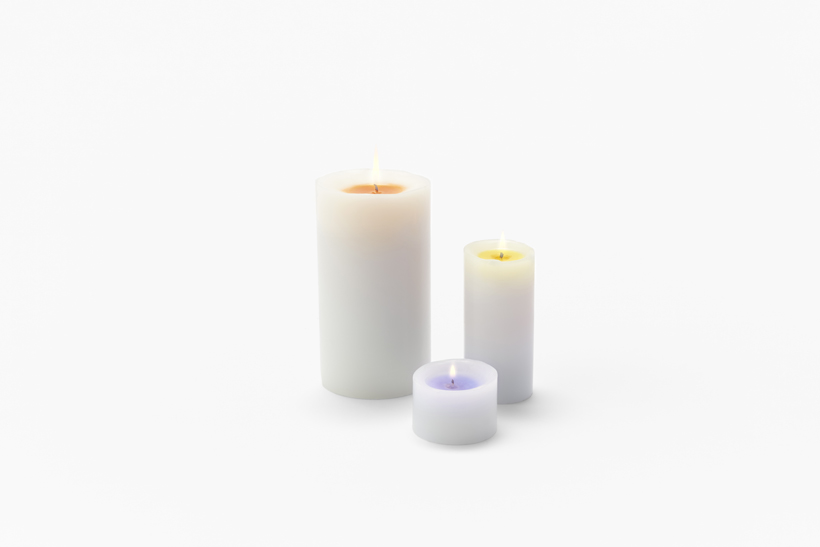 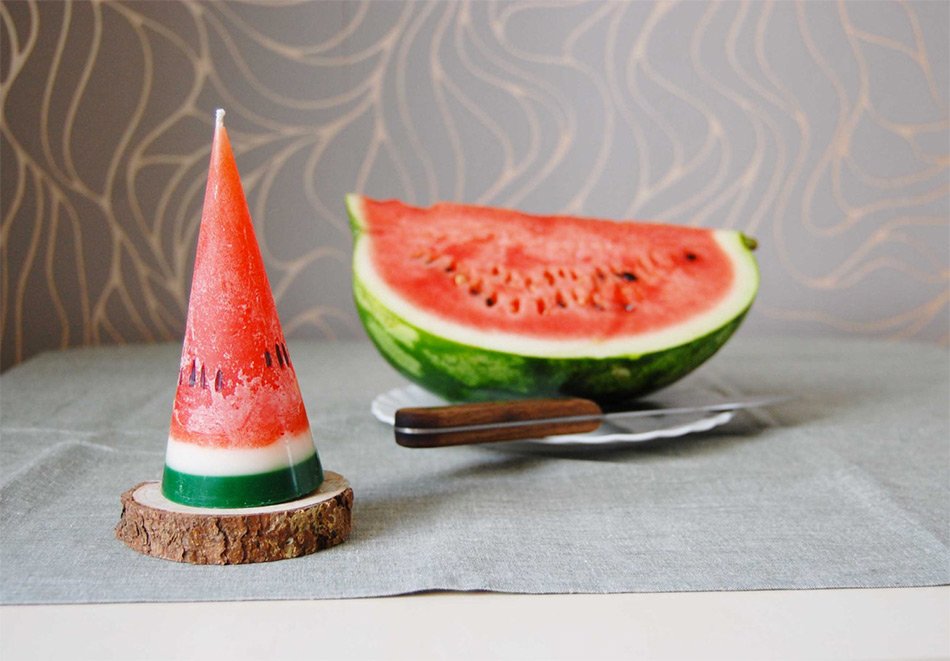 We were completely unaware of how badly we needed candles that look like fruit until we discovered these creations by Lithuania-based candlemaker LessCandles. Each candle is crafted and painted by hand. What you see here only scratches the surface of their pretty amazing designs. (via So Super Awesome) 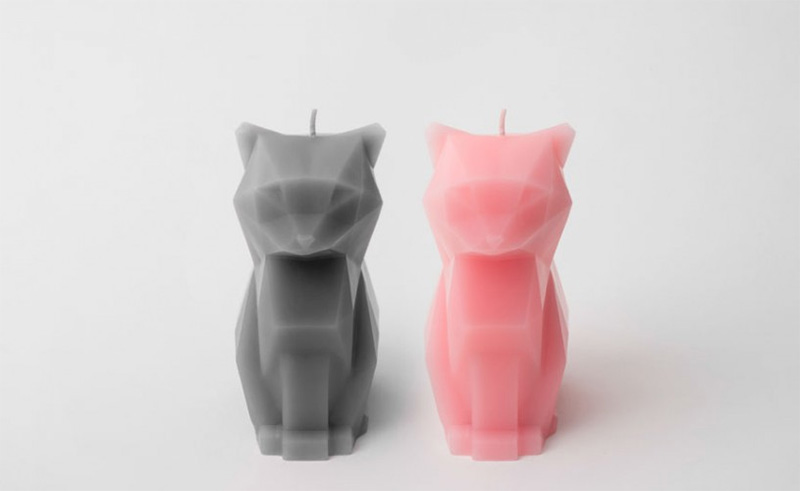 First mentioned in this space back in 2011 as the “Devil’s Candle,” this delightfully creepy candle that melts from a cute geometric cat into a ghoulish steel skeleton was designed by Thorunn Arnadottir and Dan Koval. After going viral around the web it left many wondering where they could get their hands on one, but unfortunately it was not to be, until now. The duo have finally figured out how to mass produce a whole family of morbid little candle pets called PyroPets, the first of which, a cat named Kisa (“kitty” in Icelandic), is available for the first time over on Kickstarter. The candle is actually quite large, measuring almost 7″ tall and has a burning time of around 20 hours.

A Woman Made of Candles

I admit, this leans toward the creepy side, but it’s also pretty captivating too. This wax woman embedded with candle wicks was made by A.F.Vandevorst (which I believe is a Belgian fashion label) for the Arnhem Mode Biennale 2011. Reminds me of this piece by Urs Fischer. (via lenn cox)