For well over a decade California artist Jim Denevan (previously) has made his mark in the sand, etching elaborate geometric artworks on beaches around the world using little more than a rake or found stick. The pieces last only a few hours, or begin disappearing even as he works, as the tides quickly erase each design leaving only a memory or a photograph. Great Big Story recently visited Denevan and shot this brief profile of the artist as he created a number of pieces. 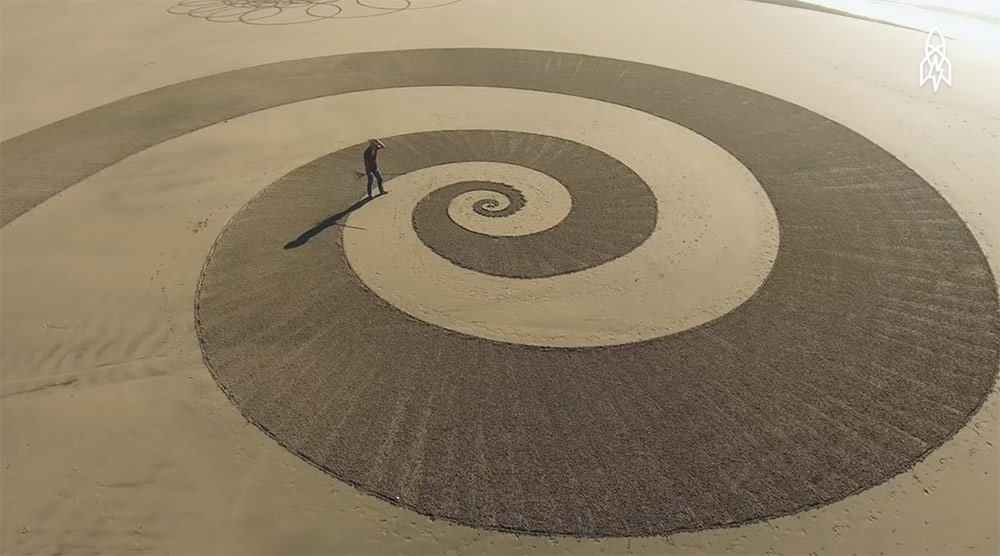 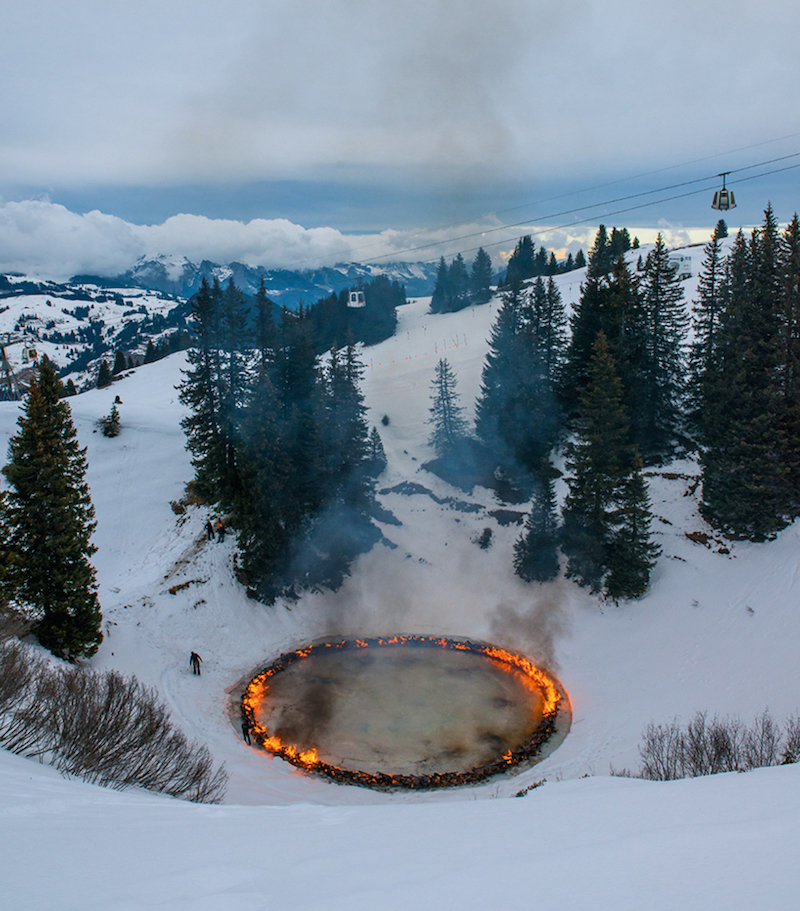 Burning brightly amidst the snowcapped mountains of the Swiss Alps is Douglas Gordon and Morgane Tschiember’s fiery installation As close as you can for as long as it lasts. The temporary piece of blazing land art was produced for the biennial event Elevation 1049, a collection of 11 sculpture, performance, video and sound installations supported by the LUMA Foundation and situated within Gstaad, Switzerland.

The piece is a sculptural and performance-based tale of the lonely traveler, as well as a call and response between the two artists involved in the piece. Tschiember built the circular fire, and as a reaction to her landscape meditation, Gordon installed a sound piece. The howling work is meant to trigger primal fears of dangerous animals and the dark woods, drawing visitors closer to the warm fire. 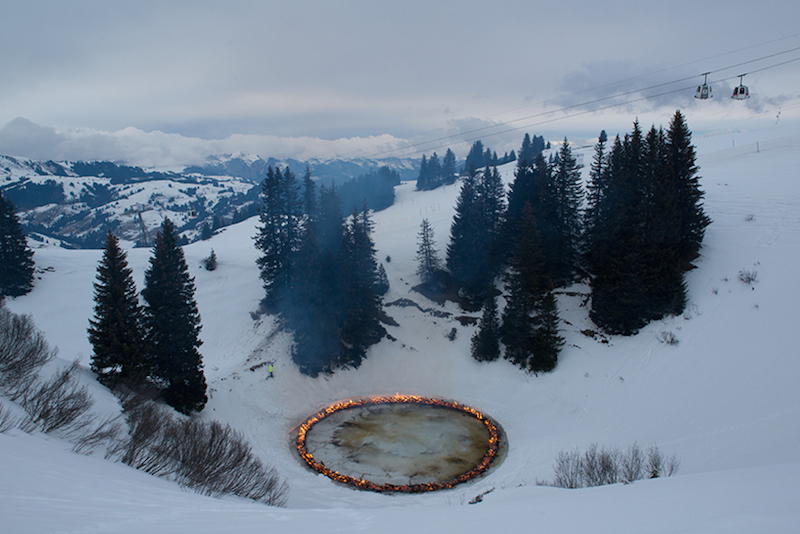 French artist Estelle Chrétien often works with the earth, producing land art installations that subtly weave a human experience into the natural landscape. In her work Ground Operation, Chrétien dug a small division into a lawn which she then stitched back together with electrical cable like thread into a wound. This 39-foot piece remains open at the end however, leaving us to question whether it is slowly healing or perhaps coming apart. (via This Isn’t Happiness, The Creators Project) 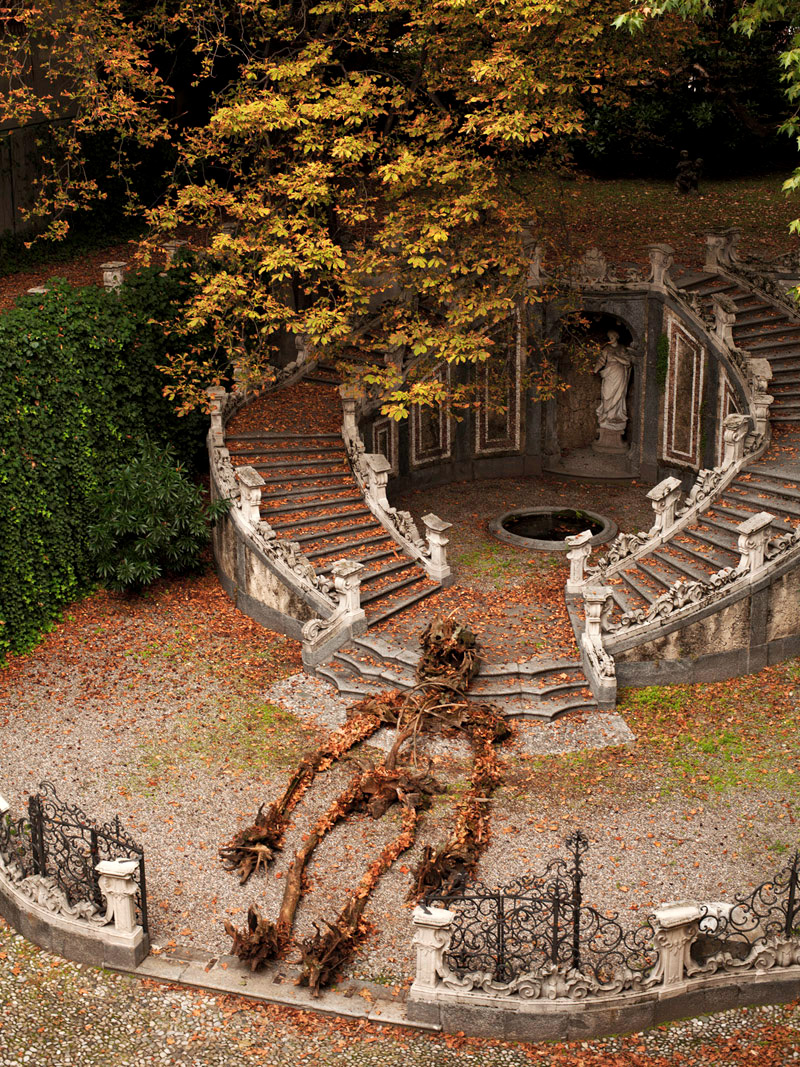 In this 2012 installation, street artist Never2501 assembled a variety of found vegetation to form an eerie skeleton at the base of some steps in the idyllic gardens of the Museo Archeologico Paolo Giovio in Como, Italy. The piece was titled “In Cammino Per Trasformarsi Nell’istante Presente” (Moving to Transform into the Present) and could be interpreted as a harbinger of the seasons with the decaying root stumps and limbs pulled from a nearby forest, fit together without aid of any additional materials. Or maybe it’s just an incredibly disturbing thing to stumble onto when walking through the woods? You can see more photos of the temporary piece here, and follow Never2501’s more recent work on Instagram. (via This Isn’t Happiness, StreetArtNews) Sapporo-based freelance illustrator and artist Baku Maeda tends to see the world a bit differently. His simple observations and humorous interventions like Leaf Beasts and Ribbonesia have gone viral the last few years. He recently shared this fun series of clipped square flowers on his Tumblr and Instagram which he refers to as Bit Leaves. Situated just south of Las Vegas in the middle of the desert stands seven stacks of brightly colored boulders— forms which appear to be in a line or cluster depending on how you view their arrangement. From one side the structures line up neatly in a row, while from the other they seem to be positioned in one giant mass. The cairn-like towers are Swiss artist Ugo Rondinone‘s “Seven Magic Mountains” and stand between 30 and 35 feet tall. Each contains between three and six human-sized masses which are all locally-sourced limestone painted an assortment of dayglow hues.

The stacked forms are intended to appear both stable and on the edge of collapse, similar to their duality of being both nature made and artificial. “Seven Magic Mountains is an artwork of thresholds and crossings, of seclusion and gathering, of balanced marvels and excessive colors, and the contrary air between the desert and the city lights,” states Rondinone. “Seven Magic Mountains elicits continuities and solidarities between the artificial and the natural, between human and nature.”

The site specific work was produced by Art Production Fund, New York and the Nevada Museum of Art in Reno. The monumental piece of land art will be on view for two years beginning in May of 2016. (via Juxtapoz) 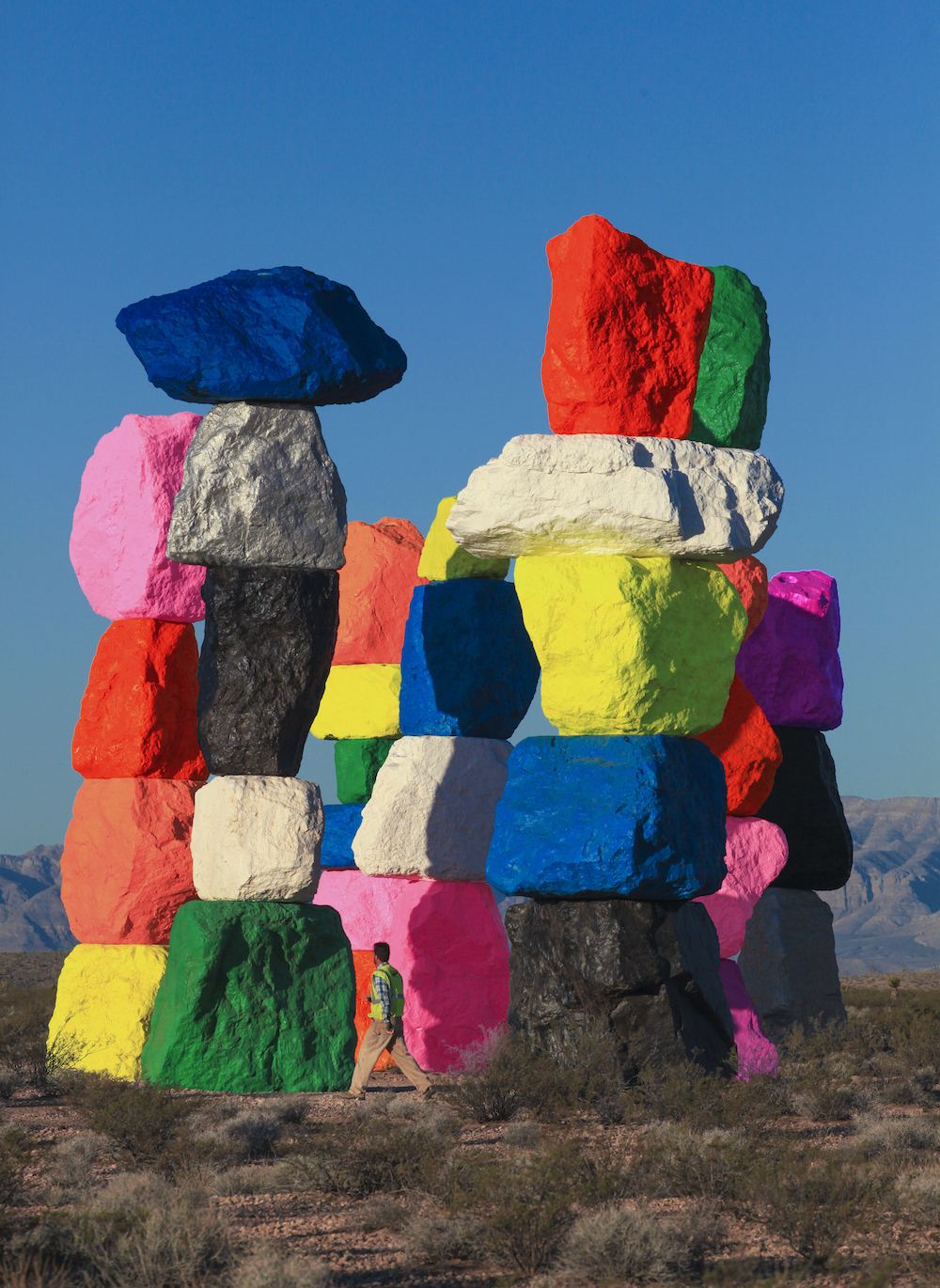