At first, the garments look as though they’ve been spun with a traditional medium—wool or yarn—but on closer inspection, it becomes apparent that the thin and springy mesh-like material is composed of thousands of elastic bands that have been knitted together. Made by Japanese designer Rie Sakamoto, the handmade collection includes a jacket and dress, each of which illustrates the diverse functionality of stationery items like rubber bands.

Sakamoto’s “rubber collection” initially was exhibited at Tama Art University in Toyko as part of a graduate exhibition and the garments, which took Sakamoto half a year to make, reflect on how overlooked materials and objects can have diverse uses in fashion, contemporary design, and art.

The flexibility of the soft bands allows Sakamoto to stretch the rubber to make different-sized garments that are adaptable to various bodies. Similar to how wool garments are created with needles, Sakamoto makes each garment by knitting the rubber bands together. When closely observed, the materials are a matte, sand-like color, but when thousands are merged together into textiles or fashion pieces, an earthy orange emerges. When Sakamoto’s garments are held up in the light, they become almost iridescent SÖHKA Lamp: A Customizable Light Made from Rubber Bands 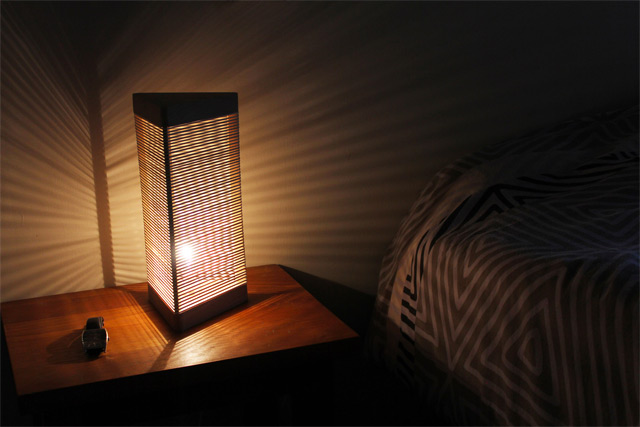 The SÖHKA Lamp is the latest creation from French designer Malet Thibaut (previously). The light is composed of five wooden pieces and 60 rubber bands that can be assembled in practically unlimited configurations to create different lighting patterns for maximum geometric shadow fun. The SÖHKA Lamp will be available for purchase via his website in the near future.