Top: “The Incredulity of Saint Thomas” (1675) by Mattia Preti. Bottom: Photo by Brad Smith/ISI Photo. All images courtesy of ArtButMakeItSports, shared with permission

What do an injured Kelley O’Hara and “The Incredulity of Saint Thomas” by Italian Baroque artist Mattia Preti have in common? The exasperated soccer star and 1675 religious masterpiece find unexpected synchronicity thanks to LJ Rader, the creator behind the wildly popular meme account ArtButMakeItSports.

Since 2015, Rader has been cleverly pairing photos from professional sports with art historical works. What began as a personal project that involved visits to museums and some of the week’s most intensely emotional images from soccer matches or basketball games has evolved into Twitter and Instagram accounts with considerable followings.  “At first, it was starting with the art and then thinking about what it could be if it were sports,” he says. “As time went on, I realized the ones that resonated the most were the mashups—and using sports images that were in the moment/news cycle played the best.” A running Megan Rapinoe might imitate Apollo chasing Daphne, for example, or a long, lean leg might evoke that of an Alberto Giacometti sculpture. Beyond the obvious visual similarities, though, Rader’s mashups tend to go a step further as they masterfully draw the two seemingly diametric fanbases and cultures together. One comparison features an image of the late Celtics player Bill Russell and Jacob Lawrence’s Struggle Series, for example, because both the basketball great and American painter were highly active in civil rights work.

Now numbering upwards of 1,000, the all-star pairings are an internet sensation in their own right, and ultimately, Rader’s goal is to dive into “what art means and (explore) the intersection of culture between two sides—art and sports—that rarely meet.” 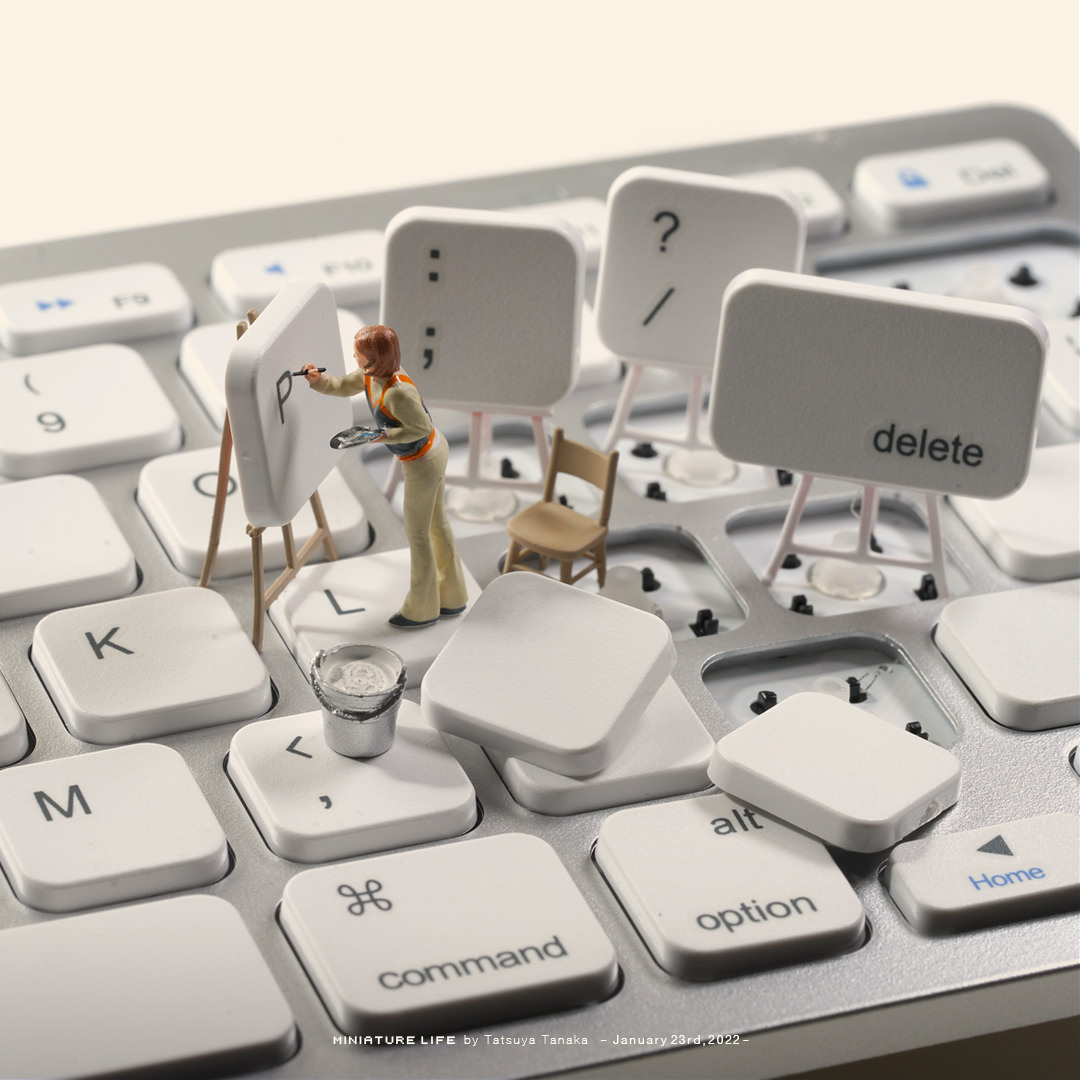 A scroll through Tatsuya Tanaka’s Instagram chronicles the everyday happenings of a cleverly designed world in miniature. The Japanese artist (previously) has spent the last decade reimaging life-sized objects like pencil sharpeners, sponges, and slippers as tiny sets for his cast of characters: a “P” key rests on a painter’s easel, bobsledders barrel through a bowl on a hot pepper, and ice skaters race across a white surgical mask.

Released daily as part of his ongoing Miniature Calendar project, the works often correspond with current events and cultural moments, including Tanaka’s recent scenarios referencing the Winter Olympic Games. “The theme of my work is ‘mitate’… to replace something around us with something similar or that looks like it. It is important to use something that everyone knows as a motif for my work,” he writes.

For a look behind-the-scenes, click through each day on Tanaka’s site, where he shares multiple perspectives of every work. 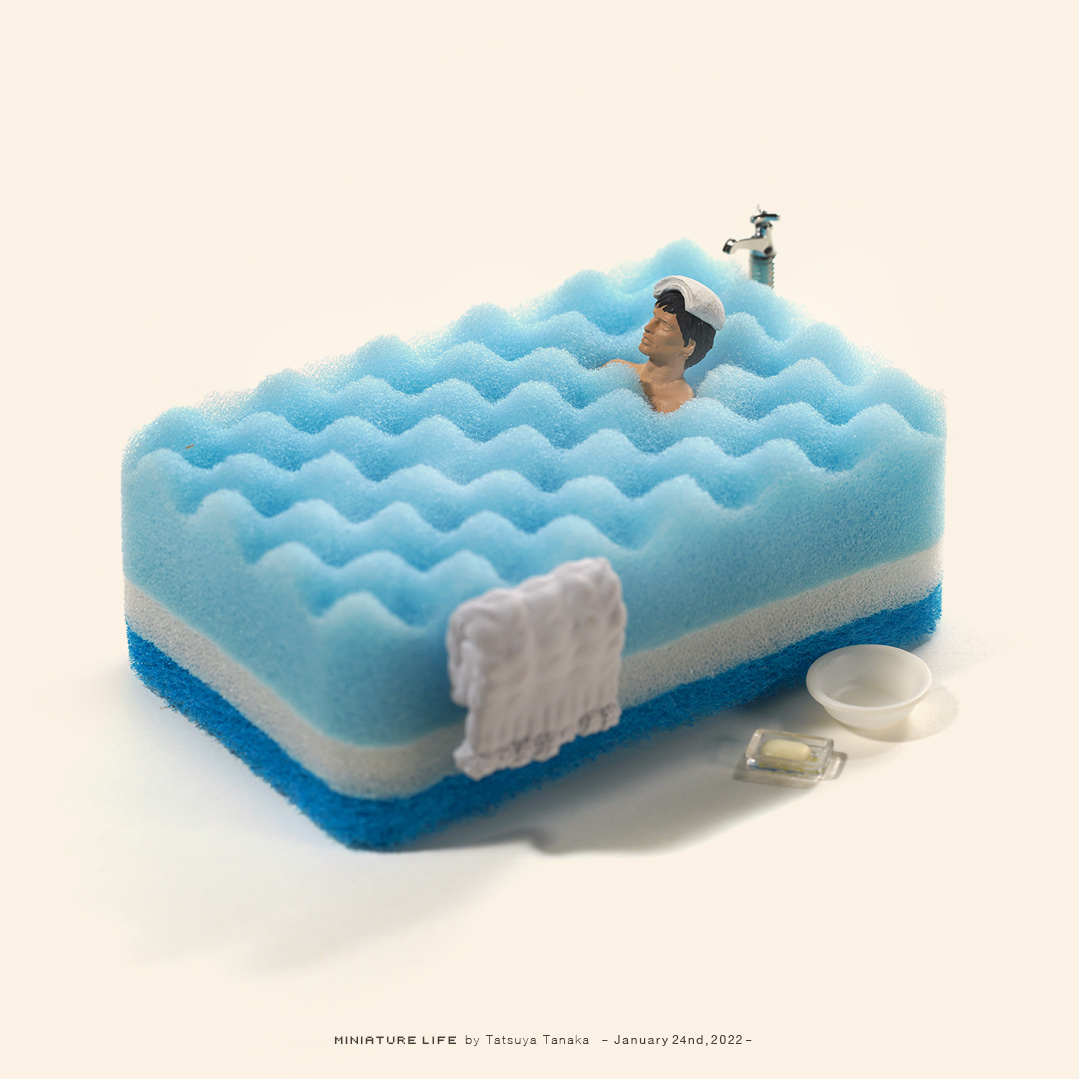 A scroll through Vanessa Mckeown’s Instagram reveals a bottomless trove of absurdity and the playfully unexpected: cooked spaghetti pours from a bronze tap, a tennis ball bounces off a tennis racket made of waffles, and a trio of donuts hangs from a toilet paper holder.

The London-based artist has an eye for the strange, quirky possibilities of humble everyday objects like snacks and plants, and her body of work extends back to 2015 when she photographed minimally composed interpretations on bright monochromatic backdrops. In recent years, she’s brought more color, texture, and objects into her pieces, using checkered tablecloths and the tiled wall of a bathroom to add extra dimension. “At the moment, I want to make my work more dynamic and bring it more to life, more stuff!” she says. “I just want to be free with it and not so rigid, which is a challenge as I’m quite rigid with things.”

To add Mckeown’s bag of beans, bread legs, or another one of her clever constructions to your collection, pick up a print in her shop. You also might like Nicole McLaughlin’s edible apparel. 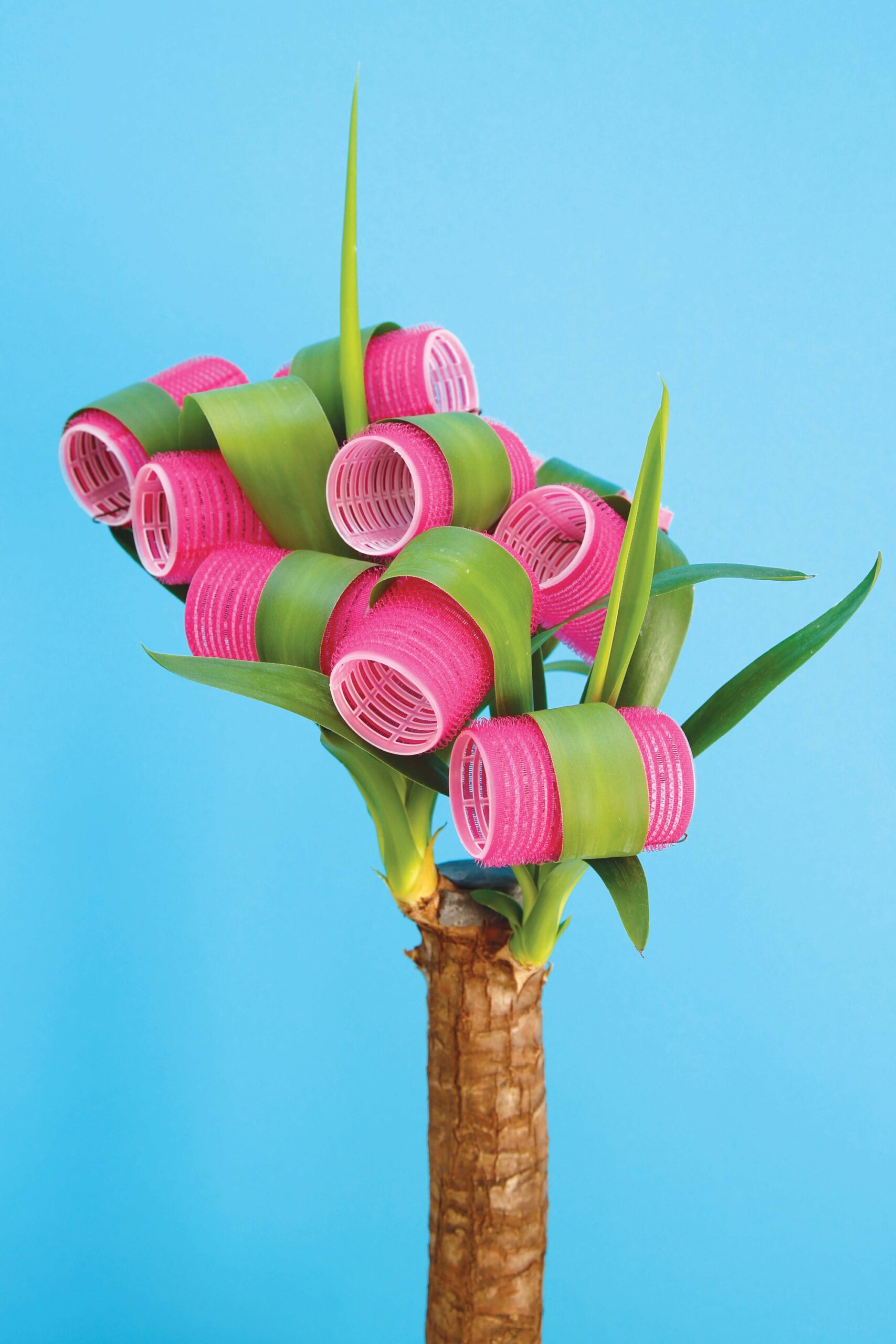