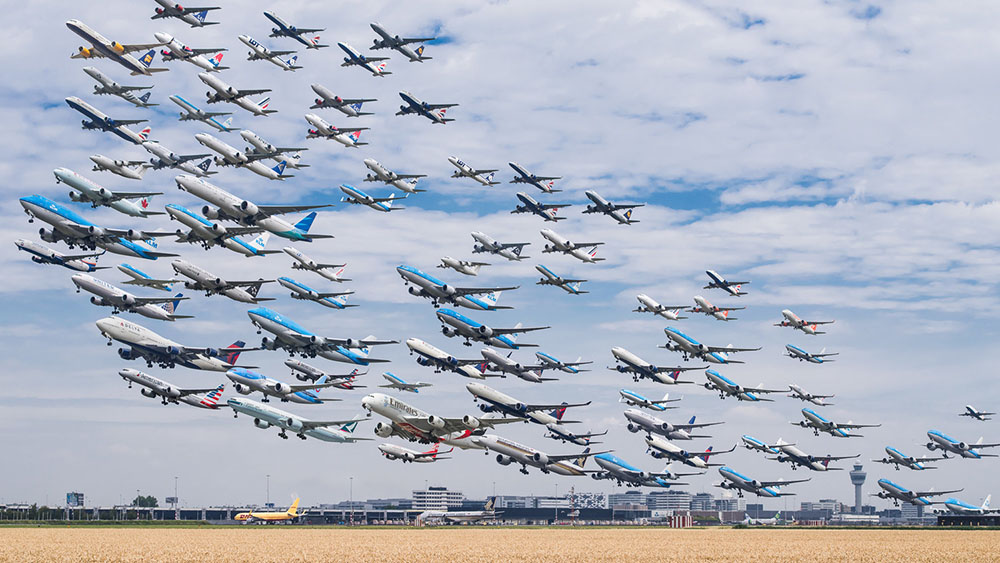 For his ambitious Airportraits series, photographer Mike Kelley sets up camp outside of airports and meticulously photographs planes as they takeoff and land—shooting thousands of photos per location. He then uses Photoshop to isolate the planes and combines the images into the composite “portraits” you see here. Each image tells a fascinating story about the nature of each airport and the many unseen variables that affect the flight paths of each airport like noise regulations, plane size, and air traffic patterns.

When he initially began the project two years ago, Kelley’s plan was relatively straightforward: fly to 10 or so cities around the globe and spend a day or two at each airport scouting the location, taking photos, and then off to the next destination. This plan worked well in Europe where the weather was consistent, but soon he faced the reality that seasonal weather in places like Japan was completely unpredictable. In Tokyo he left without a single usable photo after days of trying. Some cities he had to return to 2-3 times in hopes the weather would improve, and in other places it would take nearly a week to photograph enough planes to make an image.

During editing, most planes are left “as is” in the location they appeared in the sky while taking off. Planes in the processes of landing proved to be more difficult. “For the landing images, I did take slight artistic liberty with the position of the aircraft, because in real life the planes follow a very specific glidepath to the touchdown point,” Kelley shares with Colossal. “If I hadn’t moved them, all the planes would be directly on top of one another and there’d be no real dynamics or movement in the image.”

In all, Kelley created 19 composite images you can explore on his website, all of which are available as limited edition fine art prints. You can see more of his photography on Instagram. (via Boing Boing, Kottke)