A Scientifically Accurate Hand-Knit Sculpture of the Human Brain by Dr. Karen Norberg In 2009, Psychiatrist Dr. Karen Norberg from the National Bureau of Economic Research in Cambridge, Massachusetts decided to create a fibrous doppelgänger of the human brain. Using different colored yarns she knit together the two-sided organ one and a half times its normal size, with a cerebellum and spinal cord attached at the end. Dr. Norberg told the Telegraph that the piece was a labor of love. For me, there were two humorous aspects,” she explained. “One was simply to undertake such a ridiculously complex, time consuming project for no practical reason. The second was the idea of making a somewhat mysterious and difficult object – a brain – out of a ‘cuddly,’ cheerful, familiar material like cotton yarn.”

Dr. Norberg created the individual parts of the brain, such as the brainstem and amygdala, before sewing the lightly colored pieces together in its final form. A comparison of the textile sculpture alongside scans from a real human brain can be seen in the image below. (via Women’s Art) 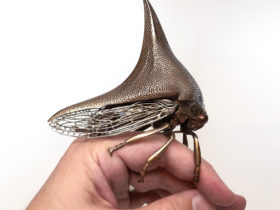