By Jessie Wong. All images courtesy of Paperboy, shared with permission

Nineteen international illustrators have banded together to raise money to stop violence against Asian communities. Curated by the new platform Paperboy, a print sale called MUST BE NICE! asked the artists to share what they love about Asian culture, which resulted in an electric array of works celebrating everything from food and animals to traditional craft. Each sale directly supports the illustrators, and the remaining profits will be donated to organizations combatting discrimination and hate, including Besea.n, End The Virus of Racism, and Hackney Chinese Community Services. See some of the prints below, and shop the full collection on the Paperboy app, which you can download on its site. All images © Sentrock, shared with permission

In honor of Mental Health Month this May, Chicago artist Joseph Perez, who works as Sentrock, created an illustrated series celebrating the people and scenes around his studio in the city’s Pilsen neighborhood. “I started doing it just for myself, to take an hour or two and share my thoughts or reflections for that day or the day prior,” he tells Colossal.

Lively, expressive, and deeply empathetic, the resulting illustrations draw on Sentrock’s background as a graffiti artist and his connection to those around him. They tell a story about the neighborhood that’s historically been rich with Latinx culture and portray the sights and experiences shared by the community through a distinctly personal lens. The artist explains:

I started allowing myself to reflect on the past, present, the current situations I found myself in. I allowed myself to reflect on my everyday life, whether boring, exciting, or just my imagination of the moment. I started to capture the people outside my studio, whether friends or strangers. My purpose for this was to initiate a connection with the people around me, the community.

Sentrock began with reference photos of friends, family, and community members before reinterpreting them in bright, vivid renditions of his signature bird character. Usually depicted as a beaked mask, the recurring image is Sentrock’s analogy “to humanity: a person who is able to find or escape to their freedom by placing them in a different reality.” In the new works, the character travels from person to person, sometimes worn by kids skateboarding down 18th Street and others by the artist himself, like in the moving portrait of him and his mother.

Head to Instagram to see the full series and original images, and if you’re in Chicago, keep an eye out for the designs, which Sentrock plans to wheat paste around the city. Portrait of the artist with his mother Longtime Colossal readers will recognize the surreal, fictionalized scenes illustrated by Marija Tiurina (previously). Whether a bizarre mishmash of thoughts from quarantine or a crowded parallel universe in North London, Tiurina’s works are a seemingly endless exploration of mystery, delight, and general chaos, themes the London-based illustrator continues in her new series Stereogramos—the title is a portmanteau blending the “Spanish world for a bouquet (of endless objects and limbs, in my case) and ‘-os’ ending that is typical to the worlds of plural female form in Lithuanian language,” she says.

Comprised of three jiggling gifs and a longer, scrolling animation, the works deviate from Tiurina’s static paintings and build a playful, peculiar setting around three central characters in her signature style. The female figures exude an air of cool disinterest and are surrounded by objects defining their unqiue personalities, including greasy slices of pizza, cracked vinyl, and even a disturbingly severed limb.

To create the dizzying works, Tiurina began by drawing and painting the individual elements with watercolor, and after cutting each out, she layered them into rich, abstracted scenes with a single central character. Her stereograms, or two-dimensional renderings that give the illusion of greater depth, diverge from historical stereoscopic images that positioned two photos side-by-side on a flat plane viewed with binocular vision. Instead, the illustrator merges the two into one glitching visual that appears in three dimensions.

Tiurina recorded her entire process for Stereogramos, which you can see in the video below, and you can find more of her packed, sprawling illustrations and similarly looping Droste Effect watercolor on Behance and Instagram. She also sells originals, prints, and books on her site, and if you’re in Reykjavík, stop by SIM Residency to see her work as part of a group show that’s open through May 29, 2021. 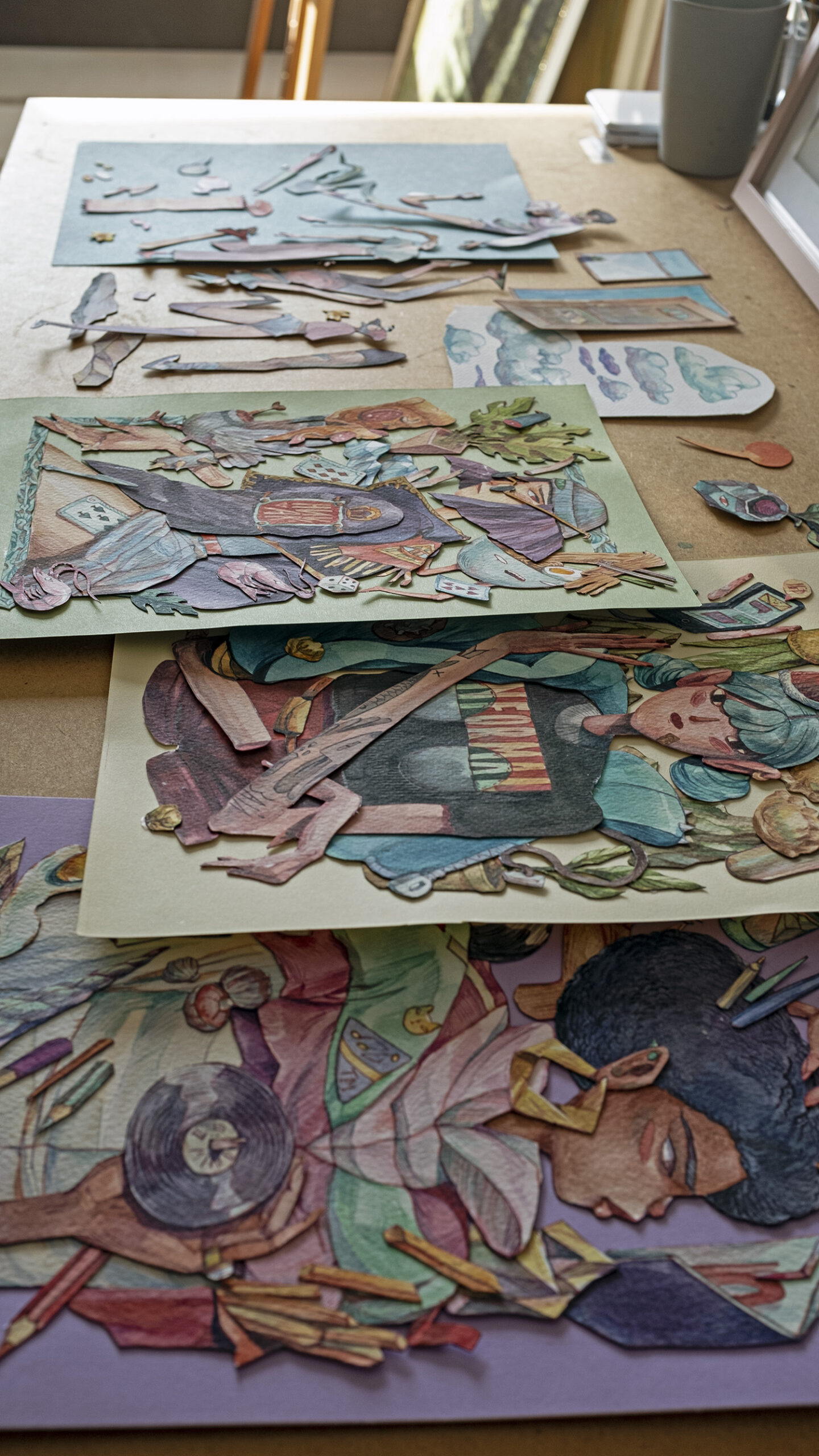 Cross A Bridge: A Typewriter Illustration Backdrops a Meditative Trip to Pittsburgh's Carnegie Museum of Art All images courtesy of Phaidon

Banksy Graffitied Walls and Wasn’t Sorry introduces the life and work of the anonymous street artist to some of the youngest readers. The 48-page book is cleverly written as a plainspoken autobiography, detailing both Banksy’s aesthetic sensibilities and surveying his decades-long career, including references to Dismaland, his “Better Out Than In” residency in New York, signature rats, and the subversive, overtly political messages of his pieces and antics. Illustrated in Fausto Gilberti’s whimsical style, the largely black-and-white drawings are playful and humorous and contextualize Banky’s profound impact and mysterious, unapologetic reputation in a manner fit for kids.

Published by Phaidon, Banksy Graffitied Walls and Wasn’t Sorry is Gilberti’s fourth in a series exploring the legacies of some of the most well-known artists, including Yayoi Kusama, Jackson Pollock, and Yves Klein. Shop the complete collection on Bookshop. (via Kottke) 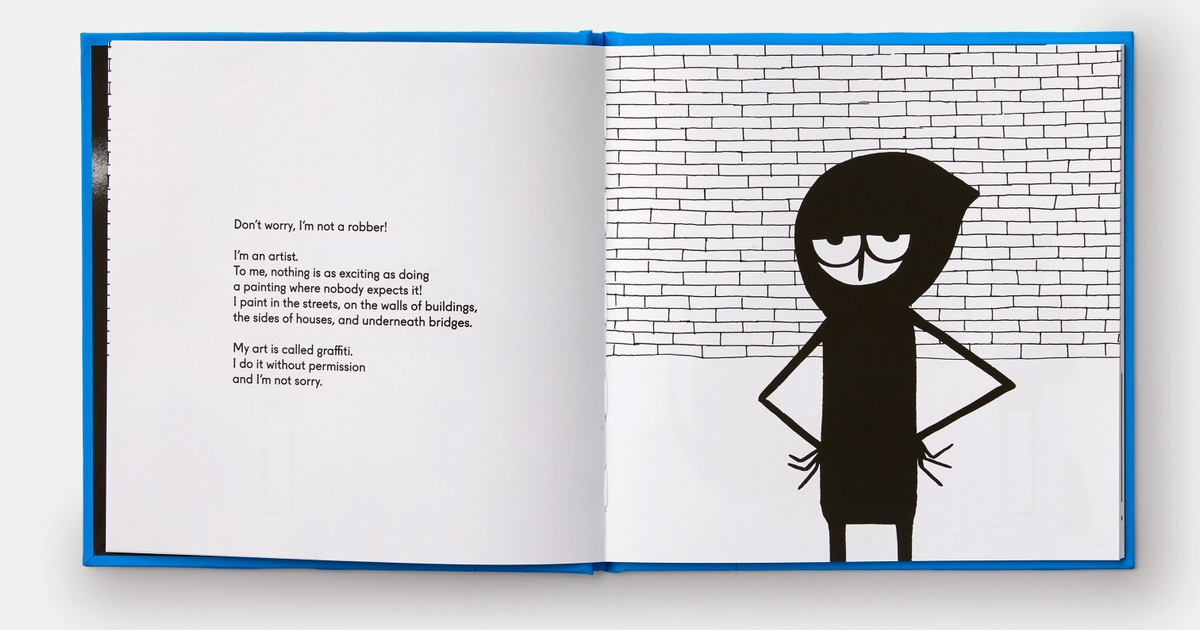 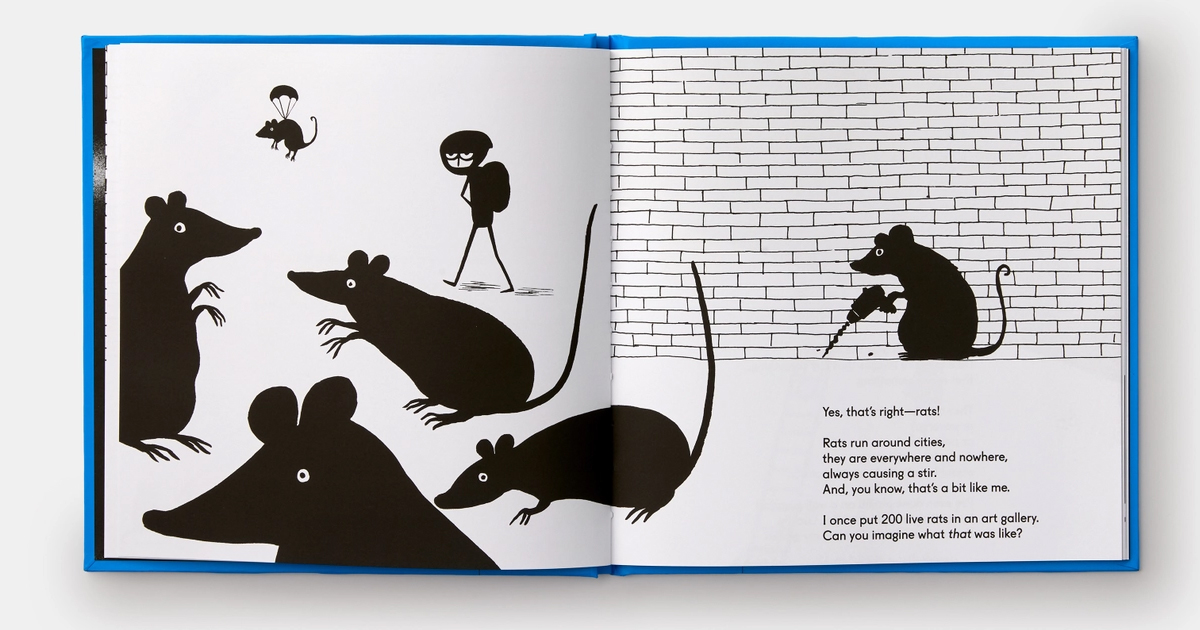