Our Editor-in-Chief Christopher Jobson conducted this interview with photographer Brooke DiDonato via phone. The conversation has been edited for brevity.

Brooke: It’s interesting that you ask because I was just having this conversation with a friend. I think I use that word because it’s so readily accessible for people, but when I look at a lot of my work, I actually don’t feel like it is surreal because it’s all based in reality. Everything is sort of familiar, and it’s almost a distortion of the familiar, so there’s not anything particularly fantastical about it, other than maybe the narrative that’s playing out or the position of the subject in the context of that reality.

Somebody recently told me that my work falls in line with magical realism, which I’d never really explored as a genre, and I’ll continue to refer to it as vaguely surreal because I can’t imagine being in a conversation at a bar and saying, “Oh, I make magical realism.” What is that?

Brooke: I think that I like that “surreal” is an umbrella term, but it really is more of a distortion of reality—but it doesn’t bother me, and I’ve never been called that and thought, “Oh my gosh, change that.” 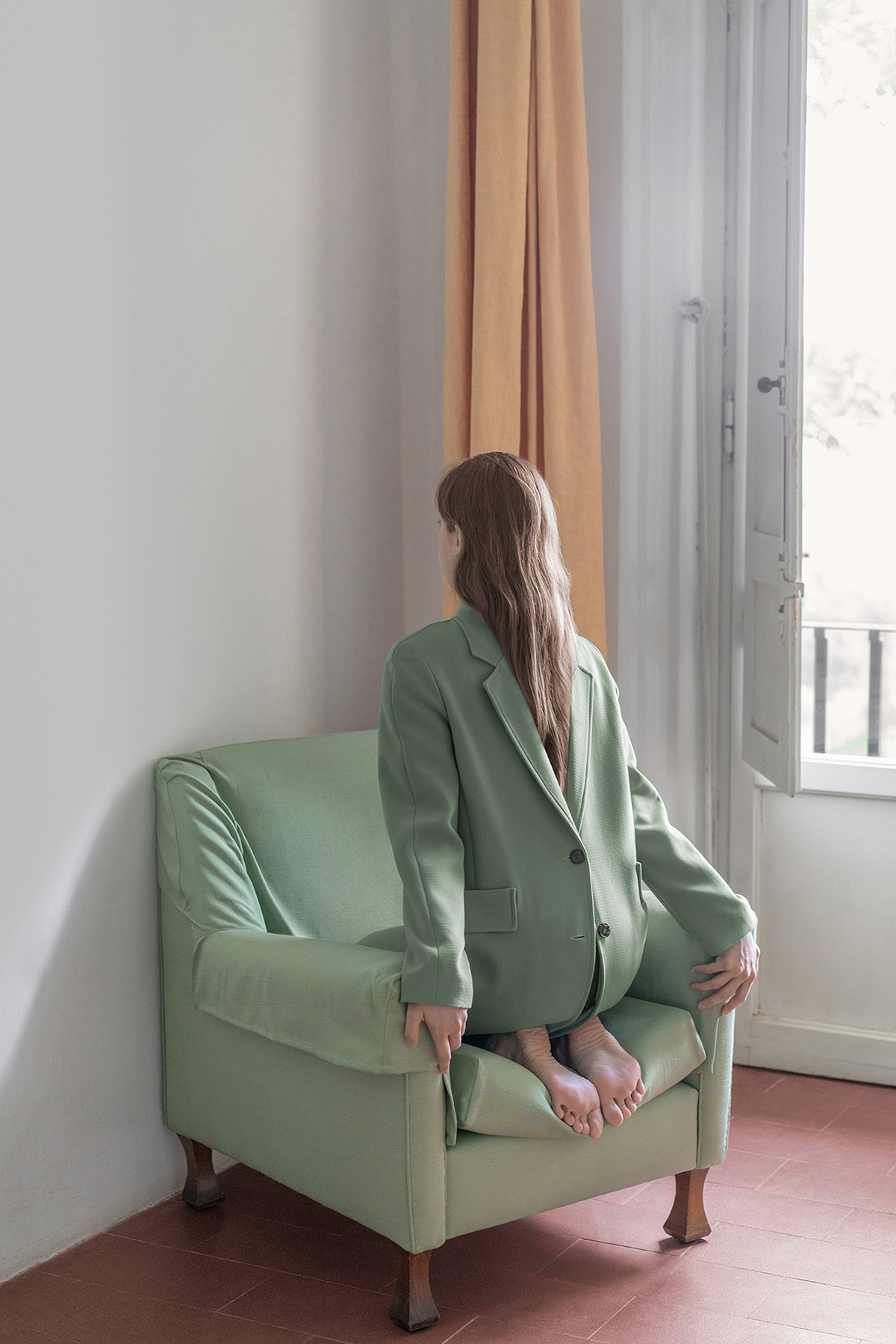 Christopher: Many of the images you make are very funny, and there’s a lot of irony and humor. They’re playful. But sometimes, even though they have these qualities, they can be sad, and there’s a sense of melancholy in a way. Is that your hope when setting out to take a photo, that you want to make the viewer laugh or feel joy, or are you trying to tell a story and how people feel is a byproduct of that?

Brooke: I think there’s something innately playful about what I do that comes through as humor, but I think that can be translated in different ways. A lot of times I’m working very spontaneously. I’ll find a location, and I’ll map out what I’m going to do very quickly. Then other times, it’s more methodical, and I think those tend to be the darker or sad photos. The images where I’ve sat with it and deliberated about what that’s going to look like and say.

There’s a photo of me jumping into a corn field, and that photo is very playful. Making that photo was playful because I literally just went out one day and started jumping in this corn field for an hour and that’s how that was made! It’s a mixture. I don’t think too much about it. I have my versions of what they mean to me, but I think it’s funny when somebody says, “that’s really twisted!” or “that’s really dark!” and that same photo another person sees it and starts laughing. I like that! I like that open story line. Part of what makes it accessible is being able to imagine their version of it. Christopher: Unless there’s a body in motion, your photos often appear incredibly precise, composed, and perfect in a way. How much of what we see is serendipity during the shoot, versus you knowing exactly what you want and preparing ahead of time?

Brooke: There’s not much that’s serendipitous about it other than me stumbling upon the location and perhaps who I happen to be with at that time. A lot of the people I work with are friends, and obviously, I work with myself a lot doing self-portraiture. So there’s nothing really serendipitous about it other than I was walking and I’m like, “Oh my god, I love this location!” Actually, I just made this photo. It’s this bent fence, and somebody is bending their head down? Christopher: Yes, I saw it. I love that shot.

Brooke: I made that photo in Austin about a month ago. I was driving with my friend, and I saw this dent in the fence and thought, “Oh my god, I love that dent!” Every day I dropped her off at work, and I looked at the dent during different times of the day. I thought, “Okay, when is the light going to be better on the dent?” Finally, my friend was like, “Can you stop talking about the dent?” and I said, “No, I love the dent. We have to go back to it!” It was serendipitous in the fact that I found it, and my friend was available to model for it, but other than that the shoot was very calculated. I think a lot about composition, and color is very important to me. I do a lot of manipulation of color in post. That photo of the fence is almost entirely painted with masks that are turning her clothes a certain color and toning the fence a certain color. That’s all very much part of my process, is manipulating reality in that way.

Christopher: Speaking of color, how much of the color in your images is reality versus you going into post and adjust things. You seem to have a very specific palette that you use. Where does that palette come from?

Brooke: I guess it’s a mixture or a culmination of things. It’s absolutely inspired in some way, shape, or form by my grandma. I was just looking at old pictures of her—she’s in a nursing home now—but I was looking at old pictures of her house this morning. I thought, “Oh my god, this place is immaculate.” It had all these really crazy wallpapers, and you’d go into a room and each room was shaped around this one color story. She had one room that was blue with pink accents, but it carried through everything else in the room and feels like its own world. She was really good at this. It was the way that she decorated and lived. It was very curated. A lot of the color choices come from there.

My grandma used a lot of pastels, and over time as I started working with certain colors, I found versions of them that I like. I realized I don’t really like yellow. During different phases, I’ll have a certain shade of each color I use. Or, I’ll adjust the hue based on the available light, but there’s not a specific swatch that I just drop in the image. Though it does change, I’m not married to it. I used to like a crisp blue sky, but now I like a greenish-blue sky, so some of it develops organically. I bookmark things like album artwork that I think has a great palette. I’ll save it and might reference it later for something I’m working on. But the root of it is somewhere in Ohio at my grandma’s house, and from there it was trying different things and seeing what I like. Christopher: How much of your work is client work versus art making right now?

Brooke: Most of it right now is art making, and most years it’s that way, but last year was a busy year for me with jobs. I shot a campaign for a shoe company in Berlin, and I also did a project for mental health awareness with Refinery 29. So I had a few really cool and big projects last year that pulled me away from art, but for the latter part of the year, it was mostly just me making work for me. Which is great. I like doing both. It’s good to have each come in waves.

The jobs actually fuel other creative ideas because they push me to work with more than one model or shoot in a place that I wouldn’t normally shoot. For example, I have this one photo that blew up last year. It’s two men in a chair—with that photo, I don’t know if I would have made it if it wasn’t for the job with the shoe company. They provided a mood board for the project that had bodies overlapping and an optical illusion of two people as one, or maybe it’s only one person and it looks like two. My job was to dial it down to a commercial version of that.

You can find it on my Instagram. It’s just two legs wearing the same shoe, so it looks like one set of legs but one leg is brown and the other is white. I loved that idea, but it was a commercial-looking thing, and I’m not going to put this on my website next to my art, even though I like it. It feels like it’s selling a product. The thought process became “what if I go back into the studio, get two people to come in with me, and recreate my version of that concept?” I don’t know if I would have booked the time in a studio or even made the photo if that initial seed wasn’t planted from getting pulled out of my comfort zone with the job.

The truth is, it’s great to make art for a whole year, but I can use the occasional job because it’s really fun to bounce ideas around. It pushes you to not be in your own head all the time.

Christopher: Because we’re primarily an online publication, I like to ask artists about their relationship with social media, specifically in relationship to your career. I like to ask in relation to artists who are just starting their careers and trying to make it, and seeing both the positive and negative effects of social media on an artist, like the trap of creating work for clicks or destroying one’s esteem because of the lack of “traction.” How do you view your experience? 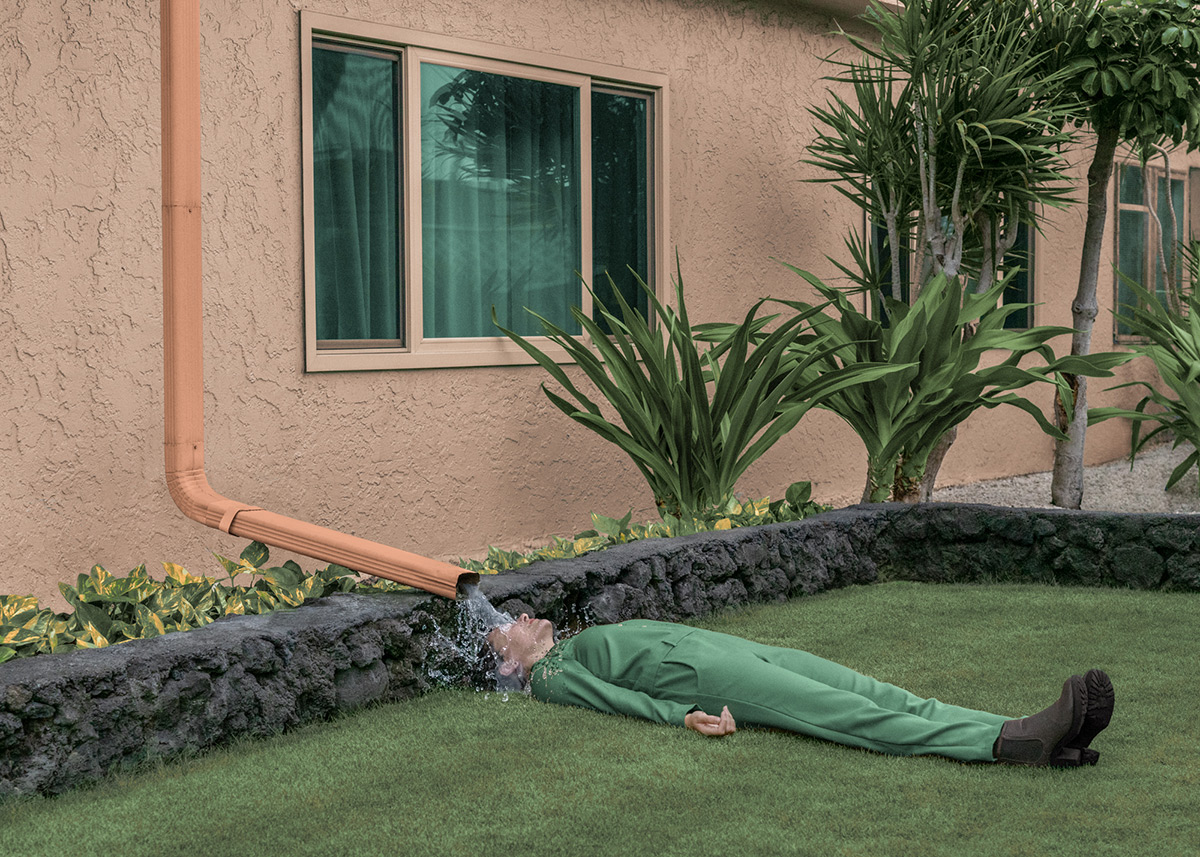 Brooke: In a lot of ways I learned photography on the internet. I studied photojournalism in school, so I had a fundamental introduction to photography. But the fine art stuff and surrealism and anything in between was a discovery on the internet. I used to share my work on Flickr back in 2011, and you would upload a photo and maybe 45 people would see it and three people would comment. Then I would write this little synopsis of my day [ to post under the photo ] and, maybe it was just an illusion, but it felt like a real community. But Instagram took that and created a commercial or a mainstream version of that. Flickr was one of those things where if you’re in the art world or the photo world, you might have heard of it. My dad doesn’t know what Flickr is, but he knows what Instagram is.

In a lot of ways that’s great, so you have people developing visual literacy from Instagram. They care what their feeds look like. They understand when something is good, and I think there’s an appreciation for art through Instagram that I really love. I’ve found so many artists through Instagram that I didn’t even know existed, even a year ago. In that way, I think it’s really enriching. It can totally broaden your world. For instance, I was in Ohio making work, and nobody was watching and there was this pressure to move to New York to make this work and get people’s attention. I think that’s great and still can be true in a lot of ways, but I think Instagram has leveled the playing field in that way, which is a very positive thing.

But on the negative, I could imagine it could be overwhelming to be exposed to all this great work just starting out. I always tried to keep blinders on when I first started off in photography. I would listen to a lot of music and look at a lot of painting and other mediums, but I don’t stalk a lot of photographers because I felt like that was a good way to fall into copying or not necessarily telling your own story.

You can find more from the photographer on Instagram.