In 'Turn Off the Plastic Tap,' Three Tons of Waste Pour From a Spigot Floating 30 Feet Above Ground Last week, representatives from 175 nations formally agreed to curb plastic pollution in a momentous move. Plastic has become an increasingly urgent part of the climate crisis, and recent estimates approximate that the total amount of the material produced throughout history exceeds the combined weight of all animals on land and sea. Each year, we collectively generate 300 million tons more waste from single-use containers and similar products, a staggering number in comparison to the 9 percent we’ve recycled and a testament to the harsh reality that the planet is engulfed with plastic.

To coincide with the United Nations Environment Assembly meeting, photographer and artist Benjamin Von Wong (previously) erected a towering, 30-foot installation outside U.N. headquarters in Kenya. With the help of the Human Needs Project, an NGO providing basic services to slums around the world, Vong Wong collaborated with more than 100 residents of the large, poverty-stricken region of Nairobi known as Kibera. Together, they gathered, sanitized, and strung up three tons of water bottles, condiment containers, and other unwanted items that were then suspended from the oversized silver spigot.

Although it shows a minuscule portion of the waste produced worldwide, the resulting installation, titled “Turn Off the Plastic Tap,” is a powerful indictment of consumerism and the lack of environmental protections. “Too much of the plastic conversation revolves around recycling and cleanups, but those only deal with the consequences, and not the root cause,” Von Wong writes. “The real solution and opportunity is getting plastic production back under control by making sure we turn off the plastic tap.”

Watch the video below and check out Von Wong’s Instagram to see how the massive spout was constructed—thanks to a Web 3.0 community called the Degenerate Trash Pandas, which funded the installation, an additional $100,000 was raised for charity, as well—and find more of his projects concerned with plastic waste, like this installation of 168,000 straws, on his site. 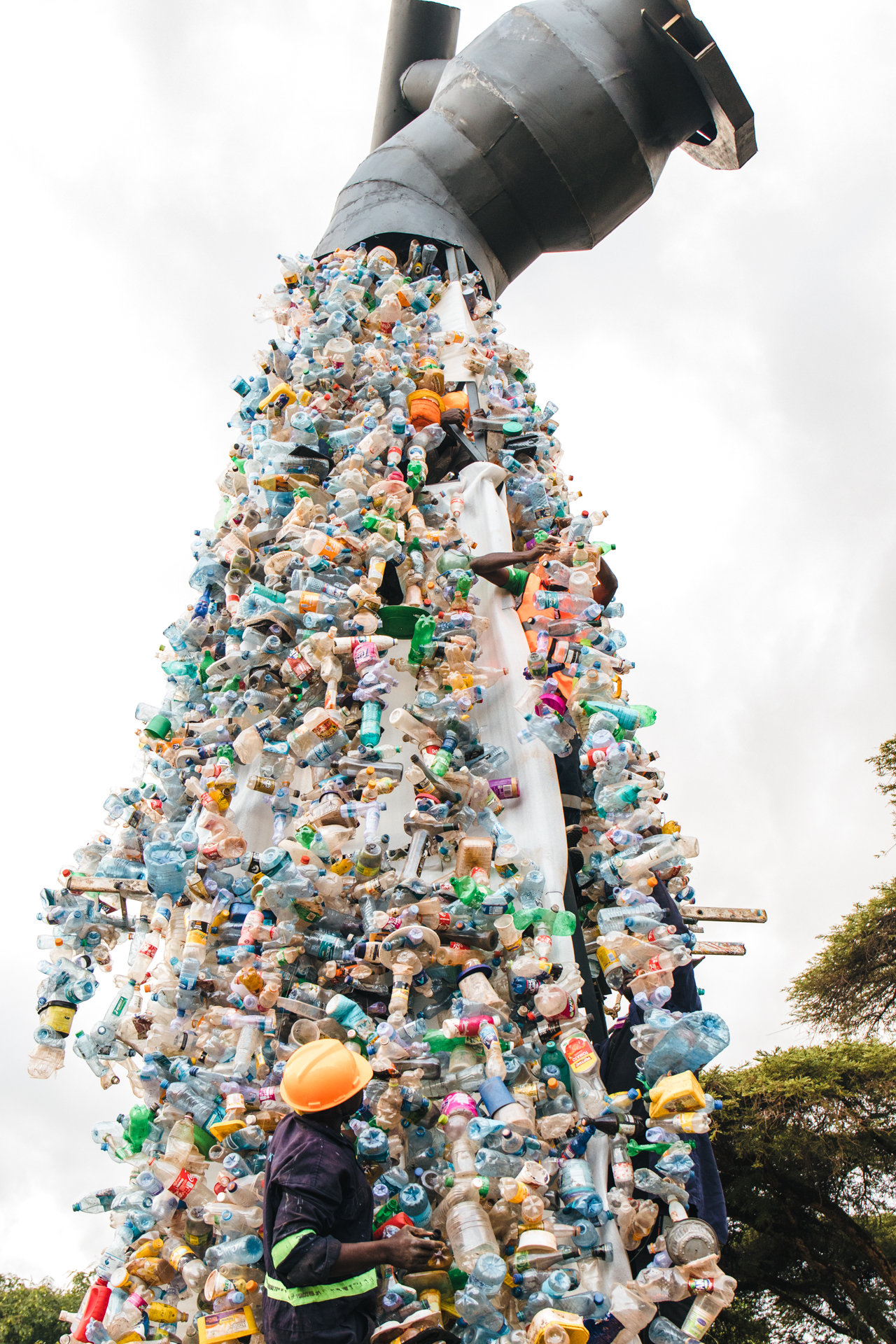 Shot in 8K against a black backdrop, the video documents a chemical dropped into hot water and then subsequently cooled. The plunge in temperature causes the substance to become unstable, activating crystallization and sending fringed spikes of ice splaying outward from a central point. Similar to his previous projects—watch more of Blanchard’s works on Vimeo and Instagram— “Bellatrix” is an abstract and illuminating consideration of nature’s unruly and incredibly meticulous processes. The miniature woolen oven mitt that Andrea Love (previously) uses to pull her handmade pizza from the oven is the only item in her stop-motion tutorial that’s true to form. An addition to the Washington-based animator’s quirky fare, the short film shows a flattened crust whirling in the air before landing on the tabletop and being topped with fiber-rich ingredients like spools of sauce, mushrooms, black olives, and cheese produced from diced yarn. Dive into Love’s world of felt-fueled cooking above, and watch her making-of video to go behind the scenes of her fleece kitchen. (via The Kids Should See This) “In traditional Chinese culture, the moon is a carrier of human emotions,” writes artist Yuge Zhou. “The full moon symbolizes family reunion.” This belief grounds Zhou’s meditative series of landscape drawings that etch wide, circular patterns in the beach along Lake Michigan and in snowy parking lots near her apartment.

The Chicago-based artist postponed a visit with her family in Beijing back in 2020 and has since channeled her longing to return into her ritualistic performances. Filming aerially at dawn, Zhou traces the patterns left by the moon with her suitcase and allows the glow of nearby light poles to illuminate the concentric markings. Stills from the videos appear more like dreamy renderings than footage, an aesthetic choice that corresponds with their allegorical roots in the Han dynasty legend, “The lake reflecting the divine moon,” about the universality of longing.

Having created five works in summer and winter, Zhou likens the pieces to “mantras suspended in a time of waiting.” Until she’s able to return to China, she plans to add more drawings to her collection and continue “bringing the moon down to me on the earth.” For more of the artist’s multi-media works, visit her site and Vimeo.