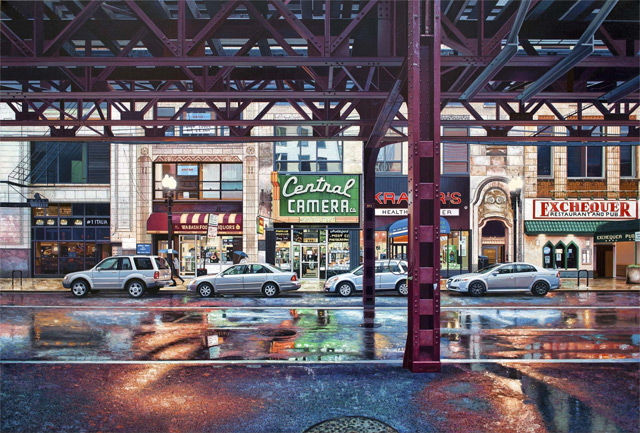 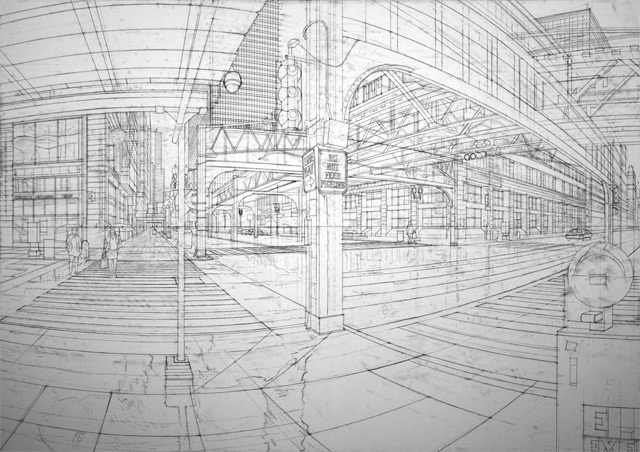 Many painters working from photographic source material employ a wide variety of techniques to arrive at a final image. This will involve anything from loose sketching beforehand to complex grids, where a photograph is translated into paint box by box. Such is not the case with British painter Nathan Walsh who instead relies on elaborate drawings reminiscent of architectural blueprints before every committing paint to canvas. This deep reverence for the underpinning geometry and perspective gives each work a sense of life that might otherwise not be present in something created with the mechanical aid of a camera or software.

Walsh tells me his primary source materials are not photographs but pencil sketches drawn on-site, for example the Chicago pieces above began from over 100 drawings he then references in his studio. In this way he can easily alter the position and size of any particular element, a process he likens to “building a world from scratch”. Personally I think the process is more akin to building the entire world in his mind so he can better represent it later in his paintings, each of which takes up to 3-4 months to complete. Via his website:

I deal exclusively with the urban landscape and aim to present a painted world which in some ways resembles the world we live in. I am fascinated by the city, it’s visual complexity and constant state of flux. The act of painting is an attempt fix this information and give vision to our experience of living within it. […] The work aims to create credible and convincing space which whilst making reference to our world displays it’s own distinct logic. This space is created through drawing, which I see as fundamental in establishing a world the viewer can engage with. Drawing allows me to make human pictorial decisions instead of relying on the mechanical eye of a camera or software package. This process is open ended and changes from one painting to the next. Whilst I employ a variety of perspectival strategies, these methods are not fixed or rigid in their application. Working with a box of pencils and an eraser I will start by establishing an horizon line on which I will place vanishing points to construct simple linear shapes which become subdivided into more complex arrangements.

You can see numerous final works at a much higher resolution, as well as initial drawings over on his website. Walsh will have work at the Changing Perspectives technology conference in Paris later this month, and is working on a solo show at Bernarducci Meisel Gallery in November.