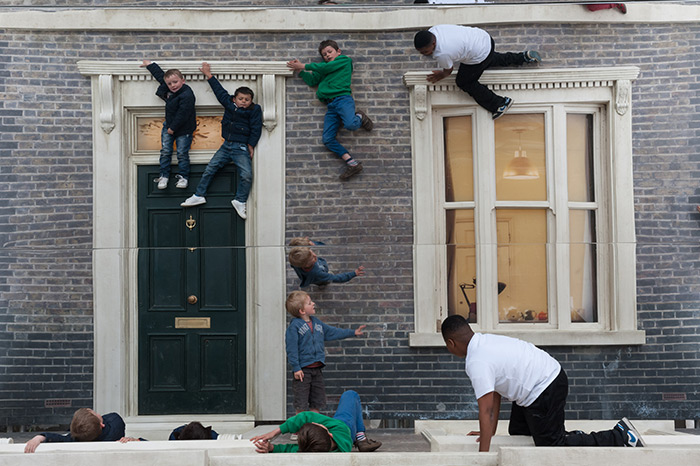 Want to pretend you’re Spiderman but can’t afford the suit and the genetic mutation? Argentine artist Leandro Erlich was commissioned by the Barbican in London to install a version of his wildly popular optical illusion that creates the visual effect of instant weightlessness. Using a wall of giant mirrors propped against a huge horizontal print of a Victorian terraced house, visitors are free to climb and jump around as their reflections appear to move freely without the pesky effects of gravity. Titled Dalston House the piece was erected in Hackney just off Dalston Junction on a disused lot that has remained vacant since it was bombed during the Second World War.

The installation opens today and is free to all visitors and will remain up through August 4th. Erlich will also be giving a talk tomorrow starting at 7:30pm. All images courtesy the Barbican. (via visual news)

‘The Weaving Project’ Invites Visitors to Climb Inside a Massive Installation Formed From Nearly 10,000 Feet of Rope