Four years ago, Booooooom creator Jeff Hamada asked the internet to join in on an art challenge to recreate their favorite old master paintings as contemporary photographs. The Remake Project sparked many professional and amateur artists to create elaborate sets, paint their bodies, paint their friends’ bodies, and take their own shot at works by artists from Dali to Magritte. This collection of original paintings and their contemporary counterparts has now taken the form of a book released through Chronicle Books titled Remake: Master Works of Art Reimagined.

The book features side-by-side page layouts of a selection of works from the original contest, displaying the photographic re-interpretations next to their old-world inspiration. Photographs range from the strikingly similar to loose interpretations, a grand spectrum of re-creations represented from the project’s open call. Ramon Casas i Carbo, “After the Ball,” 1895, oil on canvas, remake by Tania Brassesco and Lazlo Passi Norberto 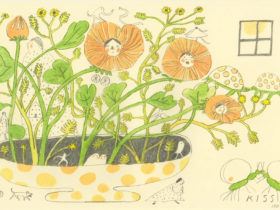