Last year, researchers released records from nearly two years of analysis of Johannes Vermeer’s most-recognized artwork, “Girl With a Pearl Earring.” While their findings didn’t include the subject’s highly sought-after identity, they did reveal that the gray backdrop is actually a dark green curtain and that the figure has eyelashes only visible with magnification. Thanks to Emilien Leonhardt and Vincent Sabatier, of Hirox Europe, we all can study the intricacies of Vermeer’s elusive work and peer directly into the paint cracks with an interactive 10-billion pixel panorama.

The duo began the undertaking to determine the surface condition of the iconic piece after multiple restorations, measure the space between the fractured pigments, and elucidate the artist’s technique. Using a custom microscope, Leonhardt and Sabatier took 9,100 photographs of the painting that were then woven together into the massive panorama. It reveals particulars down to 4.4-microns per pixel.

Head to Hirox Europe’s site to explore the incredible intricacies of “Girl With a Pearl Earring” in both 2- and 3-D, and watch the video above for details into the technical aspects of capturing minuscule details. (via Peta Pixel) 60,000 Bees Recreate the Nefertiti Bust and Other Classic Sculptures in Wax with Artist Tomáš Libertíny Tomáš Libertíny prefers to collaborate when recreating iconic busts and sculptures, although his chosen partners don’t join him in the studio. The Slovakia-born artist tasks tens of thousands of bees with forming the porous outer layers of classic artworks like the “Nefertiti Bust,” Michelangelo’s “Brutus,” and a large jug based on the “Nolan amphora” at The Met.

Encased in honeycomb, the resulting sculptures generate a dialogue between the newly produced organic material and art historical subject matter. Libertíny’s “Eternity,” for example, is based on a 3D model of the original portrait of Nefertiti and is “a testament to the strength and timelessness of the ‘mother nature’ as well as its ancient character as a powerful female reigning against the odds.” Similarly, the artist’s “Brutus” rests on a Coca Cola crate, a reference to Marcel Duchamp’s readymades, although his iteration diverges from the original as it questions “the fragility of fate and finding salvation” in modern times. Currently based in Rotterdam, Libertíny provides professional beekeepers with a frame that the insects then colonize during the course of months and in the case of “Eternity,” two years. “I have to guide the building growth like you would with a bonsai, slowly string(ing) the workflow into places where you deem ideal,” he says. “The final result is always a surprise as it is not something you can completely predict like would with traditional craft techniques. It happens that I have to look at the finished piece for a couple of days in order to appreciate it fully.”

Beeswax as a material is inherently contradictory, the artist notes, because of its simultaneous ephemerality and durability—Libertíny’s sculptures have the potential to remain intact for thousands of years if maintained properly—a duality he’s been exploring since he began the Made by Bees series in 2005. “A beeswax candle is for me the best example of pure design. Absolutely nothing is styled about it. Everything about is a science of keeping the flame burning,” he says, explaining that the candle served as a catalyst for the ongoing series.

If you’re in Amsterdam, “Eternity” is currently on view as part of Libertíny’s solo show at Rademakers Gallery through January 30. Otherwise, follow the artist’s sculptures that explore contradiction and ephemerality on Instagram. For a similarly collaborative project, check out Ava Roth’s honeycomb-encased works. (via designboom) 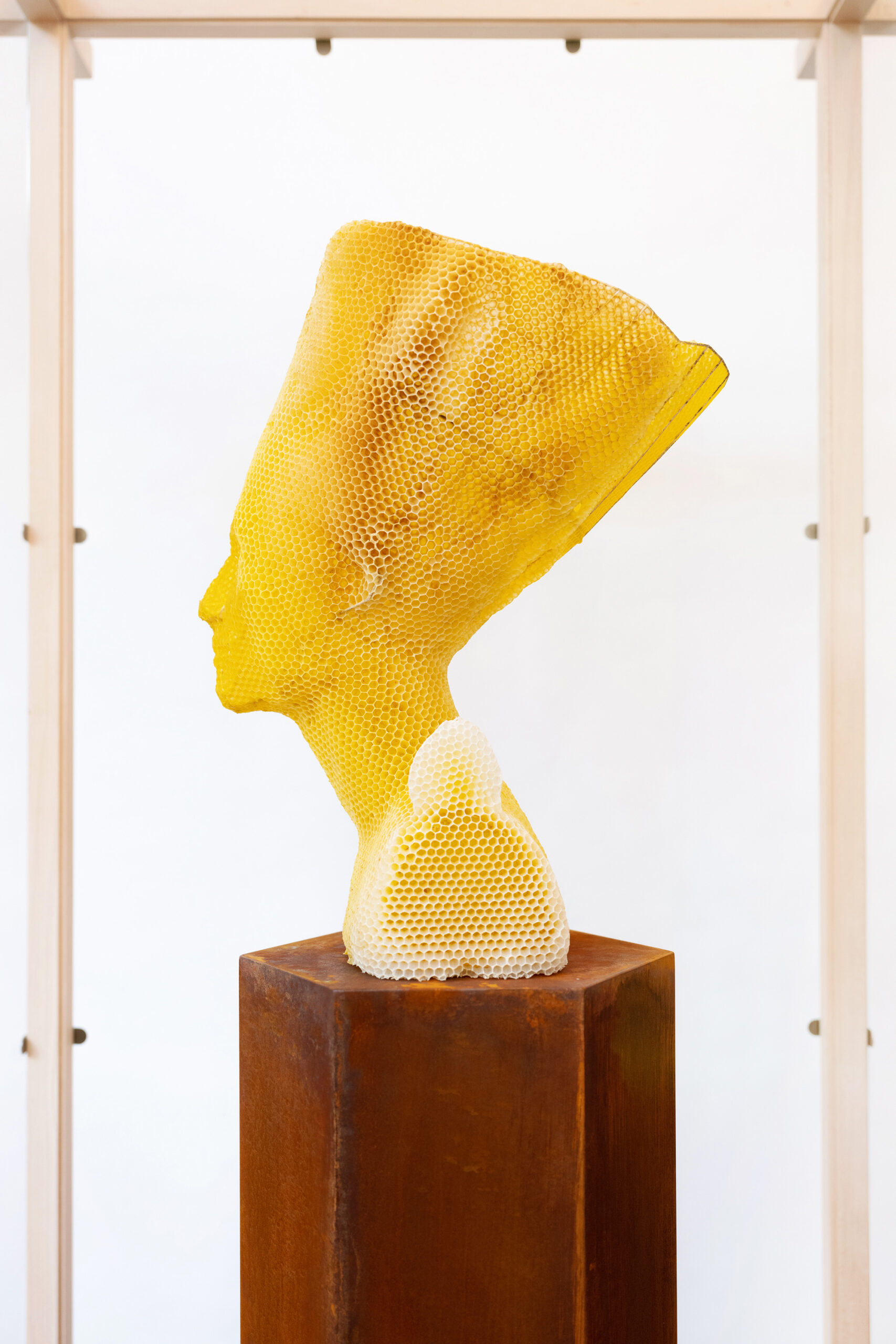 Most people probably would prefer that their acquaintances’ socks stay firmly tucked in their shoes, but a glimpse at one of Curator’s pairs might be an exception. The Portugal-based company designs cotton garments printed with variations of iconic artworks or designs constructed from their familiar color palettes—think Pieter Bruegel’s “Tower of Babel,” Gustav Klimt’s “The Kiss,” and Johannes Vermeer’s “Girl with a Pearl Earring.” Check out the full collection and pick up a pair on Curator’s site, and follow the latest designs on Instagram.