It’s been well over a year since we last checked in with Australian photographer Steve Axford (previously here and here) who ventures into forested areas near his home in New South Wales to photograph the unusual forms of fungi, slime molds, and lichens he finds growing there. The permutations in color, shape, and size found in each specimen are a testament to the radical diversity of living creatures found in just a small area.

A handful of the images seen here, namely the “hairy” fungi called Cookeina Tricholoma, were photographed last year on a trip to Xishuangbanna, China and Chiang Mai, Thailand. Axford suspects that some of the species he encounters may be unknown to science and that he may have documented them for the first time. You can see more mushroom goodness on Axford’s Facebook and Flickr pages. 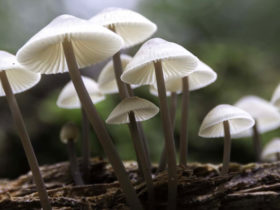