Argentinian director Juan Pablo Zaramella (previously) has shared the trailer for a cute new stop-motion television series featuring typically inanimate objects living out funny scenarios. With a title that translates in English to “The Way Things Are,” each episode in the series is one minute long and appears to focus on a different subject, from an egg catching a carton bus, to a stick of dynamite visiting a psychologist who also happens to be a pair of scissors. The sound effects and voices add to the humor. Though you’d need to know Spanish to understand the exact words, Zaramella’s scenes are universally comprehensible: a toothpaste man protests a blushing toothbrush bride’s vows, while  a roll of toilet paper demands access to an occupied bathroom.

The project won Zaramella the Audience Award at the Big Cartoon Festival 2018 and took 2nd prize at the Cyber Sousa / Xiamen International Animation Festival. His previous TV series, The Tiniest Man in World, blended stop-motion animation with live-action and is currently only available to watch if you live in Argentina. There is no word yet on when or where audiences can see Así son las cosas in full, but the two-minute trailer above is a great sample of what’s to come. It also shows the amount of time and detail that went into capturing every frame in order to tell the silly short stories. You can watch more of Zaramella’s films on Vimeo. 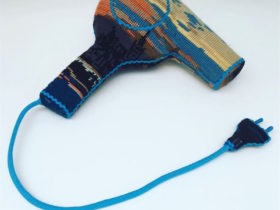