First Look at ‘Numina’: A Wonderland Brimming with Bizarre Creatures and Fantastical Scenes Opens at ‘Convergence Station’ in Denver

Between a two-story metallic spaceship, gnarled trees teeming with strangely colored mosses and lichen, and fantastical creatures, the eccentric artworks that comprise the new space at Convergence Station by Meow Wolf (previously) rival those in even the most peculiar sci-fi universe. The immersive, swamp-like installation, which is dubbed “Numina” or the spirit of a place, is one of the anchors of the Santa Fe-based company’s latest undertaking, which showcases more than 70 installations by 300 artists across four floors. Four years in the making, Convergence Station opens on September 17 in Denver.

Accessible through a series of secret portals and wormholes, “Numina” scales 35 feet into the air and is designed as a multi-sensory experience inviting visitors to interact with their unearthly surroundings. When someone speaks to one of the four glowing creatures resembling sea urchins, for example, the forms warp and spew the echoed audio across the space. The color-changing “Fairie Orbs” similarly sing and vibrate with intonations when a person passes by, and the “Frog Egg Garden” emits kaleidoscopic lights and quiet sounds when activated with touch. Spanning three levels, the extraordinary, hand-built project is evidence of the team’s penchant for detail and ability to fuse seemingly disparate reference materials into surreal sculptures with various colors, textures, and shapes. The wood-like structural elements, for example, are wrapped in innumerable folds that artists modeled after the wrinkled skin of hairless cats, while pieces like the “Toad Piggies” are hybrid creations and the “Nudibranches” exaggerate the striking bodies of real-life mollusks by stretching them to seven feet. “Some ‘flowers’ were inspired by jellyfish, and some ‘jellyfish’ look more like flowers,” says Caity Kennedy, the project’s creative director and co-founder of Meow Wolf.

Although individual artists retained control over much of what they created—the expansiveness of this collaborative approach is part of what makes “Numina” so uniquely vast and diverse—Kennedy tells Colossal that she gravitated toward the more bizarre works rather than whimsical, fairytale-style pieces. “It is an interesting challenge to play with the balance of comfort and discomfort, to build a space that is welcoming but sometimes unnerving, to make people feel both safe and adventurous at the same time,” she shares. “There are so many things I could point out… Look for the sundial! Find the zoetrope! Point the sort of mollusk orchid/telescope creatures at the stars! Find Leomie’s Field Notebook in the library!”

Tickets are on sale now to visit Convergence Station in person. Otherwise, watch the video tour above for a more in-depth look at the unreal wonderland. 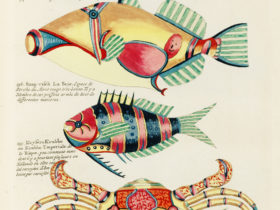