In a Remote Swedish Forest, A Nest of Branches and Hay Encircles a Tree with a Cozy Hideout In April of this year, Swedish architect and artist Ulf Mejergren and Finnish artist Antti Laitinen gathered fallen branches from a forested area outside of Nykvarn, a small city southwest of Stockholm. The duo used those wooden scraps to weave a structure around a tree, building a cozy refuge among the thawing spring landscape.

That construction was the first part of an ongoing project titled One Tree Four Seasons, in which the artists gather natural materials from the surrounding area to create site-specific land art. Summer saw the inclusion of hay from a nearby field that insulated the walls and floor and created seating inside the enclosure, while the lush treetop served as roofing. In fall, those same leaves wrapped the facade in an upward swell and piled into a colorful path that led into the structure’s round opening.

Mejergren tells Colossal that the fourth and final iteration is slated for completion in December, although that, of course, depends on the weather. Keep an eye on his and Laitinen’s Instagrams for updates. (via This Isn’t Happiness) 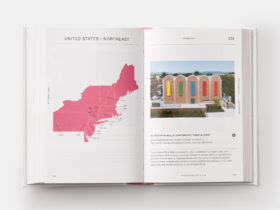 Destination Art: A New Guide Looks at 500 Permanent Art Installations to Visit Around the World