For four decades, Nancy Floyd has fostered a routine around confronting aging directly. Every day since 1982, the Oregon-based photographer has taken a portrait of herself perched on a chair in her living room, standing on the front porch, or posing wherever she’s spending the day for her series, Weathering Time. A forthcoming volume published by Gost compiles thousands of these images in a visceral rumination on what changes as we age.

Each black-and-white photograph frames a posed Floyd, who continually exudes a calm, laid-back temperament, and chronicles the way time impacts her body, relationships, and environment, honing in on her experience as a woman in the United States. Although the images are profoundly intimate and personal—many show her pets, stints in hospitals, and her parents aging—they simultaneously broach the universal. Floyd devotes an entire section to the “Evolution of the Typewriter,” and the project creates a broad visual timeline of advancements in technologies, fashion trends, and larger cultural shifts.

At the moment, the series is comprised of more than 2,500 photographs, 1,200 of which are laid out in simple grids in the 257-page volume. Floyd used a film camera for the first 36 years of the project, a choice that allowed her to take a blank image when she was unable to photograph herself, and only switched to digital last year.

Weathering Time is available for pre-order on Bookshop, and you can find more shots from the expansive collection on Floyd’s Instagram. Artist Sarah Sze explores the myriad conceptions of time and space through a tremendous, new spherical sculpture. Titled “Shorter than the Day” —a reference to Emily Dickinson’s poem “Because I could not stop for Death,” which considers the comfort found in life’s finality—Sze’s piece weighs five tons and was unveiled Thursday at LaGuardia Airport. It is suspended above an atrium in Terminal B.

The New York-based artist captures the magnitude of the upper atmosphere as it changes from bright blue morning to a vibrant sunset to the rich hues of the night through nearly 1,000 photographs of the sky. Each printed image is fastened to the aluminum and steel with alligator clips and is revealed as viewers move around the massive work, just like the earth circles the sun to mark a day. The piece was fabricated in collaboration with Amuneal.

Along with three other projects from artists Jeppe Hein, Laura Owens, Sabine Hornig, “Shorter than the Day” was commissioned by LaGuardia Gateway Partners and Public Art Fund. To find out more about Sze, whose work involves countless individual objects positioned in precise arrangements, watch her TED Talk and visit her site. (via ArtNet) 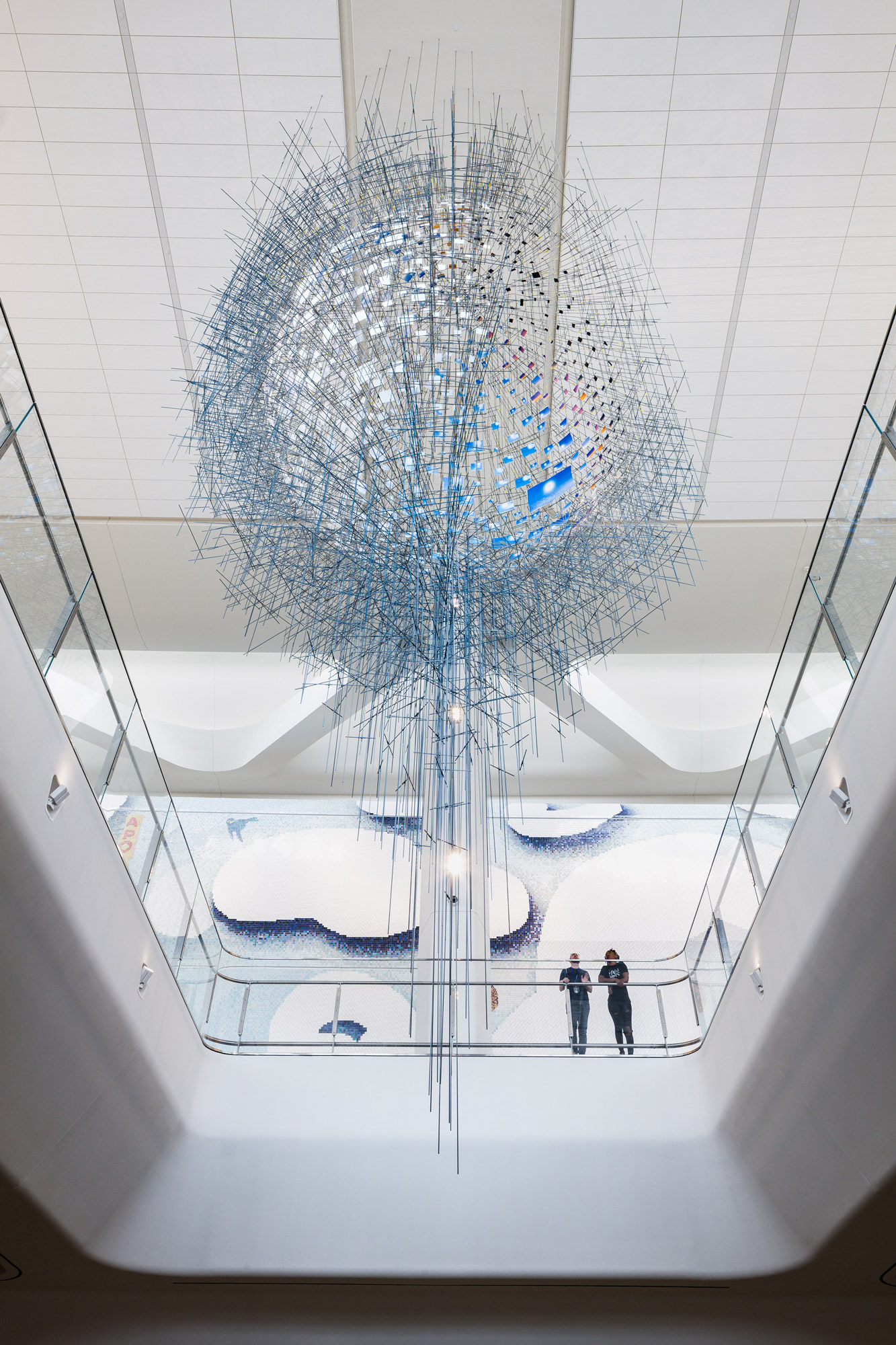 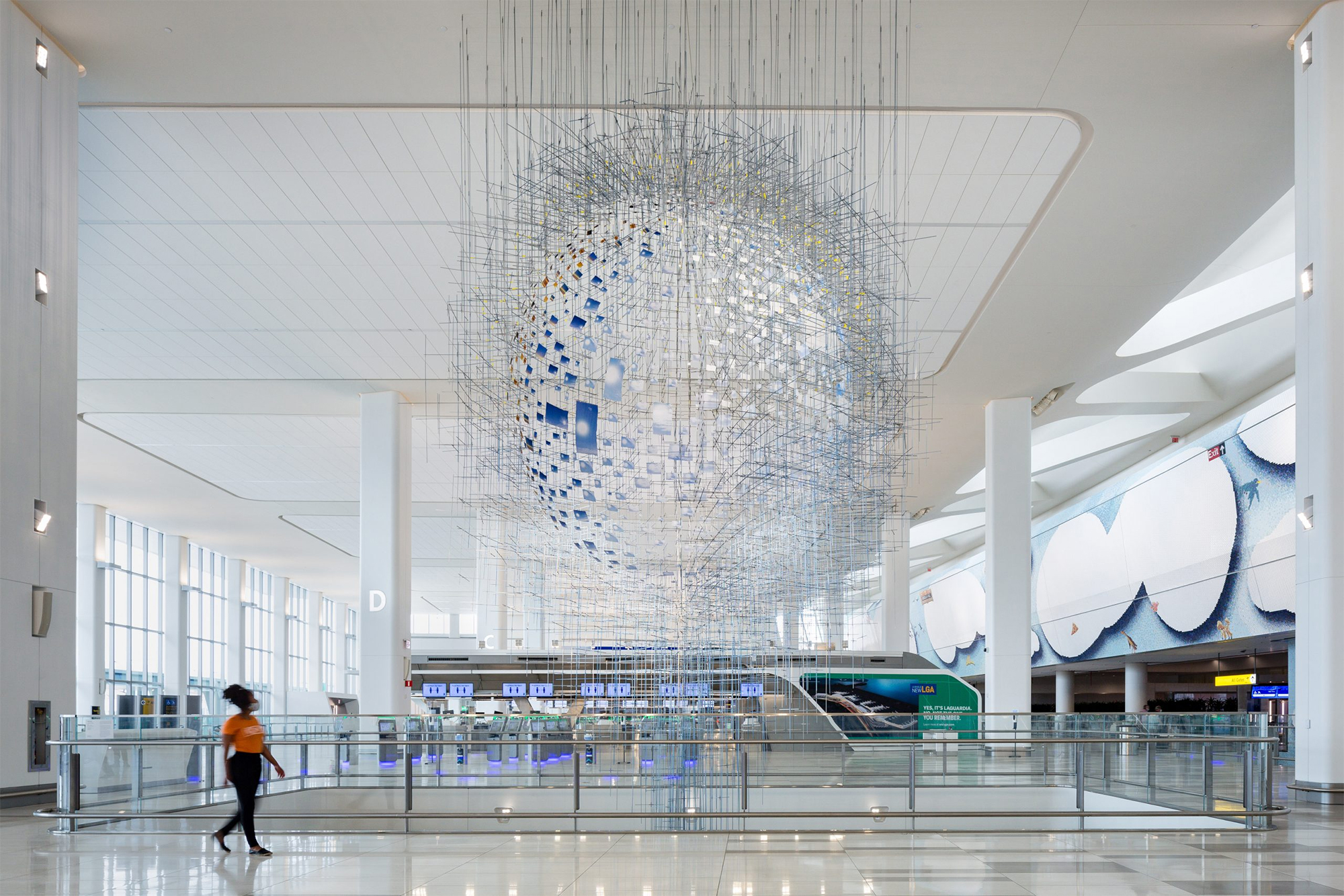 One-hundred five hourglasses dangle from the entranceway ceiling at cSPACE King Edward in Calgary. Every day at both noon and midnight, the sand-filled vessels flip in tandem and reset. They’re part of a 2018 project called “Yesterday, Today, Tomorrow,” a site-specific installation created by artists Lane Shordee, Caitlind r.c. Brown, and Wayne Garrett (previously), that visualizes the intricacies of how we experience collective moments, individual memories, and history.

Each hourglass has a unique correlation to time–half document how hours slip by like a clock, while others reflect more personal relationships to the passing seconds in a series of notes submitted by the public. “Ranging from ‘the time it takes to call mom’ to ‘the time it takes to realize it was just a dream and you are no longer lying next to me,’ you can read the brass tags attached to various hourglasses to understand the increment of time being measured in sand,” the artists tell Colossal.

Every vessel, though, represents a year of the King Edward building, from its construction in 1912 to its transformation to the cSPACE area in 2017. “‘Yesterday, Today, Tomorrow’ uses the hourglass as a symbol of non-linear time–both mortal and immortal–drawing a relationship between the sandstone school’s past, transitional present, and the uncertain future yet to come,” they said. Visualizing the otherwise abstract concept, the suspended project invites people to consider how all moments are interwoven.

For the project, the creative trio ground the sandstone bricks from the original building. They then sifted and measured the substance into the hand-blown glasses that measure zero seconds to four hours. Motors, sensors, microcomputers, and an internal clock using GPS ensures that each vessel flips on time even if there’s a power outage.

To keep up with Shordee, Brown, and cSPACE King Edward, head to Instagram. You also might like Brown and Garrett’s interactive lightbulb sculpture and Carbon Copy, their installation that flipped a car on its front bumper In an effort to merge the past, present, and future in a single work, Tokyo-based French architect and designer Emmanuelle Moureaux (previously) hung 168,000 paper numbers in rainbow-like rows to create her latest piece, “Slices of Time.” The suspended project contains 100 hues, in addition to white, that are formed into a vibrant cylinder meant to serve as a visual representation of Earth. “She uses colours as three-dimensional elements, like layers, in order to create spaces, not as a finishing touch applied on surfaces. Handling colours as a medium to compose space, her wish is to give emotion through colours with her creations, which range from art, design to architecture,” a statement about the work said.

Part of her 100 Colors series, the piece is on view at NOW Gallery in London through April 19, although the space currently is closed due to the ongoing threat of coronavirus. To keep up with Moureaux’s next numerical project, follow her on Instagram. (via design boom) Global metropolises known for their 24/7 energy glimmer around the clock in captivating time slice videos by Dan Marker-Moore. The skylines of Los Angeles, Kowloon, London, and Shanghai move through dawn, daytime, and dusk in precise slivers that capture specific moments of natural and man-made light. In an interview with Adorama, the photographer explains that he usually uses between 20 and 40 unique images to strike a balance between providing noticeable visual shifts and containing the busyness. The resulting images convey the endless motion of city life while also forming unusual geometric shapes that center around specific architectural details like LA’s Griffith Observatory or London’s Big Ben clocktower.

Marker-Moore, who is based in Los Angeles, works as a photographer, cinematographer, producer, and director. In addition to his vast trove of personal and editorial projects, he also has a decade of experience in animation and motion graphics for commercials. Marker-Moore is passionate about the technical aspects of still and moving images, and shares extensive notes on his blog and Lightroom tutorials on YouTube. You can see more from Marker-Moore on Instagram, and also check out his worldwide pay phone documention.