Photos of Japanese Playground Equipment at Night by Kito Fujio In 2005 Kito Fujio quit his job as an office worker and became a freelance photographer. And for the last 12 years he’s been exploring various overlooked pockets of Japan like the rooftops of department stores, which typically have games and rides to entertain children while their parents are shopping. More recently, he’s taken notice of the many interesting cement-molded play equipment that dots playgrounds around Japan.

The sculptural, cement-molded play equipment is often modeled after animals that children would be familiar with. But they also take on the form of robots, abstract geometric forms and sometimes even household appliances. Fujio’s process is not entirely clear, but it appears he visits the parks at night and lights up the equipment from the inside, but also from the outside, which often creates an ominous feel to the harmless equipment. 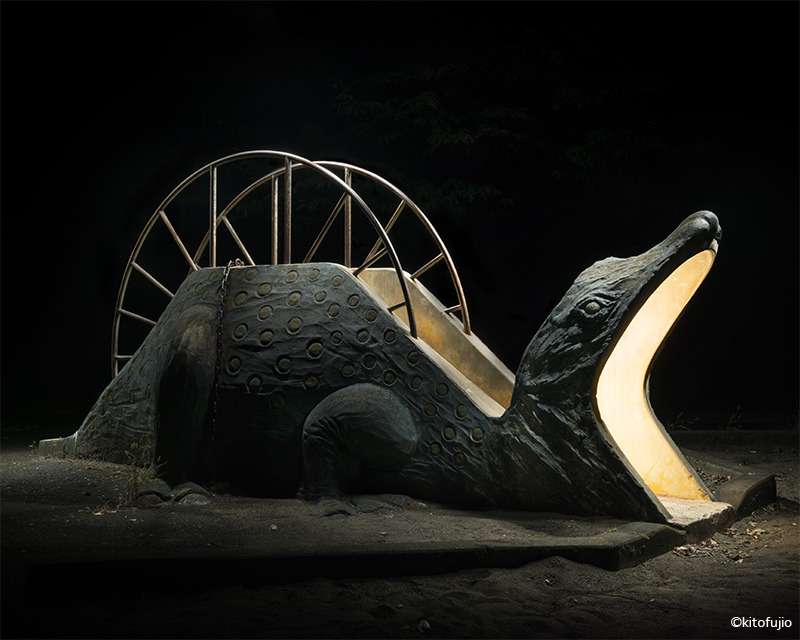 Speaking of harmless, the nostalgic cement molds have been ubiquitous throughout Japan and, for the most part, free of safety concerns. That’s because the cement requires almost no maintenance; maybe just a fresh coat of paint every few years. The telephone (pictured below) is evidence of how long ago the equipment was probably made.

The sculptural cement equipment was a style favored by Isamu Noguchi, who designed his first landscape for children in 1933. Many of his sculptural playground equipment can be found in Sapporo but also stateside at Piedmont Park in Atlanta. Fujio has made his photographs available as part of a series of photobooks (each priced at 800 yen) that he sells on his website. (Syndicated from Spoon & Tamago)