Floor-to-ceiling bookshelves are lovely, and can act as a robust focal point in any home, though accessing the high shelves can be a problem. The common sidekick has always been ladders which can also add character and charm, but for smaller homes like in Japan they can be a nuisance, occupying too much space for not enough usage. Japanese architect Shinsuke Fujii came up with a simple, yet brilliant solution that solves another problem too: earthquake safety. The “House in Shinyoshida,” as it’s called, named for the neighborhood in Yokohama where it stands, was conceived shortly after the 2011 Tohoku Earthquake. The client, who happened to be an avid book lover, approached Fujii with the task to design a home around a large bookshelf that’s both easily accessible but also one that won’t spill all the books if there’s ever a tremor.

The solution was to slant the entire western-facing façade and create a built-in slanted bookshelf whose shelves also function as a ladder. The slant allows family members of all ages to climb up and reach books, but also keeps the books from falling should an earthquake ever shake the home. The slanted façade also has the effect of creating an open feeling in the family room, where the home’s high perch allows for plenty of sunlight to enter through the large windows. (Syndicated from Spoon & Tamago) 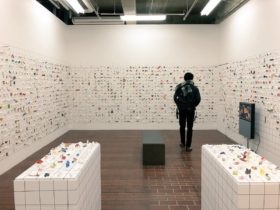