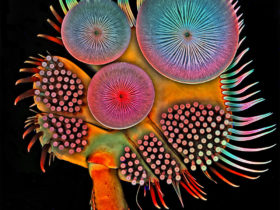 Mother Earth and Her Daughter Meet in a Mural by Jess X. Snow