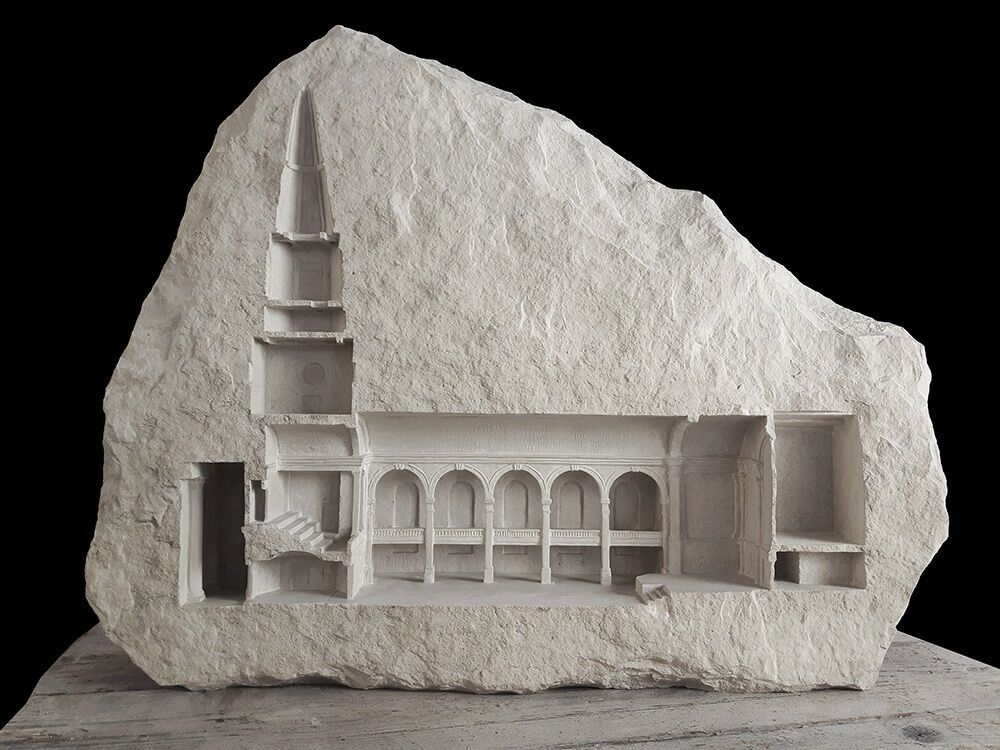 Copenhagen-based artist Matthew Simmonds (previously) carves miniature architectural interiors, angular shapes, and tiny windows filled with symbolic objects, trinkets, and animals. His ghostly white sculptural forms are cut from and presented within raw stone, which allows for a striking contrast between his designs and the medium’s natural surface.

Although Simmonds mainly focuses on sacred architecture, particularly from the Medieval era, he is drawn to how cultures overlap and influence each other. His work often references a variety of architectural styles in one piece, and sometimes presents abstract forms. “I get inspired by real architectural spaces, but the works are not reproductions of actual buildings in miniature, with the exception of the Elevation series,” Simmonds tells Colossal.

His sculptures take a minimum of three weeks to complete, however they can span several months depending on the complexity and size. “The longest I’ve ever worked on a single piece of stone was when I made Windows in 2017,” explains Simmonds. “There was around 180 days, or nine months, of carving time with more time spent on research and design.”

This particular piece was one of his most complex to date. Rows of carved openings collectively served as a curio cabinet, with each window filled with a range of creations, from a miniature iguana and array of small fruits to even tinier models of buildings and structures. Here Simmonds showcases the world in miniature, seen through the visual symbols of a variety of cultures. In the piece are also several references to San Francisco, as it was specifically created for a show in the Bay Area. To view more of the artist’s recent stone carvings, visit his website.