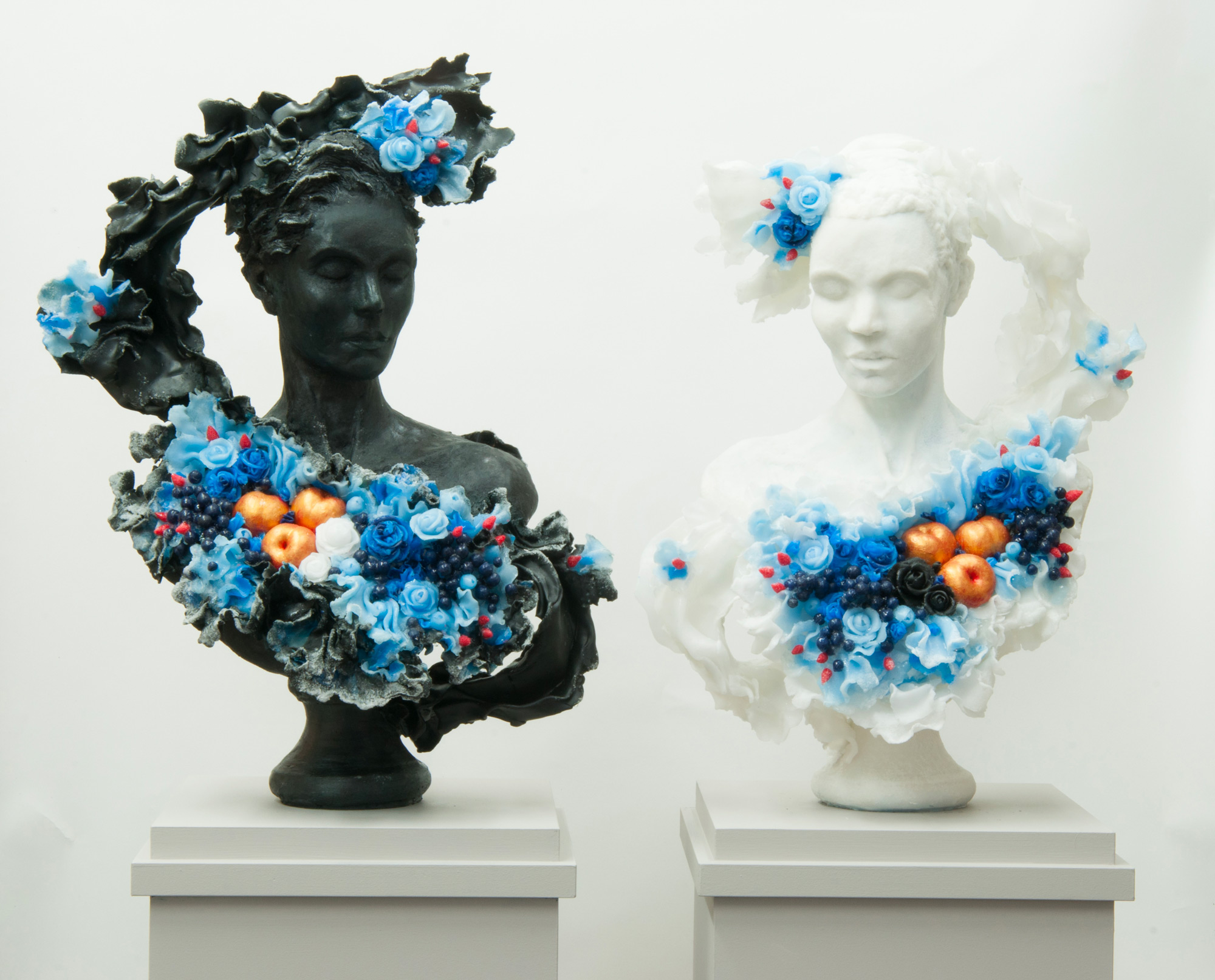 The sweet and the sinister commingle in Rebecca Stevenson‘s wax sculptures that depict humans and animals bursting open to reveal flowers and fruits. Classical busts and seemingly deceased animals are surrounded by ribboning cascades of plants. To create her sculptures, Stevenson starts by modeling the animal or figure in clay, and then moulds and casts the model with layered resin and wax. Stevenson then cuts open and reworks the sculpture, a process both surgical and artistic, as she decides which elements to dis- or re-figure, and which to leave alone. “These actions supplant or corrupt the object’s original meaning…a desire both to reveal and to mask the inside of things derives from my student experiences of drawing from cadavers and dissections,” the artist explains.

“Creating ‘wounds’ or openings in the work undoes the sense of a clear boundary between object and viewer,” says Stevenson. “The viewer may be invited to gaze deep inside the object, a ‘non-sculptural’, intimate experience of looking.” This experience subverts the traditional narrative of sculpture as a vessel for heroism, crafted from the hard media of stone and metal and meant to be admired from afar.

Stevenson tells Colossal that she began working in wax as a student, fascinated by its translucence and its ability to closely mimic other materials and textures. “Over time, its material properties of fluidity and mutability, as well as its historical associations, have become intrinsically linked to the meaning of my work,” she says. “Wax is traditionally associated with the creation of doubles or stand-ins for the human body,” the artist explains. “Whether used to create votive objects, funeral effigies or life size simulacra of contemporary celebrities, wax is so explicitly visceral that it not simply represents flesh: it is transubstantial.” Stevenson cites the anatomical wax figures of La Specola, Florence’s zoology and natural history museum, as a particular influence on her early practice.

As her work progressed, Stevenson also began to draw inspiration from Baroque sculpture and Dutch still life painting. “While remaining fascinated by the interplay between interior and surface, I also began to explore the visual experience and the meaning of excess, of sensual overload, of ornament and detail as a means to attract and repel the viewer.” The initially alluring decorations become somewhat sickly upon closer examination, sparking reflections on transformation, generation and decay.

If you’re in Berlin, catch her work through October 31, 2019 as part of a group exhibition at the Wunderkammer Olbricht. The artist also has work on display at Kunstmuseum Villa Zanders as part of the 50 Years of the Kraft Collection, and in So Beautiful it Hurts at James Freeman Gallery in London. Explore more of Stevenson’s sculptures on her website and Instagram.