“My grandmother’s china.” All images © Glen Taylor, shared with permission

Artist Glen Taylor solders ridges of metal to porcelain fragments, completing a halved teacup or broken saucer with a range of unusual materials: barbed wire, tarnished silverware, old book pages, and multicolored twine form a portion of the household objects. Each intervention contrasts the pristine, delicate qualities of the porcelain with the visible rust, unwieldy strings, and patchwork metals.

A cabinetmaker for much of his life, Taylor originally worked with pottery but found it limiting until he started breaking his ceramics into pieces. “I had read about the ancient art of Kintsugi and decades before I had learned how to copper foil and solder stained glass windows. All of a sudden I felt the emotional expressive range was infinite,” he writes. A Japanese art form, Kintsugi is the process of fixing broken pottery and celebrating the repairs, rather than try to hide them.

Now, Taylor gathers materials at auctions and estate sales, choosing pieces that spur an emotional response or nostalgia for his childhood, although some objects have a more personal connection. “For years, I have had my grandmother’s dishes in the attic, wondering what to do with them,” he says. “My mother died last year and so I have let the grieving process appear when it needs to. I released a lot of emotions about my mother when I started breaking the dishes that she grew up with.”

The artist tells Colossal that the broken pieces also are symbolic of imperfection. “As I began mending and recreating my broken pottery, the personal therapy and healing became the whole point,” he says. “I reached an age where I began sorting through the emotional baggage of my life, and the elements for my work became apparent.”

For a deeper look into Taylor’s mended works and a glimpse at his process, follow him Instagram. 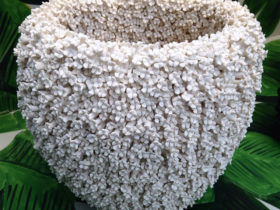