Belgian artist Adele Renault (previously) has an unparalleled ability to turn an urban nuisance into an extraordinarily beautiful creature. Her oversized pigeons grace walls in cities around the world, creating public artworks that celebrate her favored subjects in the exact locations they’re often overlooked and disregarded.

A few years ago, Renault began what she calls “wandering in the macro world,” a venture that shifted her focus to the individual feathers she’s always found most alluring. “The texture is more dazzling and intriguing than showing the whole thing,” she says. “The feathers have become my own language in a way. I now create them without photo reference, more like a meditative practice that creates textures and softness as a result.” Her murals have since strayed from portraying full birds to focusing instead on clusters of plumes and the individual barbs that sprout in layers and tufts.

Although Renault is dedicated to realistic forms, her more recent artworks play with color, injecting bright rainbow hues where she previously focused on naturally occurring blues and purples. The vibrant feathers radiate with an oily, iridescent sheen and appear to ruffle on the wall, a trompe-l’œil effect she achieves by meticulously coating either oil or spray paint to create depth and shadow.

A few of Renault’s smaller works on canvas are on view at Moberg Gallery in Des Moines through the end of June, and she’s currently preparing for a solo show in Belgium that’ll feature her Plantasia series, which similarly extracts minuscule details from leaves. You can find out more about her practice in Gutter Paradise, which was published late last year, and follow her on Instagram to stay up-to-date with her latest projects. 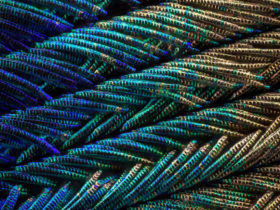