“An Escape Plan.” All images © Nicholas Moegly, shared with permission

In Nicholas Moegly’s shadow-laden illustrations, wild animals descend on backyards and unoccupied streets illuminated by artificial lights. The Cincinnati-based artist largely focuses on the quiet, mundane landscapes of Midwestern suburbia, although each of his works features surreal details that shroud the scenes in mystery: a lamp with no apparent electricity source lies haphazardly on the sidewalk, an empty car veers off a driveway with headlights still shining, and deer nibble on grass strangely close to a small tent.

Nostalgic and born out of urban isolation, the ongoing series contrasts the natural and manufactured and familiar and unknown, themes inspired by the ongoing pandemic. “My career used to primarily consist of creating gig/tour posters for larger bands, but in early 2020 when concerts were all canceled, so was all of my work. With nothing else to do, I began taking nightly walks around my town and the inspiration for my current work was found,” the artist shares.

Prints of the illustrated series are currently sold out, so keep an eye on Moegly’s Instagram for news about the limited-edition work he’ll be releasing in his shop later this month. Detail of “A Shiny Object” Detail of “An Ocean Between” 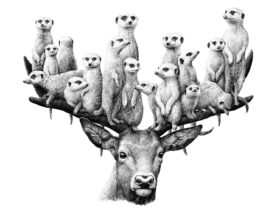