D. Allan Drummond (previously) is an associate professor of biochemistry, molecular biology, and human genetics at the University of Chicago. A few years ago Drummond began turning his extensive research of fossils and prehistoric sea creatures into detailed computer renderings which he then 3D prints and casts in bronze. Although many of his sculptures are inspired by ancient creatures like the trilobite, which existed for over 270 million years before its extinction 250 years ago, he also creates modern-day insects such as praying mantises and large bug-eyed jumping spiders.

Drummond currently has a solo exhibition titled “Curiosity” at Roq La Rue Gallery in Seattle through January 6th, 2019. In addition to several large individual sculptures, the show features a grid of wall-mounted trilobites that pay homage to the work of the 19th-century illustrator and naturalist Ernst Haeckel. Visitors are encouraged to remove the bronze pieces to explore the underside in greater detail—a part of the creature which is often eroded in fossils over time. You can see more of Drummond’s metal recreations of animals past and present on Instagram. 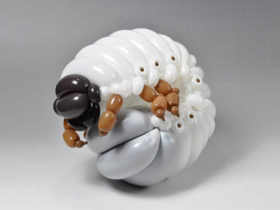