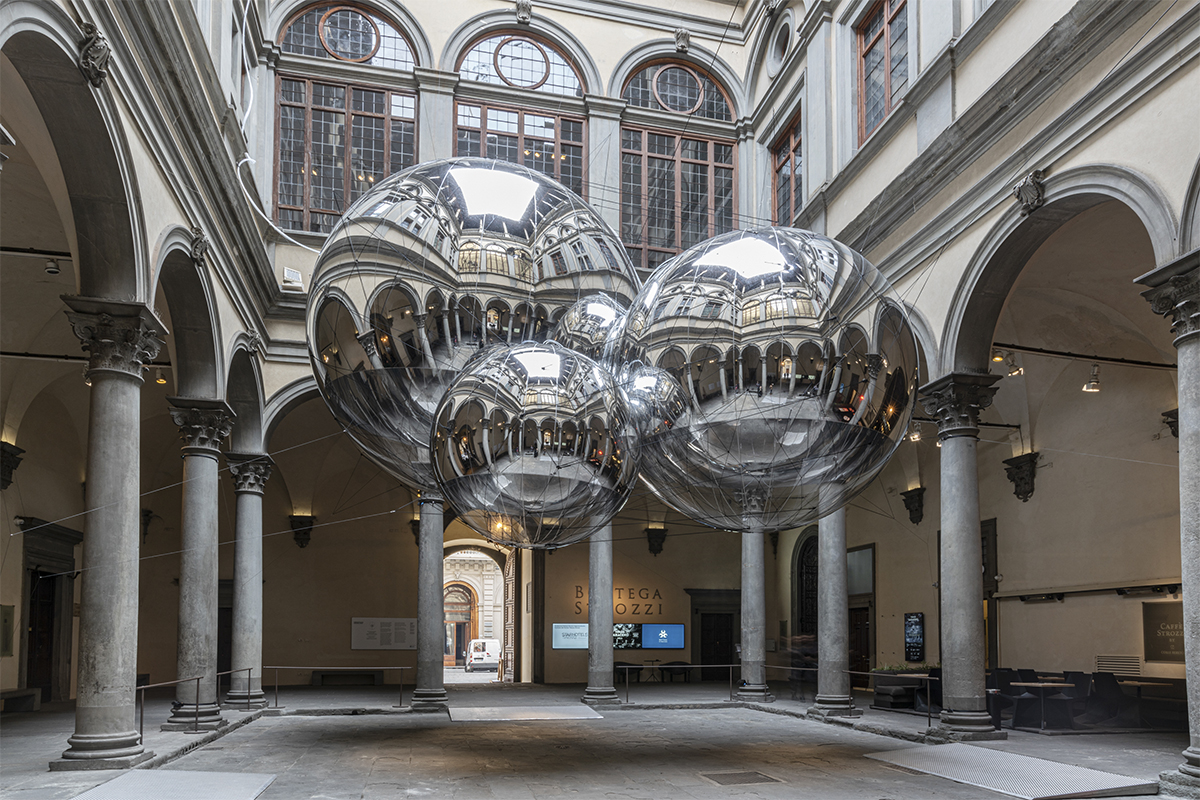 Three reflective spheres hover above the courtyard of Florence’s Palazzo Strozzi in Tomás Saraceno’s immersive installation.  The metallic orbs mirror the historic Renaissance architecture in addition to visitors who pass by, while marking the entrance to the imagined space that explores life beyond anthropocentrism. As its name suggests, Aria is concerned with air, encompassing human travel, its ability to foster growth, and how it’s entwined with every living organism.

The Argentinian artist (previously) is known for his large-scale works that fall at the intersection of science and art and consider the human toll on the natural world. Throughout Aria are various experiences dealing with contemporary environmental issues: Glass forms hang from the ceiling and house Tillandsia plants, which need only air to survive, while “A Thermodynamic Imaginary” considers the immensity of the sun and its unused potential.

Each of the works also references one of Saraceno’s 33 arachnomancy cards that explore ecological interconnectivity. References to arachnids manifest in the complex systems that hold Weaire–Phelan structures in “Connectome” or in the stark “Aerographies,” a series of clear balloons and framed networks that explore how “the movements of people, heat, animals, and spider/webs affect and are affected by the air,” a statement from Saraceno says.

Ecosystems have to be thought of as webs of interactions, within which each living being’s ecology co‐evolves, together with those of others. By focusing less on individuals and more on reciprocal relationships, we might think beyond what means are necessary to control our environments and more on the shared formation of our quotidian.

If you’re in Florence, stop by the Palazzo Strozzi to see Saraceno’s work before it closes on November 1, 2020. Otherwise, find out more about what he has planned for the rest of the year, which includes a new solar-powered balloon, on his site and Instagram. (via This Isn’t Happiness)