All images by Christian Gerard, courtesy of Lisa Waud, shared with permission

Port Austin, Michigan, is a picturesque village on the Lake Huron shoreline lauded for its beaches, water sports, and vegetable-shaped rock formations. With a population in the hundreds, the small community relies heavily on tourism to fund its economy, a reality Detroit-based botanical artist Lisa Waud contended with in a recent pop-up installation in one of the town’s abandoned convenience stores.

Titled “Party Store”—this colloquialism refers to a small shop selling snacks, alcohol, lottery tickets, and other cheap staples—the immersive project transforms a dilapidated space into a lush garden of fresh-cut flowers grown in Michigan and artificial replicas sourced from resale shops around the state. A water-damaged drop ceiling, stained carpeting, and wood paneling peek through the colorful botanicals, which envelop a commercial coffee machine, crawl across shelving, and bulge out of dimly lit coolers. Similar to her other site-specific works like her 2015 transformation of a condemned duplex in Detroit, Waud describes “Party Store” as a “cleansing reset,” one that uses the tension between life and decay as a prompt to consider cultural understandings of permanence and disposability. She references pieces like Robin Frohardt’s grocery store stocked with plastic food and Prada Marfa as influences, two large-scale projects that criticize consumerism through their satirical imitations of common and luxury goods. “In spending time in Port Austin, I recognized a similarity between its tourism culture and that of my hometown of Petoskey,” Waud writes in a statement. “The local economy relies on the tourists, but often the folks who come can have a ‘disposable’ quality to their visit, exemplified in the increase of consuming convenient items—often packaged in single-use plastic.”

“Party Store” was dismantled after its July 16-18 run, when many of the materials were recycled or reused. “By installing flowers that will ultimately be composted into a space that historically sells items that cannot be biodegraded, I hoped to bridge a connection for responsible choice-making in its visitors’ future,” the artist says. 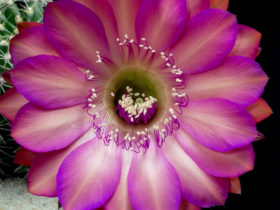