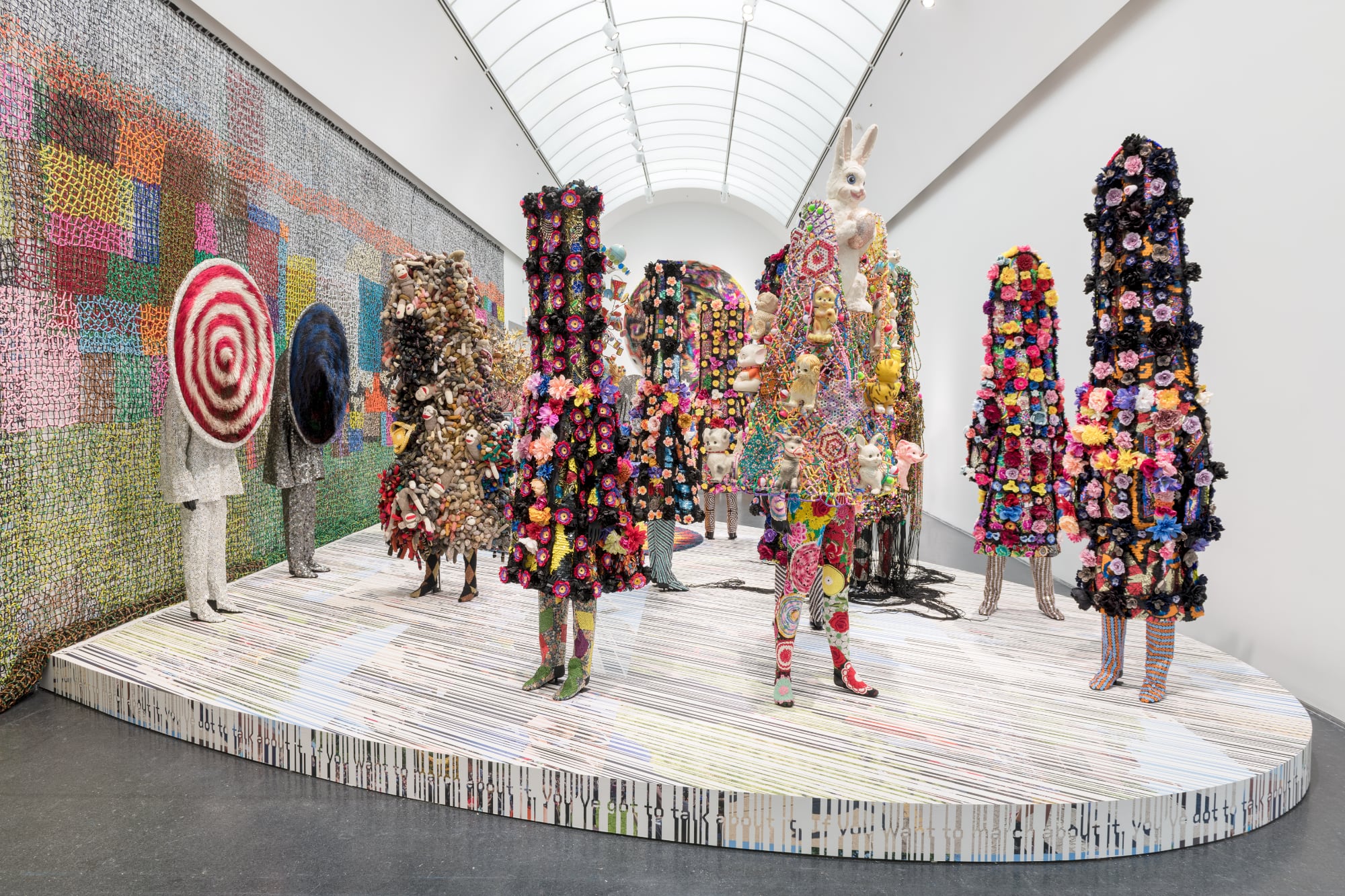 From floral Soundsuits and found-object sculptures to a multicolor web of millions of pony beads, Forothermore surveys the 30-plus-year career of artist Nick Cave. The retrospective, which draws its name from “forevermore” and “for others,” opened last week at the Museum of Contemporary Art in Chicago and captures both the evolution and mainstays of the artist’s practice. Cave spoke with Colossal in an interview ahead of the show, saying, “Why now, why now this moment, why this exhibition, why this survey, and who is it for? Once I removed myself from it, I realized that it’s not for me. It really allowed me to take a course of action in terms of that movement and what will this look like, looking at three and a half decades of work.”

Arranged thematically rather than chronologically, the exhibition opens with an iteration of the metallic wind spinners that were part of Cave’s 2017 show at MASS MoCA. Guns, bullets, and teardrops are embedded in some of the kinetic pieces that hang alongside smiling faces and peace signs. These sinister symbols pervade the suspended installation, which considers how a desire to only see beauty can mask painful, life-threatening issues. Heavily patterned vinyl wallpaper designed in collaboration with Cave’s partner Bob Faust runs through much of the show and creates a textured backdrop for the artist’s mixed-media assemblages of kitsch figurines, vintage furniture, and other trinkets. Dozens of his signature Soundsuits stand inside the fourth-floor gallery, including the mournful piece veiled in 929 black flowers that was created in response to George Floyd’s murder. Wall sculptures made of items sourced from flea markets—these include rusted tools, dominos, wooden boards, button-up shirts, and glittering orbs—date back to the 90s and surround the vibrant, armor-like costumes.

Cave created the first Soundsuit following Rodney King’s beating in 1991, and he’s never wavered from confronting racism in his works. “As I’m trying to imagine other ways of thinking and making, I’m constantly being brought back to this, unfortunately,” he says. The exhibition also includes a collection of bronze arms cradling sprawling, metallic bouquets with hands often clenched and raised in a fist, a reference to strength and solidarity in the face of rampant injustice.

Forothermore is on view in Chicago through October 2, when it will travel to the Guggenheim in New York City for an exhibition opening on November 18. You can read the full interview with Cave here, and find more from the artist on Instagram.